Since the Talvor/Apollo group obtained the rights to use the Winnebago name in Australia, the manufacturer has been steadily building its range of Winnebago-branded caravans and motorhomes. Although the initial plan was for a significant amount of US input into the RV manufacture, a relatively poor US/Australian exchange rate has seen much of the production happen here in Australia.

One of the latest motorhomes to appear out of Winnebago’s Northgate, Qld, premises is the Burleigh. It’s layout is a little different to the conventional but, otherwise, boasts a considerable number of standard features.

For the Burleigh, Winnebago has opted to use an Iveco Daily 50C170 cab chassis. Translating the numbers, that means it comes with a 5200kg (down-rated to 4495kg in this instance) cab chassis with a 170hp (125kW) single-stage turbodiesel 3L engine. 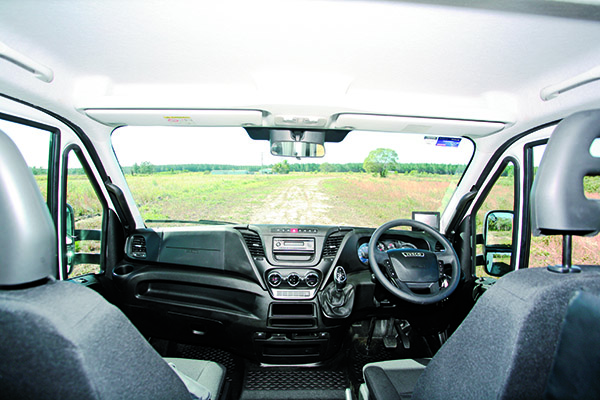 Like many motorhome manufacturers, Winnebago is starting to use the Iveco Daily in greater numbers. It’s seen as a nice compromise between the front-wheel-drive Fiat Ducato and the more expensive Mercedes-Benz.

Certainly, the 125kW turbodiesel handled the Burleigh without difficulty and the eight-speed gearbox is always a winner. If you want a bit more grunt, then the up-rated 205hp (150kW) twin-stage turbo engine is also available. On the road, there were no particular problems with the Burleigh although, being one of the first models out of the factory, there were a few more creaks and groans than usual.

With a Tare weight of 3900kg, the Burleigh has a load capacity of nearly 600kg, but if that isn’t enough, the 5200kg chassis can be ordered, although you will then require a light rigid licence to drive it. The Burleigh can come fitted with either four or six seat belts, but the latter is only available with the 5200kg-rated chassis.

Fibreglass is one of the major components of the body construction, which is comprised of single-piece composite walls and a roof with a gel-coated exterior. Both the rear wall and Luton peak are fully-moulded fibreglass. Composite panel is also used for the floor, but with a plywood top.

Given the body design, there are no lower external bins, but the under-seat storage at the rear is accessible externally either side via different-sized bin doors. The reason for this is that the nearside bin area is much larger but awkwardly split by a structural component. Also along the nearside are the essential compartments for the gas cylinder bin and Thetford cassette toilet.

The under-awning activities are handled by a gas bayonet fitting, 240V/12V/5V sockets, a TV antenna connection and external speakers, which are connected to the Fusion radio unit inside the motorhome. Because of the shape of the motorhome body and the related fixing point issues, the awning does not cover the entry door which, apart from anything else, makes having a full-undercover annexe area a bit difficult.

In the catering department, the kitchen has a surprising amount of drawer and overhead locker space, in addition to a three-burner cooktop, oven and grill, and a stainless steel sink. Some of the overhead lockers are fitted with an extra shelf but the end one, located by the entry door, is conveniently devoted to the electrical controls and comes with its own light. The rest of the kitchen fittings – the Dometic 190L fridge and Camec microwave – are fitted between the dinette and shower cubicle opposite.

If you’re travelling with four people, the split bathroom setup is quite a practical one. In addition to the Thetford cassette, the toilet cubicle also comes with a small vanity cabinet with wash basin and two-door cupboard below, along with a mirrored shaving cabinet above. A point of note here is the ventilation – in addition to the usual fan vent hatch, there is also a reasonably-sized window. There are no surprises in the shower cubicle, with its conventional variable-height, flexible-hose shower rose.

As noted, the rear club lounge is a typical NZ style with seats and windows all-round. It’s quite comfortable and includes overhead lockers as well as both an upper and lower cupboard at the end of the seat, up against the shower cubicle wall. The upper cupboard has a mounting point for the flatscreen TV, but it’s in a fixed position so the viewing angle is restricted. The shelf under the TV mounting is handy for drinks and is also a good spot to store phones and tablets while being charged.

Making up the bed isn’t too difficult – it’s just a matter of fitting the bed base in the middle and infilling with side cushions. However, the bed base/table is stored on the Luton bed when not being used and it’s not particularly light.

Anyone who really likes a rear club lounge with its all-round views is going to be really happy with this Burleigh. And I suspect that if Winnebago can get the weight down a bit, then this layout certainly lends itself to an elevating bed in the rear, thus offering several bed options on the same basic layout.