I’m perpetually amused by some of the names given to caravans and motorhomes. Some are quite logical, some follow a theme, some seem to be flights of fancy and some just don’t make any sense at all!

Winnebago has a long-established tradition of naming its RVs after well-known Australian locations and it continues that theme with the Winnebago Bondi. The Bondi has a nice Aussie beach culture ring to it, bringing to mind the freedom of endless summers by the surf. However, the name could have different connotations for some Sydneysiders. Anyone from Sydney or those familiar with the coastal eastern suburbs around Bondi will know that there is an ongoing problem for local residents, caused by backpackers travelling in campervans who stay overnight (or longer) parked in the local streets and car parks.

This Bondi is, however, a cut above those budget campervans! 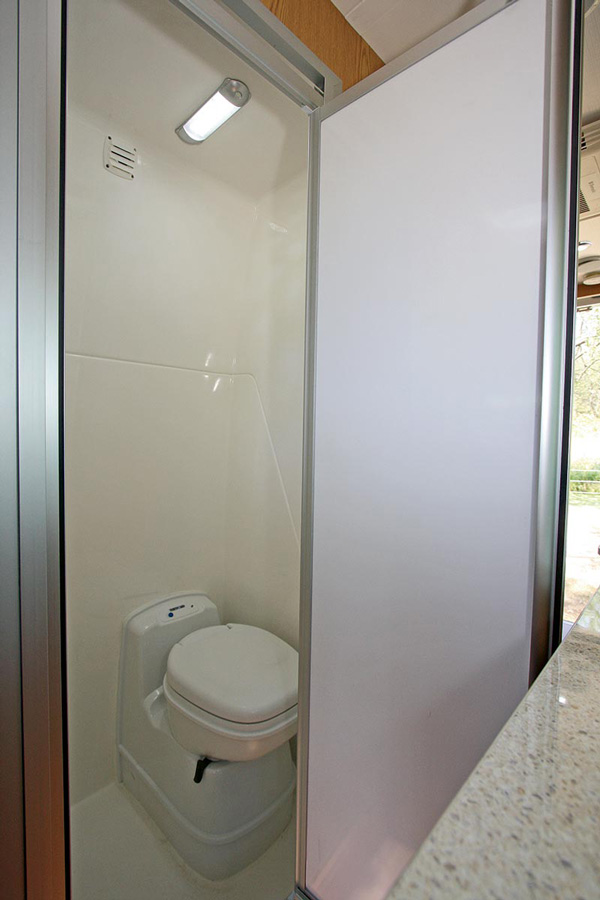 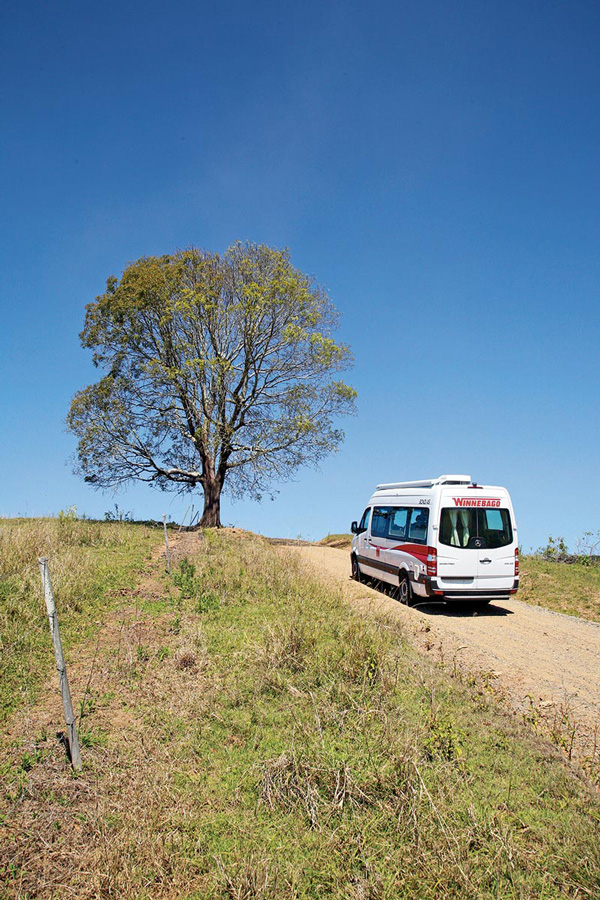 Climbing inside the Bondi reveals a pretty familiar layout for a van conversions, as there is only a limited number of practical arrangements. There are two sideways-facing lounges in the rear which can be made up into a north-south bed. The offside bathroom and nearside kitchen bench take up the middle of the van, leaving the swivelling cab seats which integrate nicely with the rear passenger seats to form a dinette in the front.

This front seating arrangement is quite advantageous, as it means the rear bed can be left made up, and it makes full use of the area. The front cab and dinette seats can all be used for transporting passengers (four in total), as well as providing a place to lounge and dine when camping. The 4S in the Bondi’s name refers to its ability to carry four passengers, making it a more practical vehicle for getting around town. But while it can carry four people, the Bondi only sleeps two.

The bed is easy to set up and requires fitting the bed base in position and moving the seat back cushions. You can even ask for the optional electric drive for the bed base. If fitted, it’s located under the offside seat.

Making up the bed with sheets and blankets takes a little longer than normal but the overall advantage of this particular layout is that the rear bed can be left made up, as there is additional seating in the front of the van, saving you the trouble of having to remake it each day. One thing that is missing, though, are reading lights above the bed.

General storage in the rear is quite good. There are overhead lockers along both sides and the usual under-seat compartments. The lower compartments are arranged differently on each side, the offside with side-opening doors and the nearside with less easy to get at top hatches. Much of the nearside compartment is taken by the hot water heater, wheel arch, battery and battery charger.

Any kitchen in a motorhome of this size will be a mixture of compromise and practicality. By the entry door, the bench profile is angled back to facilitate easy access and that also creates extra cupboard and benchtop space.

A stainless steel sink and a three-burner Dometic cooktop are fitted into the bench, leaving the area underneath for the 80L Waeco 12V compressor fridge. There’s a small adjoining cupboard but it’s mostly taken up by plumbing and the water filter. There isn’t a grill but a microwave is fitted into the overhead lockers. Powerpoints are always a bit difficult to locate in this type of kitchen but the under-locker socket works well enough and can also be used by someone sitting in the rear seat.

Opposite the kitchen is a large door, behind which is the bathroom and also a narrow wardrobe complete with hanging rack. A couple of lower shelves wouldn’t go amiss here. The bathroom has all the usual fittings – a variable height, flexible hose shower and a Thetford cassette toilet – although there is no vent fan, which would be useful. But it’s big enough in there to turn around without banging your elbows too badly.

The Bondi 4S has a very workable layout, although I felt it betrayed its rental origins somewhat inside. It’s also a very practical layout – the highlights are being able to carry passengers around, and being able to leave the rear bed made up.

Not only does this style of motorhome perfectly suit a travelling couple, it’s also very handy for solo travellers, or anyone who likes the simple security of having all facilities onboard for nighttime use. The Winnebago Bondi 4S certainly has plenty to offer.