Last year, Avida celebrated 50 years of manufacturing in the Australian recreational vehicle industry. By anyone’s standards, especially in today’s manufacturing climate, that is something to get excited about.

As part of the celebrations, Avida produced a special 50th Anniversary Topaz caravan, which we first reviewed back in CW543 (Nov ‘15) and which also competed in the $80K+ category at the recent Best Aussie Vans event, featured in CW546. Avida also released this Esperance B7943 motorhome, which was launched at the Avida 50th Anniversary dinner late last year. It’s not actually a new model but it comes with a few extra goodies in honour of this special occasion.

The 50th Anniversary Esperance looks very striking. Avida has been a bit bold by incorporating part of its logo into the new decals and it looks really good. It’s a rear entry motorhome with Hehr doors and windows, and I particularly like the glass windows, which are narrow hoppers, meaning they can be opened for good air flow but don’t stick out too far. I would prefer a security door fitted as standard, though, instead of the screen door. 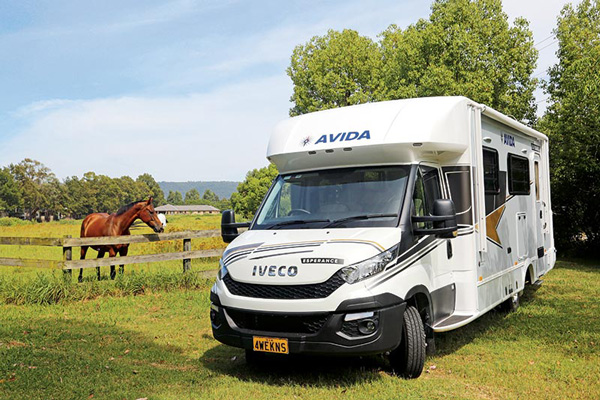 One of the first things I did once I had my hands on the Esperance keys was to head up the Old Bathurst Road west of Avida’s Emu Plains, NSW, premises into the Blue Mountains. It’s a hilly, winding road and I gave the new eight-speed a good workout and found the new gearbox to be a vast improvement over the old AMT gearbox, which could never make up its mind which lower range gear it should be using. The motorhome wasn’t fully-loaded, but the Iveco Australia team says that shouldn’t really change things.

While most Esperance layouts have a slide-out, this one doesn’t. Instead, Avida has fitted an elevating bed right behind the driver’s cab. That leaves a good deal of room for a lounge underneath, a kitchen/dinette in the middle of the motorhome and a bathroom across the rear. It also means very easy access to and from the driver’s cab, especially with the cab seats swivelled around.

To lower the bed for sleeping, the seat backs must first be removed from the lounge. But one of the advantages of this particular arrangement is that the bed can be left made up even in the raised position. You just need to move the pillows and there’s a locker in the Luton peak over the driver’s cab where you can store them. The bed is quite easy to make up anyway, as you can have a person standing on either side. When the bed is in the fully-lowered position the ceiling mounted reading lights are a bit of a reach, though.

One disadvantage of the elevating bed is that it’s not possible to use the lounge and the bed at the same time, which could be an issue if you and your travelling partner like to go to bed at different times. However, the cafe-style dinette is a very reasonable alternative, especially as the tri-fold table can be pushed back.

The kitchen has excellent storage, with good-sized drawers, overhead lockers with shelves and a Waeco wine cooler. There’s a wire basket pantry at the forward end of the kitchen bench that has a solid top that can be used as a bench extension. In addition, there’s a full-height, slide-out wire basket pantry against the bathroom wall.

The kitchen comes with all the usual features – a four-burner cooktop with grill and oven, stainless steel sink and drainer, and a 190L Dometic fridge with a microwave above. It’s actually a very workable kitchen that should keep most travelling chefs happy. Conveniently, the Webasto diesel heater and Truma water heater controls, along with several light switches, are located under the sink.

Fitted into the rear nearside corner by the entry door is a handy, narrow wardrobe, which means the rear bathroom isn’t quite full width. This isn’t an issue, though, as the bathroom still comes with all the expected features, including a nearside shower cubicle, an offside Dometic cassette toilet and a vanity cabinet complete with a 50th Anniversary ceramic bowl wash basin! There is no washing machine, but the offside corner cabinet can easily be converted to take one. There’s also a cupboard under the sink and overhead lockers along the offside wall.

This 50th Anniversary Esperance comes with all the normal features of Esperance models with the bonus of a few special additions. For people who aren’t fans of slide-outs, the electric bed offers a very generous internal living area. Overall, the layout results in a versatile and classy motorhome – undoubtedly befitting of the anniversary model!