Trakka has been building their Fiat Ducato based Torino, a large van conversion, for a number of years now. Always very popular, it has been something of an evolving design which reflects not only customer feedback but also the latest technology and materials available.

My latest model Torino was built on one of the new generation Fiat Ducatos although, if you don’t know what you’re looking for, it’s a bit hard to tell. The front body area has a new look with higher headlights and the bumper bar is now made from more individual components, which makes things easier in the event of an accident.

Inside the cab, the instrument panel has had a bit of a makeover but undoubtedly the most exciting thing is the upgraded radio which is more a multimedia unit. Although this model did not have the Sat/nav feature, I understand it is on the drawing board for later models. In the interim, the Ducato will still come with a TomTom unit as standard. 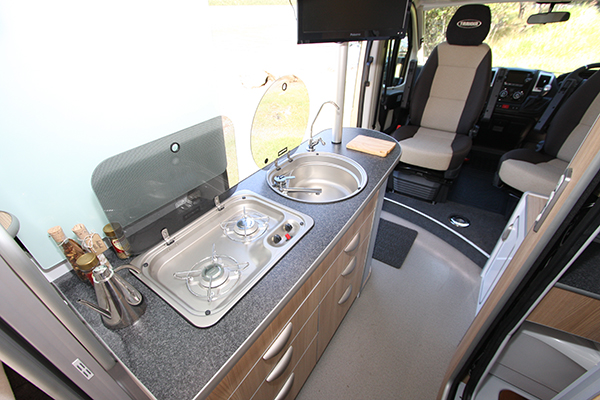 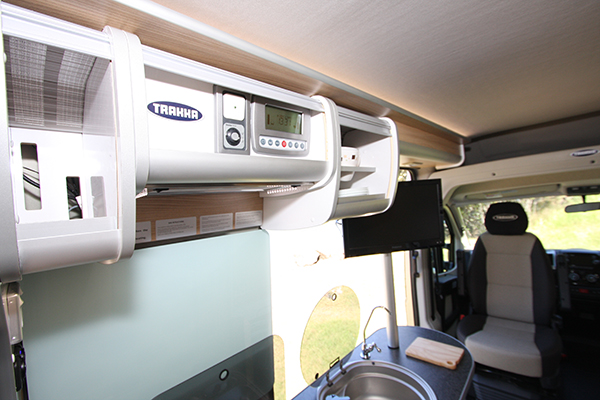 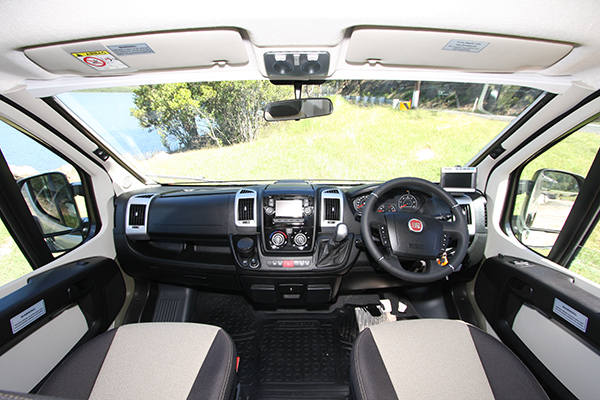 Although it does take up more space, Trakka has opted for a north-south arrangement of the bed(s) in the rear in this Torino. This allows for the kitchen bench along the nearside wall, the bathroom cubicle opposite and the fridge/microwave oven behind the driver’s seat.

Both cab seats swivel around, providing comfortable seats to relax in while offering good back support at the same time. An alternative Trakka design, the Torino Xtra, does come with an east-west bed to allow for an extra passenger seat behind the driver.

The asset of the north-south layout is that it allows for a longer bed than is otherwise available. With this arrangement, Trakka has opted for maximum flexibility. The choice is either a double bed measuring 1.9x1.8m (6ft 3in x 6ft) or two single beds, both being 700mm (2ft 4in) with the offside one measuring 2m (6ft 7in) and the nearside being slightly shorter at 1.9m (6ft 3in).

I should also point out that the single beds do have a wider top half (nearest the rear doors) but narrow down towards the feet. This is so the foot of the beds can also be used as seating in conjunction with the pole-mounted table that fits in between. There’s also a portable drawer cabinet that can either sit between the single beds or hide in the little wardrobe that uses the air space above the foot of the offside bed.

The kitchen bench is quite a simple setup. Fitted into the benchtop are both a two-burner cooktop and a round stainless steel sink (sans drainer), both with smoked glass lids. Fitted under the bench are six drawers of various sizes, while the curved end-of-bench cupboard complete with shelves is enclosed by a Trakka-style roller shutter door.

Good for space saving and easily accessible from both inside and outside the van. Two smallish overhead lockers are fitted into the air space above the kitchen bench, while the third in the middle acts as the easy-to-use electrical control panel.

A non-kitchen feature in this area is the flatscreen TV, pole-mounted at the end of the kitchen bench. It looks a bit like it’s stuck in the doorway but it’s really an ideal viewing point from both outside and from the swivelled cab seats or, with bit of a fiddle, from the beds in the rear.

Trakka has made the most of their bathroom design with their patented Switch Mode Bathroom. The toilet hides under the bathroom wash basin until needed and then a push of the remote control button brings it out in position, ready for use. Having the cassette toilet out of the way allows for plenty of shower room. The moulded bathroom isn’t just a white box and the wash basin area looks particularly classy. A neat feature is the three-sided mirror with LED strip lighting inserts.

It’s easy to see how the Torino has evolved, with many of the little improvements making life on the road so much more comfortable. There’s no doubt the flexibility of the rear bed/lounge arrangement is going to add to the motorhome’s appeal. Sure, the Torino isn’t a large motorhome, but it is ideal for couples who don’t want a large road going unit and even better for singles who like the idea of a self-contained motorhome, but want a bit of space to move around in as well.