There is a bit of a downside to motorhomes for those who want a 4WD ride for serious offroad work. The availability of base vehicles is limited, so the options are few and far between, unless you have a very large budget.

The Tuff Roder is based on the SR model Hilux, which comes whith an excellent 3L turbodiesel engine and a five-speed auto gearbox. One of the issues with a Toyota Hilux is its GVM of 2835kg. This has caused a few motorhome manufacturers a bit of a headache and is one of the main reasons the Hilux is not as popular as its contemporaries among the fifth wheeler set.

The Tuff Roder’s body is built using fibreglass composite panels. I like the Seitz windows on both sides, especially the larger ones in the Luton peak. There are just two external bins available for storage – mid and rear nearside – as all the rest are dedicated to items such as the gas cylinder and toilet cassette tank. That’s not a major drama with a motorhome of this size, though, as travelling light is good practice. Like any good motorhome, the Tuff Roder has an awning and, in this case, it’s a Fiamma F45. 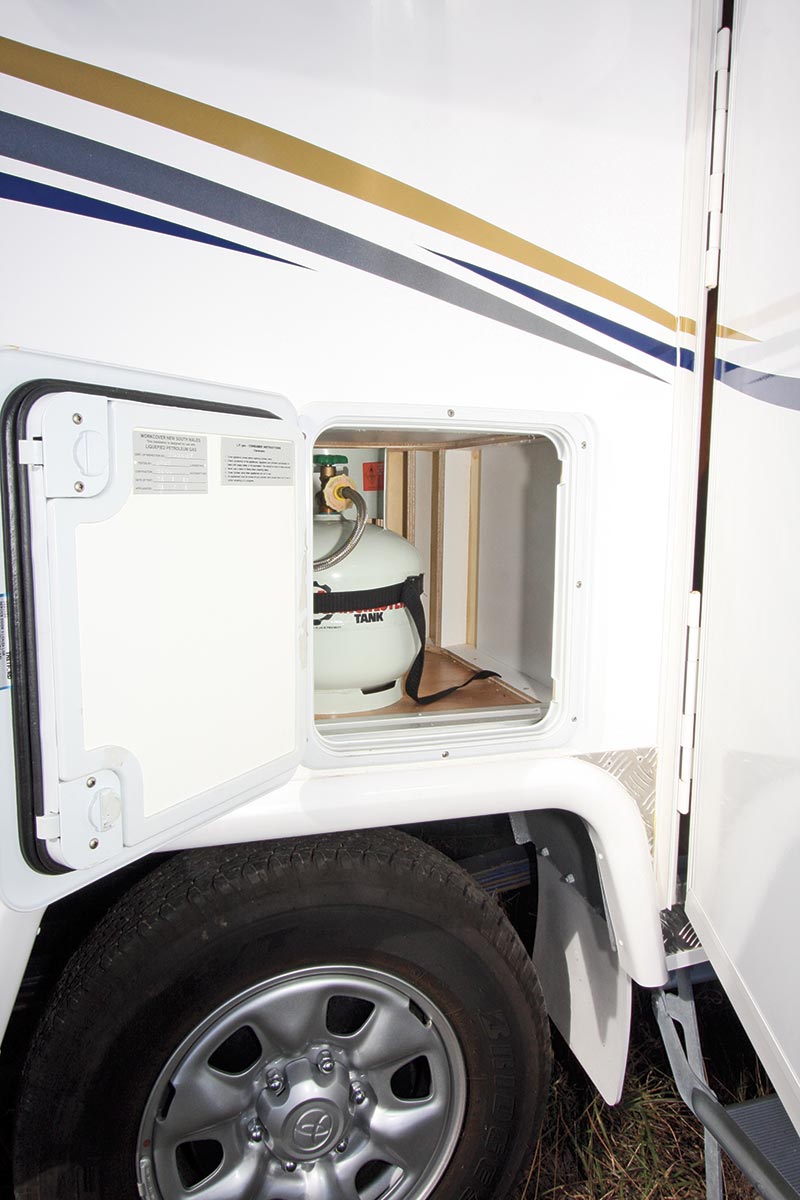 Most Hilux-style motorhomes feature an east-west bed and a lounge/dinette in the rear. But the increased GVM creates a little more flexibility in the layout. The Tuff Roder’s front bed design might look familiar to some readers – it’s the same as used in the Explorer Vision (also a Hilux-based motorhome) featured a couple of issues ago. It’s quite a clever arrangement.

The Luton houses two single beds, the ends of which can extend over the dinette (nearside) and kitchen bench (offside) for night time use. That leaves space for a bathroom across the rear.

All of the space along the nearside wall is taken up by the lounge/dinette, which has a Lagun swivel arm-mounted table. This is quite an effective arrangement because the table, with one chamfered corner, can be swivelled around easily to help you get in and out of the seat.

The size of the Tuff Roder’s kitchen is well worth mentioning. Given the external length of the motorhome, it’s quite a large setup. This is helped, in part, by the under-bench 90L fridge which allows extra bench space above. Also fitted into the benchtop are a Spinflo four-burner (all gas) cooktop and stainless steel sink with drainer. The cooktop has a flush top and the sink has a hinged glass top, which gives you even more food preparation space if you need it.

One of the major assets of a Toyota Hilux-based motorhome is that it gives the traveller plenty of flexibility as to where they travel. Its relatively small size might be seen as a disadvantage by those used to larger rigs, but it’s a definite advantage when driving along narrow bush tracks, as well as trying to park in the city. A great feature of this Hilux conversion is the uprated suspension and, consequently, the GVM.

Finally, of course, there’s the price. Apart from similar Hilux-based models and the Benz Sprinter van 4X4 conversions, there are few offroad motorhomes that are available at this price point.

The full test appeared in Caravan World #532 December 2014. Subscribe today for the latest caravan reviews and news every month!