Currently, the two vehicles of choice for campervan conversions are Volkswagen T5s and Toyota Hiaces – it’s been this way for many years. Various other vehicle manufacturers’ vans have been used from time to time for camper conversions, but the VeeDub and Hiace are the mainstays.

Like most campervans, setting up the Discoverer camper takes a matter of seconds. Open the sliding door, enter and undo the roof straps, and then lift it into position. Opening the canvas windows does wonders in terms of natural light and general ventilation – always appreciated in a confined space. 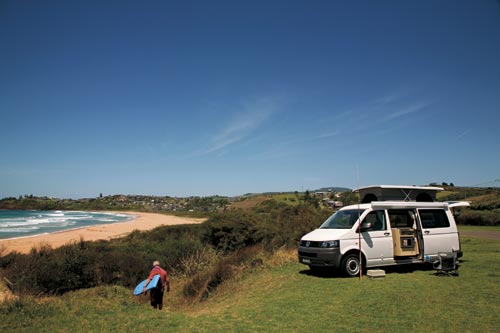 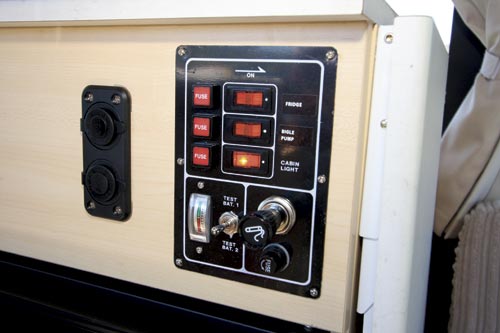 With the limited space available in a van such as the VW, there are only a few realistic layout variations. The two most popular are what is known as a ‘bed seat’, in which a rear seat for two people can be folded down to make up a bed, and the one seen here, which is essentially a twin-bed layout. This layout comprises two sideways facing lounges, along both walls, in the rear of the van.

It leaves room for a small kitchen cabinet behind the driver's seat, and a swing-out cabinet behind the passenger seat. The cabinetry is made from lightweight, laminated plywood. The advantage of the twin-bed layout is a walk-through to the rear doors, whereas the ‘bed seat’ layout can double as a passenger vehicle and carry four people.

At night, there are roof-mounted LED fittings to shed light on things, as well as LED reading lights above the beds. The 12V switch/fuse panel, located on the kitchen cabinet, is very handy, but more noteworthy is the 12V and 5V USB charger sockets adjoining it. All you need are the charger leads: not having to lug heavy chargers along is a real weight saver.

Campervan travel is the art of travelling lightly, of having gear that is not awkward to store, such as fold-up chairs and compact, rolled-up hoses. Both such items will fit under both lounges, hoses preferably in a plastic bin.

Part of the offside is taken up by the house battery and charger, along with the external shower hose, which is accessible from the rear. Both under-seat areas are accessed by removing the seat cushions and lifting the hinged seat bases. This is somewhat fiddly, though, but at least the nearside storage space can also be accessed from a hatch at the rear.

There are no surprises in the size of the kitchen. Campervan kitchens are inevitably going to be quite small but there should always be a degree of practicality. Behind the passenger seat, the swivel-mounted cabinet contains a microwave below and Origo two-burner cooktop above. The metho-fired cooktop is a little slower than LPG (which is an option) but does save on the space needed for a gas cylinder. Having the cooktop on a swivel mount means it can be used inside or out – it is definitely easier to use outside and thus minimising cooking odours indoors.

In some weird ways, campervans such as this twin-bed Discoverer are a little like the device Dr Who travels around in. The TARDIS is, from the outside, a circa-1950s/’60s British police box, its main characteristic being that it’s considerably bigger on the inside that it looks.

Now, the Discoverer campervan isn't blue – and isn't that good! – but it is still designed along the lines of practical living and maximising living space.

If the campervan/motorhome lifestyle is what you desire, but you have a very tight budget, then a campervan such as this Discoverer would be a great place to start.

The full test appeared in Caravan World #527, July 2014. Subscribe today for the latest caravan reviews and news every month!