EVERY NOW AND AGAIN in this business, I get to drive something a little out of the ordinary. This custom-built 4WD motorhome from Paradise Motor Homes fits that bill. It was built for a customer who demanded the best of everything, and for Paradise's Colin Maclean and sons Ben and Michael, it presented a number of design challenges. Something, I suspect, they secretly relished...

BUILDING THE MANSION
The base vehicle was a German-built MAN TGM 13.28 cab chassis, with a 6.9L 213kW turbodiesel engine and a mammoth 1100Nm of torque and 12-speed auto gearbox. In plain English, that means a go-anywhere vehicle. The MAN base vehicle also gave this Paradise creation a name - the Mansion.

This 4WD rig is fully equipped for the worst road conditions and comes with a modified airbag system, a front winch, and sand mats.

I know about the latter because we were forced to put them to the test while trying to get "back a bit further" for a photo.
All wheels are fitted with compressed-air connections, so tyre pressure can be adjusted from the driver's seat.

Although the Mansion might sound large, it's surprisingly compact at 7.9m (26ft) long and 2.48m (8ft 2in) wide. It is quite heavy, though, with a wet Tare of 10,300kg and an ATM of 13,000kg. That gives it a considerable load capacity, plus the need for a Medium Rigid truck licence.

In my admittedly cautious drive, I found being behind the wheel of the Mansion a very pleasant experience. It moved along very swiftly when needed, and sitting well above other vehicles is something I could get used to.

In addition to a rearview camera, there are also lenses showing the view down each side of the motorhome.

MILLION DOLLAR MAN
With its relatively rough-around-the-edges look, the Mansion does not look like a motorhome that cost more than $1m to build. Yes, that's a one with six zeroes.

But there was a reason for the low-key appearance; the customer wanted his motorhome to look fairly ordinary on the outside, but remain very special on the inside and under the bonnet.

In other words, the Mansion is something of a Q-ship - a historic form of warship that looked benign on the outside but housed concealed weaponry for surprise attacks. A wolf in sheep's clothing, as it were.

I'd seen this motorhome under construction a few times at the Paradise factory, but because of the owner's wishes, it was a bit of a hush-hush job. Now I knew why.

A FAMILIAR PROCESS
Building on the MAN cab chassis was something new for the Paradise team, and one of the challenges was the tilt cab. This hurdle was overcome by having an air seal specially manufactured in the US, which allowed not only for the cab tilt, but also for the cab and motorhome body to move independently of each other when travelling on rough roads.

Although the external appearance of the Mansion looks like no other Paradise motorhome, it is built in exactly the same way, using a composite wall structure that allows for slide-outs on either side.

The external finish is unique in that it is all manufactured from high tensile aluminium propeller plate, including the power window awnings and solar panel covers.

In order to keep the aluminium from being highly reflective, as well as reducing potential scratch damage, it has all been soda-blasted, giving it a dull and less noticeable appearance.

The result is something like a slightly odd-looking pantec truck. Odd-looking because the nearside is fitted with its own deck that lowers electrically to door level, plus electric steps and awning. So, it's a matter of pushing quite a few switches and the rig more or less sets itself up. The deck, I should mention, sits well off the ground and has its own fold-down railing.

In addition to external bins for general storage and items like the 4kVA generator, there is a small 'garage' at the offside rear that not only has room for assorted tools and 4WD recovery gear, but also a small motorbike. At the rear the spare wheel can be raised and lowered by its own special lift.

ENTRANCE HALL
Stepping inside the Mansion reveals an interior that closely reflects both the layout and style of most Paradise rigs. Where the outside looks different, the interior keeps things more standard.

With both slide-outs open there is loads of living space, even with the full-width rear bathroom, east-west bed against the offside, offside dinette and kitchen along the nearside.

Storage space is also very generous, including an enormous wardrobe opposite the bed.

A flat-floor motorhome wasn't possible with the MAN cab chassis, but both cab seats (which match the dinette seats) still swivel around and are fully usable when parked. The driver's cab is very well fitted out, but one of the more interesting additions is a General Dynamics (i.e., military spec) laptop on a swivel arm. This means it can be used from either cab seat, whichever way they are facing. The laptop is also attached to a Magellan GPS aerial and can be used by the passenger for navigation.

It has to be said that the appointment level in this motorhome is extremely high - the customer spared no expense in getting the latest and greatest of everything. The sound system, complete with surround speakers and sub-woofer, wouldn't disgrace a home theatre.

There are two fridges, a two-drawer Vitrifrigo 144L in the kitchen and a Vitrifrigo 75L freezer under the bed. One slight departure from the norm is that the Mansion does not have an LP gas system. The cooktop is a diesel-fired Webasto unit, as are the two air/water heaters. An inbuilt floor vacuum system keeps everything clean.

There is a full battery/inverter/solar panel system, and all of the lighting comes from LED fittings, for which there are electrical switches and controls everywhere.

For those dusty outback roads, there is even an onboard air pressurisation and filtering system, which cleans itself as the motorhome drives along.

THE BOTTOM LINE
If you are looking for a no-expense-spared, go-anywhere-but-live-in-comfort motorhome, the Paradise Mansion is it. While not everyone is going to want (or be able to afford) a motorhome of this calibre, RVers can be reassured that some of the technology developed on this rig is sure to be used on other Paradise products.

The Mansion demonstrates that when a high spec, purpose-built motorhome with a high level of engineering is required, an Australian manufacturer like Paradise can more than deliver. 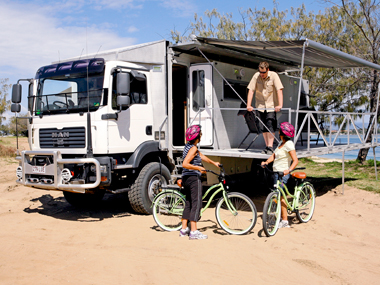 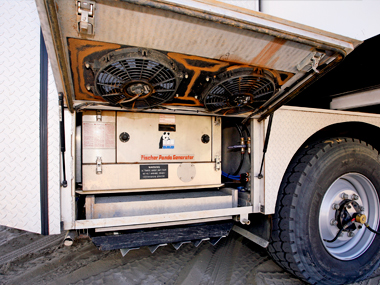