A bed that can be raised and lowered electrically is a design feature that’s becoming more and more common in motorhomes. It’s particularly convenient in smaller motorhomes, which frequently offer very flexible layouts.

Talvor’s Murana offers several living options within its 7.7m (25ft 3in) length. This manufacturer’s building experience comes from the Apollo rental operation, but the Talvor fleet certainly has a number of upmarket differences.

Underpinning the Murana is a Mercedes Benz Sprinter cab chassis. It’s powered by a standard 2.2L turbodiesel that delivers 120kW of power and a useful 330Nm of torque. The Benz comes with a six-speed, fully auto gearbox and, on the safety front, gets ABS brakes, an electronic stability program, and driver and passenger side airbags. The cab comes with all the usual features but, sadly, the radio/CD player is just a base level one. The reversing camera mounted on the right-hand side of the dashboard is a Talvor addition. 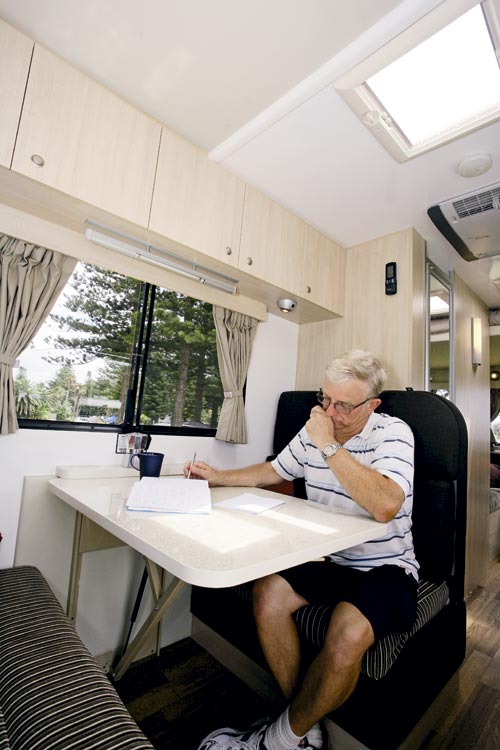 I gave the Murana a workout around the Palm Beach Peninsula and up through the Mt Kuring-gai National Park, NSW. It’s not a bad destination for a little bit of weekday exploration, especially since the nearby Lakeside Holiday Park, Narrabeen, offers plenty of camping sites.

With a composite fibreglass structure and moulded ends, the Murana is built as a B class motorhome, which means it is without a Luton peak. Entry is through a Hehr-style entry door, right behind the driver’s cab, with a separate non-security screen door. The sliding glass windows are an interesting choice over the popular hopper or larger acrylic style. The upside of the glass windows is they won’t scratch as easily. The downside: they can’t be left open in the rain.

Storage-wise, the Murana comes with a variety of external bins, each with a light. The largest bin is a through-boot across the rear. There are also bins on either side of the motorhome, though some of them are dedicated to housing items such as the 125Ah batteries (offside), two 4kg gas cylinders (nearside), and combo slide-out barbecue and entertainment unit, conveniently located mid-nearside. The entertainment unit comes with two speakers, a radio/CD player, 240V and 12V sockets, and a TV antenna point but no TV mounting bracket.

Inside the Murana is the aforementioned rear bed which can be raised and lowered, with a lounge underneath. Occupying the nearside wall is a kitchen bench, leaving enough space on the opposite wall for a bathroom and a dinette behind the driver’s seat.

Talvor has kept the driver’s cab more or less intact, so the seats don’t swivel around and the shelf above the cab doesn’t lift up out of the way, so climbing in and out is a little awkward.

While the cabinetry has an appealing, light and airy look about it, it also looks a bit squarish – an echo of Talvor’s rental origins, perhaps. Similarly, the lighting has good and bad points. There are plenty of light fittings but there are no ceiling lights in the kitchen and dining areas.

Measuring 1.9x1.37m (6ft 3in x 4ft 6in), the bed sits east-west above the lounge. It can be lowered to a level that requires a foot stool in order to climb aboard, unless the seat cushions either side are removed – which is a bit of a fiddly process. The bed sits above a club lounge that has windows on all three sides, giving a good view of everything that’s happening outside. Obviously, the bed precludes overhead lockers in this area, but there are under-seat storage options and a small wardrobe at the end of the kitchen bench.

Lighting can sometimes be an issue with multi-level beds but the wall lights illuminate the lounge (and bed when it’s lowered) nicely.

There’s nothing too radical about the kitchen, which comes with most of the things required in the modern motorhome. Filling the benchtop are a stainless steel sink with plastic detachable drainer and a four-burner cooktop, griller and oven. Some people might find using a detachable drainer annoying, but they allow for more benchtop space.

At the rear end of the kitchen bench, the 150L three-way fridge is mounted off the floor with a raised shelf above. Above the shelf you’ll find the microwave, built into the cabinetry. There are pluses and minuses to this setup. Having the microwave in the ‘raised’ position gives more shelf area below, but it will prove awkward for shorter people to use.

Kitchen storage consists of a cutlery drawer, a two-door cupboard and three overhead lockers. Part of the cupboard area is taken up by the housing for the external entertainment unit and one of the overhead lockers contains all of the 12V controls, hot water switch, battery voltmeter and water tank gauges.

Although the bathroom isn’t particularly large, Talvor has managed to provide a separate shower cubicle, Thetford cassette toilet, a small washbasin and a large wall mirror. There isn’t a window, however, and the roof hatch above the shower does not have a fan.

The dinette could handle two adults and two children without a problem around the large table, which has been designed to fold down quickly to allow the dinette to be made up into a bed. Both the forward-facing seats have been fitted with seat belts, so guests or the kids can tour along with you.

There’s no doubt electrically lifting beds add greatly to the design flexibility of a motorhome. In the Talvor Murana, the bed is reasonably easy to access and doesn’t have to be made up every night, and you even get a club lounge with a view.

In addition, the extra berths mean that occasional guests can be accommodated without too much difficulty. It all adds up to a very neat little package.