Motorhomes with rear tandem axles aren’t particularly common in Australia. Apart from coach conversions, most tandems are built with a Fiat Ducato cab bolted to an Al-Ko chassis, which allows Ducato-powered motorhomes to have a larger GVM than the common 4005kg.

A couple of years ago, the first Jayco Optimum built on an Al-Ko tandem-axle chassis appeared and since that time it’s had a few refinements. The latest, a slide-out, is a first for Jayco.

The extra axle and slide-out provide the Jayco C class Optimum with more room and flexibility in its layout, and with a GVM of 5000kg, more load capacity. It also means that it requires a Light Rigid truck licence to drive. That might be seen as a minus in some people’s eyes but given what’s been achieved on the design side, it’s not a bad trade. 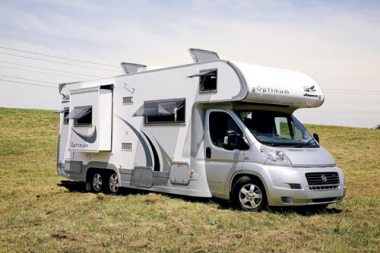 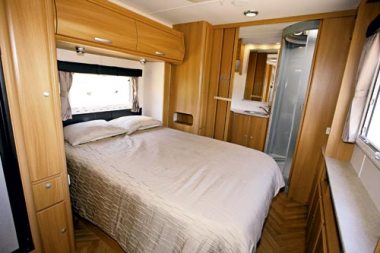 Powered by the mighty 115kW, 3L turbodiesel, the Ducato has no difficulty moving the Optimum with its extra length along – ours came with the AMT six-speed gearbox. Being a front-wheel-drive vehicle, there weren’t any of the usual traction problems that sometimes occur with rear-wheel-drive, tag-axle setups.

Given that the Optimum is the same width as the rest of the Jayco stable, there’s little difference when driving on the road. The only real thing to remember is that you need to take care with the extra length when turning sharp corners.

When a motorhome’s length increases, so too does its external bin space. On the Optimum there are three bins along the nearside and two on the offside. That does not include the gas locker for one 9kg and one 4.5kg cylinder behind the driver’s door. Speaking of doors, the entry is via a Roamsafe security door and the windows are Seitz hoppers. The major novelty, the slide-out, is at the offside rear.

The electric Carefree awning is another interesting item – push a button and it rolls out.

For the interior layout, Jayco opted for a full-width rear bathroom adjoining an east-west bedroom. The latter is built into the offside slide-out. Further forward, a nearside kitchen bench sits opposite a four-person dinette. Although Fiat has designed the driver’s seats with motorhomes in mind, the front cab isn’t fully utilised with only the passenger seat swivelling around.

The internal styling and décor are modest for a luxury rig but there are a few more features than you’d find in Jayco’s budget Conquest models. Ventilation is supplied by big hatches fore and aft, and there is a roof-mounted Coleman Mack air-conditioner. Many of the light fittings are LED with the rest being halogen.

The four-person dinette at the front has leather seats, with the rear seat having high backs and seat belts. A large window gives a good view of the countryside and there are overhead lockers and a small shelf above the dinette. Halogen downlights provide table and reading illumination, and a powerpoint is fitted to the base of the rear seat.

The 15in TV can be mounted on the cabinet fitted to the opposite side of the motorhome between the door and front cab.

The nearside kitchen contains a Smev four-burner cooktop, grill and oven. Alongside the stove is a stainless steel sink with drainer. There is a good supply of drawer space (five of different sizes), cupboards (two, one with wire basket slide-out) and overhead lockers (three). The rest of the catering appliances are behind the dinette.

Lighting in the kitchen comes from several overhead halogen lights plus a benchtop downlight and rangehood light. A double powerpoint is fitted to the front end of the bench.

One of the benefits of having the bed in the slide-out is a happy combination of an island double bed and good walk-around space. Both sides of the bed have full-height but narrow cabinets fitted with wardrobes, drawers and cupboards. There are no bedside shelves; instead, Jayco has cleverly put inserts into the bottom of the wardrobe area – a very neat idea.

The slide-out has made room for the narrow cabinet around the window on the opposite wall. Under the window area are six cupboards and two shelves. Up one side of the window is a recessed mirror while the other side (nearest the kitchen bench) houses the mounting point for the flatscreen TV, AM/FM radio/DVD player and controller for the automatic satellite dish. Press a button and the roof-mounted satellite dish does the rest.

With concertina doors for privacy, the rear bathroom has the full fitout – classy circular door shower in the nearside corner, vanity cabinet in the middle and Thetford cassette toilet on the offside.

Slide-outs come in many different sizes and layouts, but in this particular setup, Jayco has expanded the bedroom area to allow a longer bed with good access to the rear bathroom. That’s a very good thing and adds considerably to one’s enjoyment of the motorhome experience. – Malcolm Street.

Read the full review in the February issue of Caravan World, on sale now!