Owning a motorhome and having a full time job can mean that your beautiful RV spends more time parked than used. However, one of the ways of enjoying the motorhome lifestyle without owning one is by making use of one of the many hire companies around. This makes good sense particularly in Australia where distances are long– with minimal holiday time, you might not wish to spend a week getting to the other side of the country. Fly/drive holidays in this case make excellent sense.

That’s exactly what I did when travelling to the recent Campervan and Motorhome Club of Australia (CMCA) rally in Tas. Time was an issue so it was a matter of flying to Hobart and picking up my six-berth Apollo Euro Deluxe motorhome. I was actually travelling by myself, but there’s no point slumming it.

Apollo has hire depots throughout Australia (not only capital cities), as well as New Zealand, Canada and the US. The Hobart Apollo depot is next to the airport hotel, which itself is less than 1km from the airport, so pickup is not difficult. The Apollo team had everything washed and cleaned for me so after doing the paperwork and familiarisation, it was time to hit the road in the Euro Deluxe (which is available for private purchase as the Kepple– see page 89). One of the little treats on this trip was an early morning drive across the Tasman Bridge and along the Derwent River. A windless morning and clear day resulted in some stunning riverside reflections. 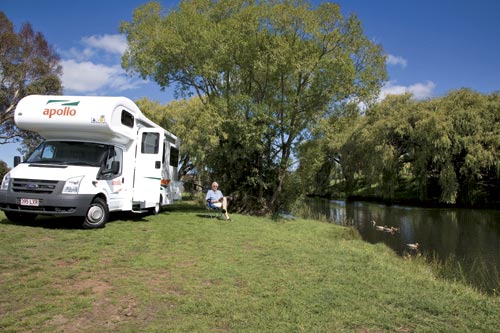 My Euro Deluxe was built at the Apollo/Talvor factory in Brisbane. It was based on a Ford Transit cab chassis with the tried and trusted 2.4L turbodiesel driving through a six-speed manual gearbox. Most hire companies seem to prefer manual gearboxes as opposed to the AMT/auto variety (which many drivers prefer), but the manuals are slick and sure to use. I wondered how the Transit would cope with the hills and dales of Tas, but it didn’t have any problems.

Apart from all the usual driving controls and features, which are close to hand, one of the Transit cab’s assets are large storage pockets above the dashboard, both in the centre and in front of the driver. A derivative of its commercial background, they are also ideal for maps, the GPS, iPods and the like– the driver’s storage even has a 12V socket. Sadly, the Transit radio does not have a 3.5mm socket for the iPod, so it was out with the FM transmitter unit.

With a C class motorhome, it’s a bit hard to get away from the Luton peak look, but the Euro Deluxe manages a reasonably streamlined appearance from the front and side. It comes fitted with a Fiamma F45 awning, a Hehr-style (non security) door and Hehr louvre windows. I appreciated the latter especially on the day and night when it rained despite the warm temperature. Not all hire motorhomes have external bins or at least good-sized ones, but my Euro Deluxe had a tunnel boot across the rear. It was large enough to contain camping chairs, a fold-up table, hose, dustpan and brush and a small washing line and pegs.

This might seem obvious but there are differences between motorhomes built more for the rental market than the private one– something that not everyone appreciates. One of the more obvious differences is that most rental rigs will not have a fixed double bed in the rear section– the only likely fixed bed will be above the driver’s cab. As was the case with my Euro Deluxe, being a six berth, there was the Luton peak bed (with a head height of 710mm), a dinette behind the driver’s seat and a club lounge in the rear. Both lounges and dinette can be folded down into beds. An important point: the lounges directly behind the cab have four seatbelts fitted, so there’s a seat for each person who could potentially sleep in the motorhome.

Located mid-offside was the bathroom cubicle, while the kitchen bench occupied the nearside wall.

Being a hire vehicle, all the necessary linen, towels, cooking and eating utensils were supplied. About the only thing missing was a coffee plunger– the coffee stall at the CMCA rally had me as a regular visitor.

I see the lack of a fixed rear bed as an advantage: it makes way for the club lounge which, thanks to the surrounding windows, has a great view of the surrounding countryside. This lounge came with an any-which-way Lagun swivel table. The overhead lockers provide a generous amount of storage space.

A feature of the Euro Deluxe is the good-sized kitchen bench that comes fitted with a three-burner cooktop and stainless steel sink combo. The latter didn’t have a drainer, so I made do with a tea towel. The 12V compressor 110L Waeco fridge is under the bench and it was pleasing to note that the microwave was set at eye height, rather than level with the overhead lockers.

Benchtop area was excellent, as was the cupboard, drawer and overhead locker space. The lockers did have one disadvantage, though: the doors are side-hinged, and I banged my head a couple of times– I’m a slow learner. The bench-end wardrobe– not overly large but easy to access– was handy.

At the forward end of the bench, the permanently mounted flatscreen TV could be seen from the front dinette seats, but not from anywhere else. There wasn’t a radio but the cab AM/FM/CD player radio could be turned on for an hour at a time without the ignition key.

Slightly larger than some I have seen, the bathroom had the usual flex-hose shower, Thetford bench cassette and a fold-down washbasin with shaving cabinet above. It’s an arrangement that works quite well.

Electrics were quite simple with plenty of 12V fluorescent light fittings, but another 240V powerpoint or two would have been useful. With the 12V fridge, there wasn’t a solar panel to charge the house batteries, so extended unpowered stays are going to be limited. Not that that is such a problem for most travellers...

Did I enjoy my travels in my Apollo Euro Deluxe? The short answer is yes! At 7.3m (23ft 11in) long and 2.3m (7ft 7in) wide (width being the most important dimension for many people), it’s not a difficult vehicle to drive and makes for an excellent touring and accommodation vehicle. For me, it worked well as a spacious mobile office while I was ‘working’ at the CMCA rally.