As far as Paradise motorhomes go, the Oasis range is a little different. Not because it doesn't have many of the usual Paradise features but because it is a van-based conversion using a Mercedes Benz Sprinter 316 CDI van. Most vehicles in the Paradise range are coach-built cab chassis rigs.

There are several models of Oasis motorhomes and the Oasis Deluxe, which I reviewed, comes with a small slide-out on the offside which is in keeping with the Paradise modus operandi. 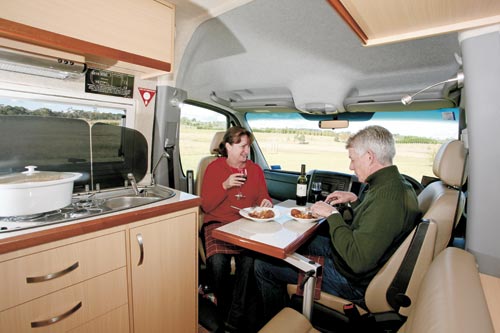 While most large van conversions have a clunky sliding door, a standout feature of most vehicles in the Oasis range is the standard motorhome door that has been installed. The door is optional on some models but standard on the Deluxe and, instead of fitting into the original sliding door gap, the new motorhome door is fitted directly behind it, creating more versatility with the internal layout. It does change the profile of the van a bit, though, because from the rear, the door appears to stand out from the van side. But this is an illusion, predominantly caused by the curve of the van's body.

Behind the door, the window is smaller than usual, which means that both the window and the door can be fully open at the same time. Along the top nearside edge, the curved Fiamma awning keeps a low profile as does the nearside LED strip light, which provides good illumination.

Many large van conversions have no external storage bins apart from those dedicated to toilet cassettes and gas cylinders. But one of the surprises in the Oasis is the number of external storage bins available. This is especially important because the area that would normally be used - behind the rear doors - isn't available. There are two bins along the offside, one for the two 4kg gas cylinders, the other for an optional 2kVA generator. That bin is acoustically ventilated for the generator but can also be used for other things if a generator is not fitted. Our review vehicle also had an optional nearside bin - a very handy addition.

If, like me, you're used to sliding-door vans, it's slightly disconcerting to step into the middle.

While lots of conversions utilise rear opening doors, the rear doors of the Oasis are blocked off by the full-width rear bathroom. Forward of the bathroom, the east-west bed has its head in the offside slide-out. That leaves room for a nearside kitchen and a lounge/dining area - a combination of the swivelled-cab seats and offside sideways-facing lounge.

Although the interior space is limited, a large window and the rear slide-out add to the perception of space. The décor is light and deceptively simple, which also helps in this regard.

Fitting a full-width bathroom into the rear of a Mercedes Benz Sprinter is a bit of a challenge but it has been achieved by the Paradise team. There is an offside shower cubicle, mid-station Thetford cassette toilet and a small corner washbasin. The latter sits in front of a small cabinet with a wardrobe, overhead lockers and shelves. There is also a Paradise-designed odour extraction system for the cassette toilet, which seems to work quite well. Other features of note are the mirror along the high-side of the rear wall and the hinged shelf above the loo.

The island double bed, which fits neatly into the slide-out, has small bedside shelves on either side as well as gooseneck reading lights. Taller-than-average people are going to appreciate the 150mm bed extension that's available, and a custom bed length can also be accommodated. But both, naturally, cut down on the amount of space available to walk around the bed.

When the slide-out is closed, it looks like the bed blocks the walkway to the bathroom, but the bed base has been designed to lift easily in order to allow passing traffic. There is a substantial storage space under the bed, too, with room to carry just about everything an RV traveller might need.

The flatscreen TV is mounted on the nearside wall between the door and rear window in such a way that it can be seen from the bed or the seats at the front. And the Paradise-designed swivel mount means the TV can be left in position when driving. The 12V and antenna connections, 240V powerpoint and a bank of light switches are all located underneath the TV.

In a rig the size of the Oasis, it's important to use every bit of space; therefore, Paradise has used swivelling cab seats, which suit the lounge. There is also a Lagun swivel-mounted table. When it's not being used, the table can be stored behind the seat back and the Lagun swivel under the seat, along with an external tripod mount as well.

An advantage of not using a sliding door is that the kitchen bench does not protrude into the doorway. The compact kitchen bench takes up all the space where the doorway used to be. There is a stainless steel three-burner cooktop and sink combo in the kitchen with two multi-shelved cupboards and three drawers underneath. Above the kitchen bench, the locker offers plenty of storage space.

Located between the lounge and the slide-out, a Sharp Carousel microwave sits atop a Waeco 150L fridge. With the fridge sitting at floor level, the microwave is a very user-friendly height. This setup leaves space for a full-sized overhead locker that's partly occupied by 12V and 240V electrical control panels.

Taking to the road in the Oasis reveals a very smooth performer and the 2.2L 120kW turbodiesel, five-speed full-auto gearbox slid through the gears effortlessly. Those who prefer a little more response under the right foot could opt for the more powerful 3L 140kW V6 but our 120kW Sprinter seemed responsive enough.

Our test drive took us through the Gold Coast hinterland where there is plenty of undulating terrain for properly testing a vehicle's engine performance.

Having a standard motorhome door gives more flexibility with the layout and the slide-out adds a considerable space in the bedroom.

Designed for couples who prefer a small rig or singles who favour compact self-contained touring, the Paradise Oasis is a good-sized vehicle for both open-road touring and manoeuvring through city streets.

• Excellent use of cab area

• Less of a fiddle to get table and seating right

• Easier access to battery and charger (under the bed)