SLIDE-OUTS ARE AN excellent feature for adding to the living space of RVs. They are an option for many manufacturers, but for Paradise Motor Homes, they are often the basis for layout design - a feature that has become the manufacturer's hallmark.
While a slide-out is a very obvious characteristic, there are plenty of other engineering components that are not so easily observed. Items like the widened Mercedes-Benz cab (a cut-and-shut process done in the Paradise factory), lightweight body construction required to support the slide-outs, auto-locking drawers, and even the vapour extraction system used on the cassette toilet.
All this and more is built-into one of the latest Paradise designs, the Inspiration Ultra.

INSPIRING DESIGN
Based on a Mercedes Benz Sprinter 519CDI, the Inspiration Ultra has not one, but two, slide-outs. The offside space measures 4.2m (13ft 9in), while the nearside unit comes in at 3.5m (11ft 6in). I know it's an obvious thing to say, but having two slide-outs, both around 600mm (2ft) wide, really does add an incredible amount of space.
One of the benefits of this design is that while it has the interior space of something like a 12m (39ft 4in) A class motorhome, this 7m (22ft 12in) rig is considerably easier to drive, manoeuvre and park. This is especially true in this case because the Sprinter comes with a 3L, 140kW turbodiesel engine that comfortably drives through the five-speed auto gearbox, making it a very smooth performer.
Of course, it also comes with all the usual Benz safety features like ABS brakes, and driver and passenger airbags. One feature I like is the in-built GPS that includes an entertainment system and reversing camera.
It should be noted that the Sprinter 519CDI comes with a 5000kg GVM, which gives extra load capacity, but also requires a Light Rigid truck licence. Don't let that put you off, though.
One downside to the twin slide-out design (if there is one) is that, when viewed from behind, the Ultra tends to have a somewhat boxy look. However, that is offset by the impressive two-tone paint job.
One of the weaknesses in some motorhome designs is the lack of external bin space. Not so in the Ultra, which has a considerable amount, all with swing-away doors sealed against dust intrusion. But some of the lower spaces, like those under the slide-outs, will require consideration for some, especially if bending over is a problem.

SETTING UP
After parking, setting up the Ultra requires minimal time and effort. The process involves operating two switches to open the slide-outs, spinning the driver and passenger seats around and opening the windows.
Inside, space is the operative word. Like many Paradise motorhomes, the front swivelled seats work in conjunction with a fold-out table, and third matching seat, to make the dinette.
Add in the sideways lounge in the front of the offside slide-out, and a roomy srea in which to relax is created.
Split between the slide-outs, the main kitchen bench is on the offside and the fridge and pantry are fitted into the forward section of the nearside slide-out. That leaves space in the mid-rear for the bedroom, with the expanded full-width bathroom across the rear.
While much of the Paradise engineering is in the hands of owner Colin MacLean and his sons, he wisely leaves a lot of the internal design and decor to his wife, Libby. And it shows. A very cool and airy interior is the result of light hues and tones and plenty of window space. There are recessed and reading LEDs in all the right places.
In the bathroom, the vanity is included in the nearside slide-out, which leaves space for the shower cubicle opposite, with the cassette toilet sitting on its own in the middle.
Not only does the vanity include the usual items like washbasin, lower cupboard and mirrored shaving cabinet, but also a top-loading washing machine. Interestingly, rather than having a lid to hide it, the washer is built into a special compartment that hinges out when being used.
Windows and a fan hatch provide bathroom ventilation, as does the toilet cassette ventilation system.
A sliding door with a mirrored finish closes off the bathroom. Part of the bathroom wall doubles as a mounting point for the 32in flatscreen TV, which can be seen easily from both the bed and the front lounge.
KITCHEN AND BEDROOM
General storage in the bedroom is generous, with the east-west queen bed set in the offside slide-out, surrounded by overhead lockers and small bedside cabinets. The opposite side has a huge wardrobe set into the slide-out. This comes with his and hers hanging space and shelves, plus two large wire baskets and more shelves. Overloading with gear might become a temptation here!
Taking up the rest of the nearside slide-out is a 184L three-way Dometic fridge with a Sharp microwave above. Appearing slightly at odds with rest of the motorhome, the kitchen bench appears quite small, but that's a bit deceptive. In addition to a four-burner cooktop/grill and stainless steel sink (no drainer), it does have a considerable amount of drawer space, plus the sizable slide-out pantry.
Benchtop space isn't great, but can be added to by the fold-out benchtop that hides behind the adjacent lounge. That, like the splash panel beside the sink that keeps water off the bed, is a really neat idea.
On the opposite side, the dining table can be folded in or out as needed. Very versatile, it can be used for dining, working on the laptop or having a glass of wine. In fact, wine glass and bottle holders are kept in the storage compartment under the table.
Much of the technological sophistication of the Ultra is hidden behind the panels, but 200Ah deep-cycle batteries, backed up by a 30A smart charger and a 2.3kVA generator deliver the 12V electrical load. A 1000W sine wave inverter is standard, but solar panels are an option.
Several 240V powerpoints are fitted in all the appropriate places and protected by an earth leakage circuit breaker. Two roof-mounted Dometic air-conditioners keep things cool, while on colder winter nights the gas-driven ducted heating system can be fired up. 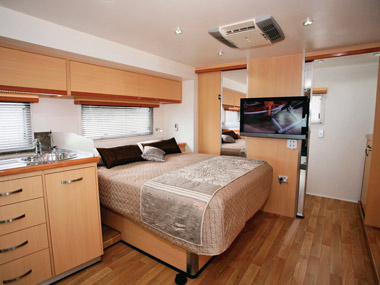 THE BOTTOM LINE
It has to be said that a Paradise Inspiration Ultra motorhome is not particularly cheap, but it is a very sophisticated and well-engineered unit.
Talking to Colin before purchase is mandatory to get a full and clear picture - he's happy to answer all questions, in great detail if needed.
If you are looking for a motorhome with a very spacious and comfortable interior, which is still at an easily-driveable length, the Paraside Inspiration may be the rig for you.