Gold Coast manufacturer Paradise is well known for its slide-out motorhomes. I say that because, while most motorhome manufacturers offer some slide-out models, nearly all Paradise models have one. Apart from anything else, slide-outs add a considerable amount of living space to the motorhome without increasing the external on-road size.

Our review motorhome, the Integrity Supreme, comes with a single slide-out which adds about 1.8 m3 of extra space to a motorhome that is less than 8m in length.

Based on a Mercedes Benz Sprinter 519CDI, the Integrity Supreme comes with a 3L, 140kW turbodiesel engine that drives through the full auto seven-speed gearbox, making it a very smooth performer. It comes with all the usual Benz safety features, such as ABS brakes and driver and passenger airbags. The 3L turbodiesel is the most expensive in the Sprinter range but it makes life very easy on the road, with plenty of power under the right foot. I always think that a larger engine working easily is a much better drive (and more economical) than a less powerful one working at the top of its range. 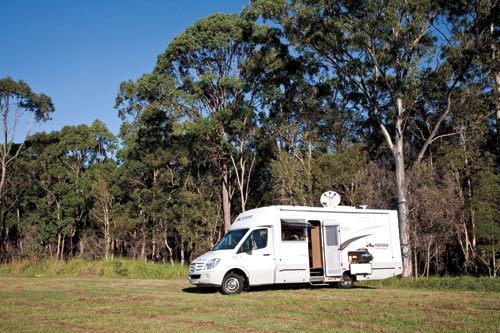 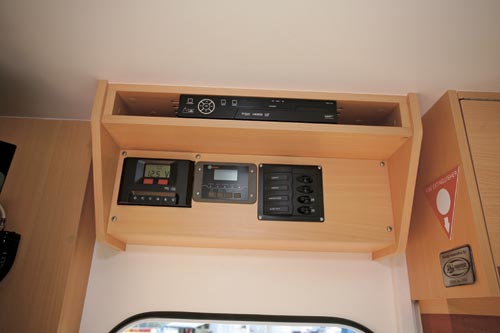 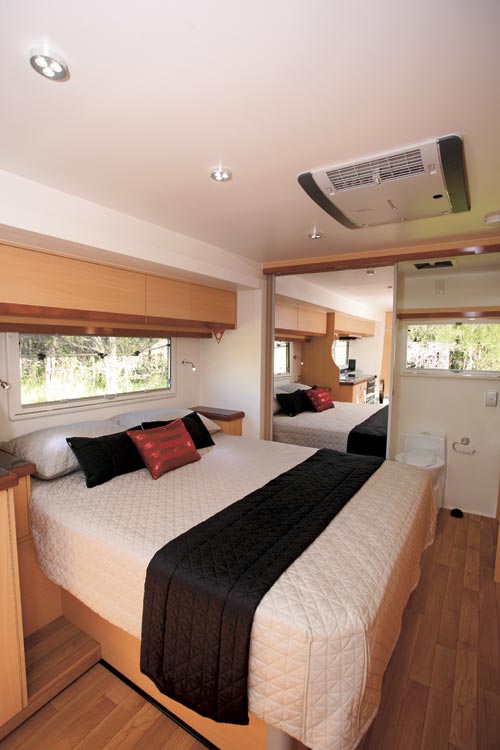 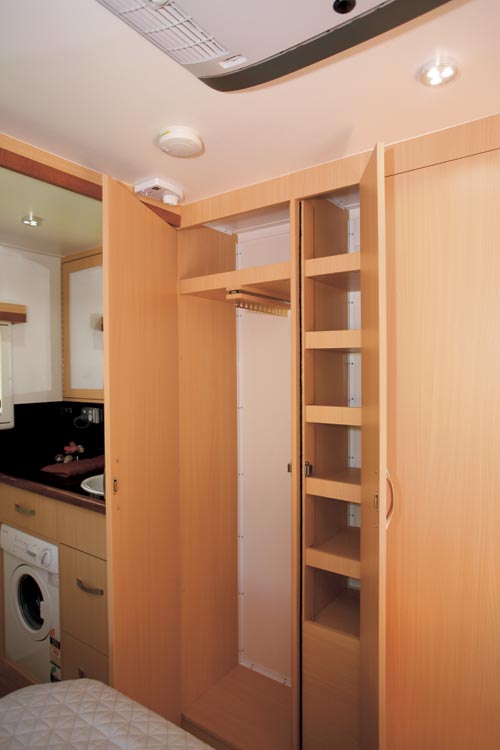 This particular Sprinter-based Integrity Supreme comes with a 5000kg GVM which gives a welcome extra load capacity but you’ll also require a light rigid truck licence to drive it. Don’t let that put you off, though! The motorhome is also available with a GVM of 4490kg (suitable for standard car licence)
and the less powerful 2.2L turbodiesel. As an alternative, an Iveco Daily 50C17 cab chassis is also available – the standard chassis – and the Benz is available in its different forms as an option.

Anyone who has been to the Paradise factory will know that a meeting with proprietor Colin Maclean or his team requires the brain to be fully in gear.

There are several reasons for this – not only because of the feature-packed Paradise range but also because the team are always keen to point out the items that can’t be seen – and there are quite a few of those. There are the big things like the composite body panels built with a high tensile alloy rollover frame, slide-outs that are integrated into the body structure, and the crash test simulation for the body construction, cabinetry and appliance anchoring. Or the little things, like the cabinetry, which has dovetailed interlocking construction, as well as the patented automatic locking cabinets, which use electro-magnets, and the optimised weight distribution which spreads the load evenly over the axles and keeps heavy loads low.

As I mentioned previously, the Integrity Supreme’s body has composite fibreglass walls built to Paradise’s specification. Both the roof and floor are one-piece items, making them strong and waterproof.

A downside to its slide-out design (if there is one) is that, viewed from the rear, the Integrity Supreme looks a bit boxy, but it is offset, to a great degree, by the two-pack, two-tone paint job.

The Integrity Supreme does not have a problem with external storage bins – there are a considerable amount, all with swing-away doors and fully sealed against dust intrusion. Some, under the offside slide-out, require a bit of thought about how to use them, though, and are certainly easier to get at with the slide-out closed. All have internal lights for night-time use.

After parking, setting up the motorhome takes little time. Basically, it involves flicking a switch to open the slide-out (after remembering to turn on the master switch), spinning the driver and passenger seats around, and opening the windows. The slide-out operation is not particularly fast but it’s very smooth and quiet.

One of the great features is that all the essential electrical controls are either right by the entry door or directly above, so they’re all very handy. Outside, the mid-nearside bin contains both a slide-out barbecue and a flatscreen TV. The latter is mounted on a Paradise swivelling arm, which is strongly built and operates very smoothly.

Like many of the construction features, much of the technological sophistication of the Integrity Supreme is hidden behind the panels. The two 100Ah deep-cycle batteries are backed up by a 30A smartcharger and two 150W solar panels. On this model, a 2.3kVA generator is an option. Powerpoints (240V) are fitted in all the appropriate places and are protected by an earth leakage circuit breaker. A roof-mounted Truma Aventa air-conditioner keeps things cool and, if you like cooler climate travel, then the Eberspacher diesel-powered ducted heating system can be fired up.

Many Paradise layouts are similar to each other – the difference is how the slide-outs are utilised. In this case, the offside slide-out comes with a sideways lounge in the front third, kitchen bench in the middle and an east-west bed in the rear. Both cab seats swivel around and, in conjunction with the seat/table directly behind the passenger seat, form an effective lounge/dining area. This setup is forward of the entry door, while the essential 175L fridge, plus a good range of full-height cupboard space, is towards the rear nearside. That leaves the remaining area across the rear for the bathroom.

The Paradise décor is done with a deceptively simple style that creates a pleasant ambience. Large windows supply ventilation and natural light by day.

Two impressive features of the Paradise cabinetry are the handle-less overhead locker doors, which open very easily and lock securely, and the below-bench drawers, which run smoothly and have a self-locking feature.

Up front, the lounge and dining areas mesh well together. While that might sound like an obvious statement, I’ve seen one or two motorhome slide-outs that don’t work in a cohesive manner with the swivelled cab seats.

A side benefit of having the fridge by the door is that the top can be used as a mounting point for a flatscreen TV. The internal and external TVs are satellite connected.

The nearside seats have a fold-up table between them, which offers practical dining for two people and, if additional guests turn up, there is also a free-standing table stored under the bed. But if all the tables are put away, the seating arrangement offers comfortable lounging room for four or five people. The cabinet space beside the rear passenger seat not only offers bench space for drinks and nibblies, but also wine bottle storage underneath.

Catering is easy with the facilities on offer. The kitchen bench has a four-burner cooktop/grill alongside a stainless sink with drainer and a convection microwave underneath. There are no storage cupboards as such but, instead, two large overhead lockers, five drawers and a wire basket slide-out pantry provide a very efficient way of stashing all your kitchen items.

Although there isn’t a great deal of benchtop space, an option (as fitted here) is to have an extension piece that simply lifts out over the sideways-facing lounge. But, of course, the lounge can’t be used while the extension is in use.

If there’s one thing there isn’t a shortage of in the bedroom, it is storage. There is a good selection of hanging space and shelves – more than enough for two people with room left over. That doesn’t even include the bedside cabinets and overhead lockers above the bed. With the slide-out open, there’s plenty of walk-around space in the bedroom, but that is reduced considerably with the slide-out closed.

But the bed can be lifted easily, and I do mean easily, for that purpose. Lifting beds can be heavy work but someone at Paradise has been playing with the bed lift so that it can be lifted without effort by the mattress alone.

A look in the bathroom reveals a large shower cubicle in the offside corner and, in a reversal of the norm, the cassette toilet has centre stage, leaving space for the good-sized vanity cabinet in the nearside corner. It includes a washbasin and also a large shaving cabinet above and drawers below. One of the options fitted to this model is a front-loading washing machine that fits neatly under the benchtop.

There really aren’t enough pages here to fully review this Paradise Integrity Supreme motorhome. It’s packed with features, many that can be seen and some that aren’t as obvious. But they are appreciated, nonetheless, because, in some cases they are essential but expensive. You get plenty of bang for your buck and there’s no doubt about how much space the slide-out adds without increasing the external driving size.

·Internal layout, particularly the front of the motorhome

·Generous storage inside and out

· The keys for a bit longer, at least six months!