Avida Motorhomes, Australia’s largest motorhome manufacturer, makes a wide range of RVs. Everything from the Ducato van-based Escape to the luxury A-class Classic on a Spartan chassis rolls out the door of the company’s factory in Emu Plains, NSW.

Sorry? You’ve never heard of Avida so how can it be Australia’s largest manufacturer? Well, the name is the result of a 2012 federal court ruling requiring that Winnebago Australia – distinct from the American company of the same name, which has nothing to do with the Aussie firm – rebrand itself.

In the middle of the Avida range are the Iveco Daily-based Esperance motorhomes, which have a considerable number of layouts available – most with slide-outs and at least one wheelchair-friendly rig. 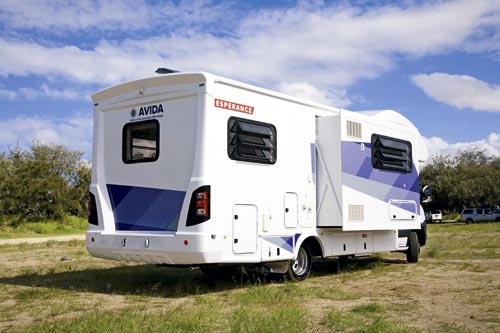 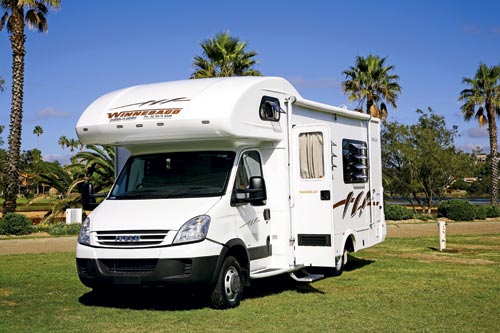 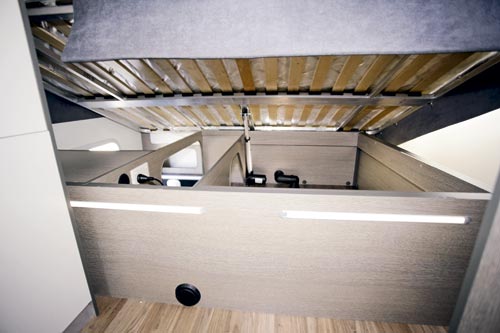 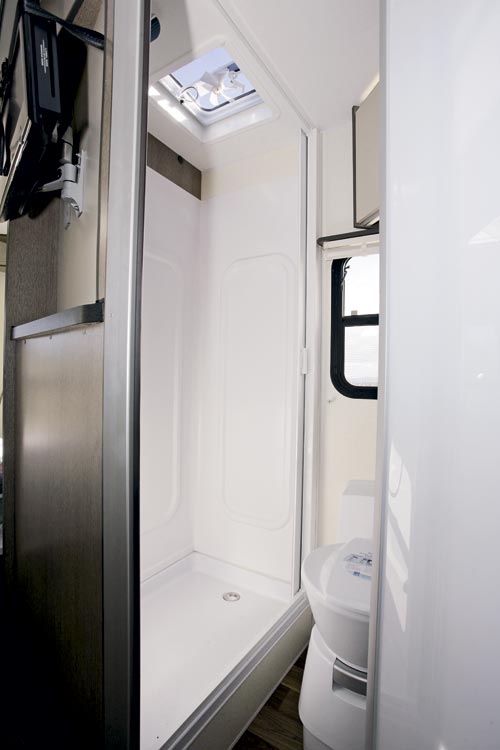 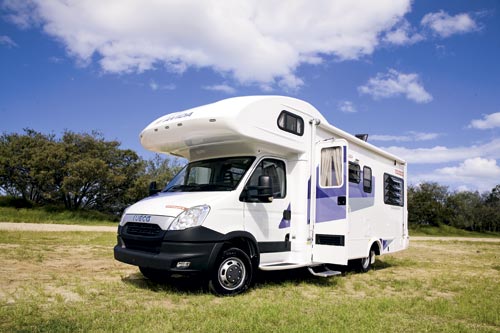 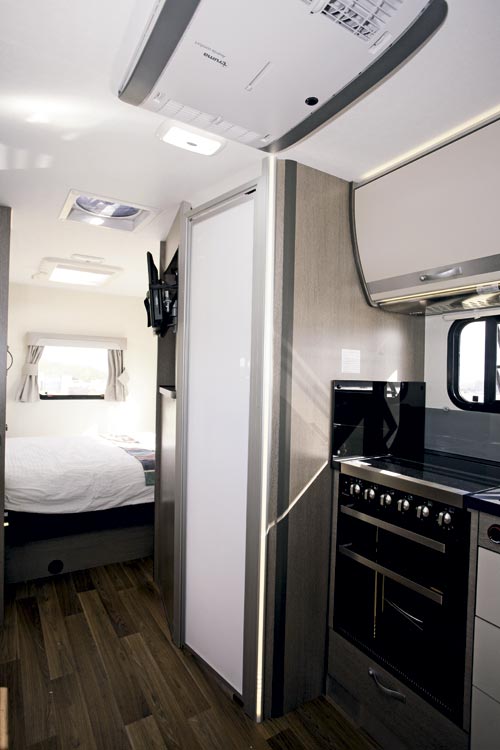 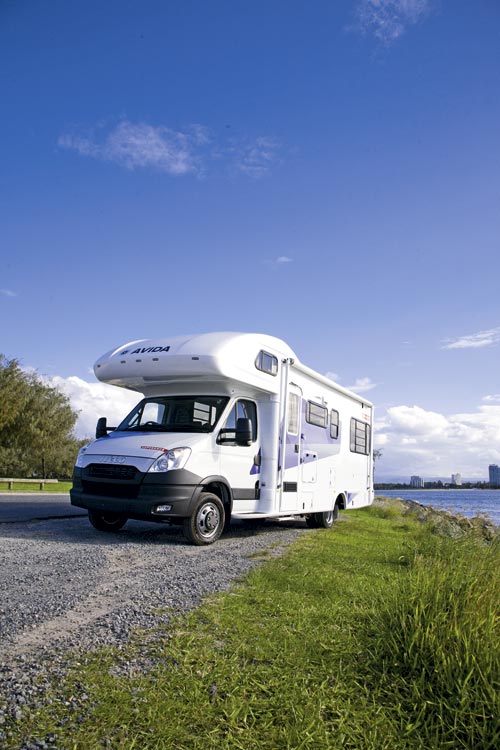 Avida took the opportunity of the name change to update the Esperance range. That was all good and well, but we couldn’t get our hands on one to test – they were all on the Australian RV show circuit! Then we heard a rumour that one was to be briefly in captivity at the new Avida Gold Coast dealership of Hinterland Motorhomes. It was a C7994SL model – ‘C’ being a C-class rig with Luton peak; 79 referring to a length of 7.9m (26ft); SL meaning a slide out; and the 94 designating this model.

The Esperance is based on the 50C17 Daily, which comes with a 3L 125kW/400Nm turbodiesel engine. It’s actually an updated model but, in keeping with most light commercial vehicle manufacturers, there are only a few obvious clues, one being the six-speed Agile (Iveco speak for automated manual) gearbox which, compared to previous models, is more precise, especially in the lower ranges. Another difference, oddly enough, is with the radio/CD player – light commercial vehicles often have only a basic unit, but things here are looking up.

On the road, the Esperance rolled along readily enough without any dramas. I suspect the driver’s seat needs some adjustment. Being a swivel seat, it has to be locked into the forward position for driving, which it certainly was (I checked carefully), but I still had the slight impression that it wasn’t.

Like most Avida motorhomes, the Esperance employs a fully-welded metal frame for the walls, floor and roof. That frame has a foam sheet filler, which Avida reckons acts as both an insulant and to reduce road noise. For the walls, it’s all laminated together with backing panels and an outer fibreglass skin. The floor panel has a ply timber sheet above and metal sheeting below to provide underfloor protection. Additionally, the Luton peak/cab surrounds and rear wall are fully-moulded fibreglass.

In keeping with Avida’s normal method, EPDM rubber (a synthetic known for its heat, weather and ozone resistance and more) is used as the outer covering of the roof.

Built into the offside wall, behind the driver’s cab, is the slide-out. It’s in the same position on all Esperance models, which means the body engineering is similar across the range.

Avida has stuck with the usual Hehr doors and windows. The windows are glass multi-louvre, except for those in the bathroom and Luton, which are sliders. To this writer they look a bit dated, but a distinct advantage of the Hehr windows is that they’re made of glass, which scratches less easily than acrylic and they don’t stick out as far when open as full-size hopper windows do.

There are a variety of external bins around the Esperance. None are particularly large but, in my experience, smaller bins tend to keep stored items more secure. There’s the usual battery compartment by the entry door – the batteries are bolted in, rather than on a slide-out tray – and, directly opposite, you’ll find the gas bin with two 4kg cylinders. These, along with the adjoining bin, are a bit awkward to access when the slide-out is open.

Directly behind the slide-out is a bin with a slide-out tray for easy access to a generator. Not for storage but entertainment, the narrow compartment by the door contains a flatscreen TV mount, speakers and powerpoint, as well as acting as a picnic table.

Setting up the Esperance takes minimal time. Once level, it’s a matter of opening the slide-out and swivelling the driver’s cab seats. One of the slightly annoying features of an Iveco cab is that the pedestal-mounted hand brake restricts the driver’s seat from being fully swivelled.

With the entry door right behind the cab, the internal layout is quite simple. Directly opposite the door, the slide-out contains the L-shaped dinette and the 150L fridge with microwave above. The rest of the kitchen bench flows along the mid-nearside, leaving room for a split bathroom in front of the bedroom. Up front is a Luton bed that can be lifted up out of the way if not required, making getting to and from the cab seats so much easier.

The cabinetry is an interesting mix of curved European and square American. The Avida’s new colour scheme has a slightly retro look about it, in my opinion, and carries the interesting name of ‘Musk Granita’. All the new colour schemes (see website) seem to have beverage-themed names!

In keeping with Avida’s fine pedigree, the 240V and 12V electrics are well set-up. The two 12V batteries are rated at 100Ah each, charged by either the mains unit or the vehicle charger. Solar panels are an option – something to consider if planning remote camping.

LED lights are used throughout, some neatly concealed, but there are also fluorescent and halogen fittings. For keeping cool, a Truma Aventa remote-controlled air-conditioner is fitted in the ceiling.

The L-shaped lounge looks inviting but I found it a tad awkward for two people, especially given the position of the table leg. However, the table has a Zwaardvis multi-position fitting, which makes things more comfortable.

Across the way, the kitchen bench is quite small – there’s just enough room for a full cooktop/grill/oven and a stainless steel sink avec drainer. But there is no shortage of drawers, with four large ones provided, along with two overhead lockers. The front panel of the cabinetry beneath the kitchen bench sports various control switches: Webasto space heater, Truma hot water heater, and slide-out.

Bathrooms that are split across either side of the layout usually have a toilet cubicle on one side and a shower cubicle on the other, but the Esperance’s bucks the trend by positioning both a separate shower cubicle and Dometic cassette toilet on one side, and an open washing-up area on the other. It might sound a bit awkward but, for me at least, it’s an arrangement that worked well. The vanity is nicely laid out, with cupboards above and below and mirror in between.

In the rear of the Esperance, the east-west bed, with its head against the offside wall, measures 1.9x1.4m (6ft 3in x 4ft 7in), allowing for a reasonable amount of walk-around space. Louvre windows offer plenty of crossflow ventilation, while a small cabinet on one side and cubby hole on the other act as bedside shelves. There are two overhead lockers and a narrow wardrobe between the bed, and the aforementioned washing-up area includes hanging space. Also, the slatted timber bed base can be lifted, not by hand but by the push of a button, to provide access to the under-bed storage area. An external bin door at the offside rear does the same.

The Esperance is one of those motorhomes where the best TV mounting position is hard to pick. This one was set on the bathroom wall facing the bed, which meant bedtime TV viewing was quite practical. It did swing out so as to be seen from the front of the motorhome, but getting two seats with comfortable viewing angles is going to be… interesting. I’d consider a second mounting point up front.

With its Esperance range, Avida has provided a standard layout that comes in either a B or C-class motorhome with layout alternatives (mostly to do with the bedroom) available. That’s not a bad strategy, as it means all the basic engineering stays the same.

There is also a layout sans slide-out, but there’s no doubting the increased interior space gained by specifying the slide-out variant.

With its length of close to 8m (26ft), the Esperance offers plenty for people in the market for a new, mid-sized motorhome. In the weight department, the 50C17 Daily has a GVM of 4495kg, which given the Tare of 3914kg, translates to a loaded capacity of well over 500kg. However, if anything greater is needed, the chassis can be upgraded to a GVM of 5200kg, putting the vehicle into Light Rigid truck licence territory.

WHAT'S IN A NAME?

A great deal, if your name used to be Winnebago (Australia). 2012 was not a great year for Australia’s largest motorhome manufacturer in terms of the name it carried for decades.

When Winnebago US won its court case, the Australian company had to take the necessary decision to adopt a new name and market a whole new identity. Despite the branding change, the motorhomes won’t be any different in the short term, apart from the usual upgrades and refinements, as well as the prospect of new models to come.

The rebrand took effect in February, in time for the Adelaide caravan show, and Avida has since reported high levels of support from its dealers and previous customers.

“We are happy that the response to the Avida name has been very positive and it’s been well received from both existing and new customers,” Avida’s Max Mayo told CW. “Additionally, our new look inside and out has been a positive step forward for us. As a footnote: our appeal against the original judgement over the use of the Winnebago Australia name has been heard and we are now awaiting the outcome.”