As an RV journalist, my work trips can be hectic and they are often done in a short period of time, so a small motorhome is ideal because it provides transport, accommodation and a mobile office all in one.

Not long ago, I had to spend a few days in Ballina on the north-coast of NSW, so I borrowed a Star RV Aquila motorhome in Brisbane. Star RV is not a new company; it's the recently-established upmarket arm of Apollo Motorhomes. Apollo has rental depots throughout Australia, New Zealand and the USA, but Star RV motorhomes are only available in Sydney, Brisbane and Cairns. 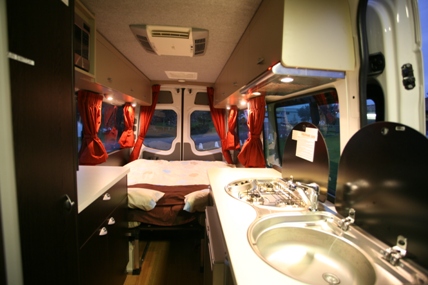 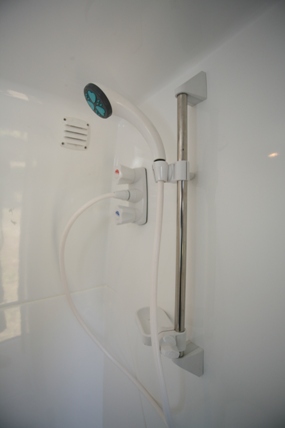 My Aquila was based on a VW Crafter van conversion. At 7.1m (23ft 4in) long, the Crafter is an excellent length for either a small motorhome or a large campervan. It has a 100kW turbodiesel motor, which is the same size motor fitted to much larger vehicles, so there is plenty of grunt in the very torquey (330Nm) engine. The six-speed automated gearbox - a derivative of the earlier Mercedes Benz Sprintshift - has improved over time but it still has a bit of hesitation during quick gear changes.

The original VW windows have been retained and tinted, creating a good perception of space while giving only the slightest impression of being in a fish bowl. The downside is that only two of the windows can be opened - the front offside window and the sliding door - which leaves the rear a bit under-ventilated in hot weather. But you could open the rear doors to alleviate this. The motorhome has no awning and the exterior attachments include the offside Truma water heater, gas bin for a 4.5kg gas cylinder and the Thetford toilet cassette.

Inside, two sideways-facing lounges, with a Lagun-mounted swivel table in between, make up the dining/lounging/sleeping area. There is a kitchen bench on the nearside with a second bench directly opposite. That leaves the space behind the driver's seat for a small bathroom and a small wardrobe. Neither of the cab seats swivel around.

The lower cabinetry is chocolate brown in colour, which might sound a bit dark, but it is offset by the beige overhead lockers and the generous windows.

One of the advantages of a van of this length is that sideways-facing lounges can be used. They not only create plenty of seating but they make up a bed measuring 1.93x1.73m (6ft 4in x 5ft 8in). The lounges can also be used as single beds but they would be quite narrow. The under-lounge storage space has an open aluminium frame, so large items such as camp chairs, suitcases and a fixed safe could be stored easily but smaller items could not. Overhead lockers run along both sides of the van, including above the kitchen benches, providing storage space for other things.

Old hands will tell you that it's best to use soft travel bags rather than those with hard-shells when travelling in a rental motorhome, particularly on a fly/drive holiday. The soft ones are much easier to pack away, especially in smaller campers.

The split kitchen creates some versatility and allows for more bench space and extra storage capacity. The nearside bench has a Smev combo three-burner cooktop, stainless steel sink, and a 12V Waeco 110L fridge. From a washing up point of view, I think the sink/cooktop combo would be better located at the rear end of the bench. The van has a 12V compressor fridge which, in a rental vehicle won't be much of an issue, but overnight stops without mains power will be problematic without a solar panel. The two cupboards and one drawer come with saucepans, kettles, toaster and other essentials for rental vehicle life, but a shelf in the forward cupboard wouldn't go astray.

Across the way, there is a large drawer under the bench and a cupboard where the water heater is stored. The upper shelf provides storage for plates, cups and glasses and there is an LG microwave in an overhead locker. A fixed flatscreen TV is mounted to the wall adjoining the wardrobe.

While the lower part of the wardrobe is used for hanging space, the upper section houses all the electrics including the hot water switch and tank gauges. This is quite a neat idea, as they are hidden but easily accessible.

There isn't a great deal of room in the bathroom but there is certainly enough space to sit on the loo or turn around in the variable-height shower. There is no mirror but the mirrored finish on the outside of the bathroom door is a good substitute.

For the most part, the electrics are well-appointed, with 240V powerpoints in all the right places and 12V halogen lighting located under the overhead lockers with the exception of the fluorescent light handily located above the entry door.

Yes, this is a rental vehicle but it's available for private purchase, too, badged as the Talvor Euro. Regardless of its name, this motorhome moves at a lively pace and it's quite maneuverable when it comes to parking and reversing.

There's a bit less space inside than for a coach conversion of the same size, but for a couple who plan to spend much of their time outdoors, that's not really going to be a problem.

• More opening windows in the rear