Tim Van Duyl — 26 June 2018
With the right gear, composure and a plan, you should never stay stuck.

Sand retrievals can be daunting experiences and should be respected especially when on a beach with the threat of an incoming tide but at the same time, with the right gear, composure and a plan, you should never stay stuck.

Fellow tow tester Chris Michel from Sunseeker Caravans, a more than capable and confident driver, was in charge of piloting the Hema Maps 200 series LandCruiser, as the day before his Mazda BT-50’s transmission had failed. We still had a lot to shoot, and test, so Hema offered the use of one of the support vehicles for the last two days of filming. Behind the 200 was his personal Sunseeker Wild Child, a big van on mud-terrain tyres with plenty of clearance. 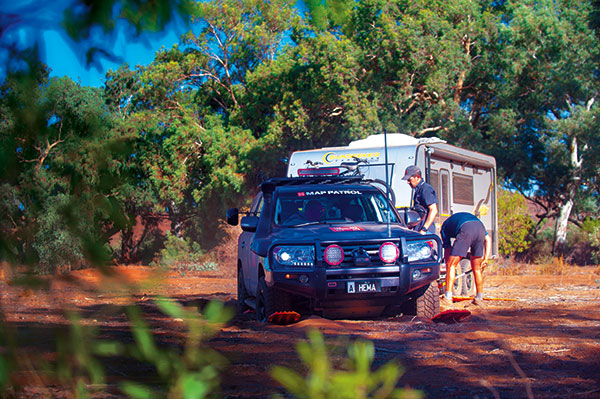 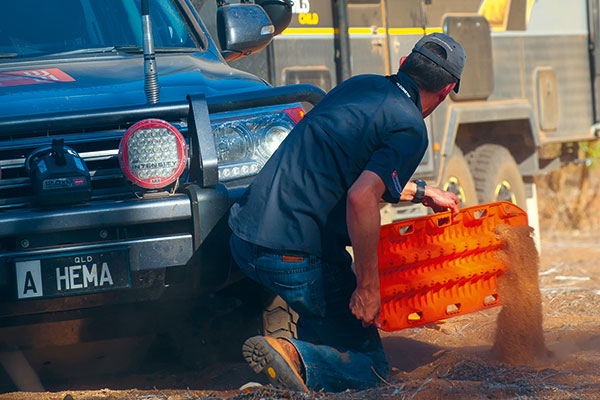 The Hema is well set-up with ARB locking differentials, quality Cooper tyres and a touch more than the standard power thanks to some ECU tuning, but the realities of heavy weights, soft sand and an attempt to turn tightly for the camera meant even the best driver and vehicle combination was doomed to sink.

We were shooting on a dry river bed, in an overgrown area fairly elevated from the base of the bed itself. Underfoot was loose sand with a lot of plant debris and roots. Moving across the sand at constant speeds was fairly straightforward but as it turned out, as soon as some side load was put on the tyres, they quickly dug deep.

Chris did what we all do, and should do, he tried to create momentum by first applying the accelerator then by locking the diffs in an effort to get some traction. He failed, as many of us do and sunk the big 200 down to the running boards.

We didn’t need to call out to him, he has been there before so a quick laugh at the situation and we were into a recovery mode.

The first thing to do is assess the situation and if you are not unlucky enough to be stuck in water, turn the car off. It is quieter, lets the underside start to cool down and gives anyone about to work under it confidence it is not going to attempt to drive off (or over) them. Some people go so far as to have the driver remain in the car and take ownership of the keys and driving, others will force the driver to the grunt work, me, I like to let the most capable and confident work the roles best for them.

If you only have two boards, use them with the front tyres as they will lift the front and, should you need it, you can change the angle of the steering wheel to better place the tyres on the boards.

Do not dig with your bare hands. There could be sharp rocks, roots or even emu nests under the sand. Use a shovel or the Trax and clear as much sand as possible from in front of each tyre.

Once you are happy with your Trax placement, make sure no one is behind the car. I have seen MaxTrax come shooting out from behind a tyre, it is rare but not worth risking your teeth over. Then it is back to driving, hopefully.

The trick is communication and some forceful use of the accelerator. Having a spotter that can tell you about the placement of your front wheels as you try to move is important. In sand especially, MaxTrax can move and you may need to turn the steering wheel to aim the wheels to get best traction.

As you apply throttle, expect the boards to move as they grip with the tyres. The hope and normal expectation is that they are pulled under the tyre allowing the wheels to rise and move forward as they effectively increase your contact patch to the size of each board. Roll off them with constant throttle load, do not slow down immediately, head to your designated spot and park.

I have seen the pressure of the situation make people forget they had them out. Next, have a look under your car checking for damage to brake and fuel lines, power cables and the tyres themselves. Once your Trax are away and you are happy with the situation, relax and head on. Your job is done.