The road unwinds before you, promising an endless array of caravanning adventures as you embark on that long-awaited trip.

In preparation, you’ve ticked all the usual boxes — the car and van are serviced and ready to go, the water tanks and gas cylinders are full, there’s food in the fridge and pantry, you’ve forwarded the mail, stowed the wine, packed the clothes and toothbrush — but there are risks you might not have thought about. 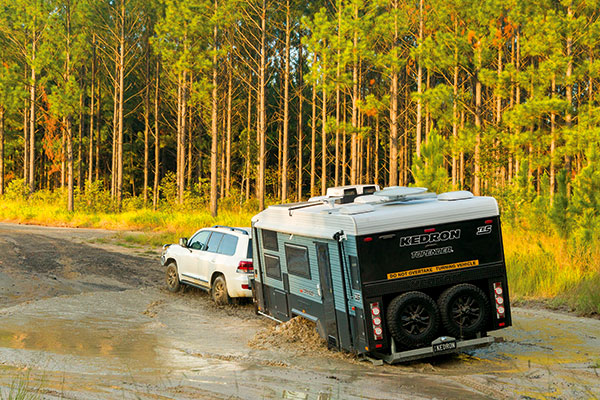 If you use your mobile phone or another electronic device to book accommodation, talk to family or friends, pay the bills, upload travel photos and video or any number of other things on the road, to which you don’t give a second thought in an ever-increasingly connected world, then you could be vulnerable to hacking. Hacking is when someone else on the network accesses your private details, which is especially dangerous when it comes to internet banking.

While travelling with an electronic device or telephone, it can make travelling a lot easier, however, it also carries security risks that you need to consider before you travel.

The best source of cybersecurity advice comes from the Australian Signals Directorate (ASD), which is used by the Australian Security Intelligence Organisation. It is largely aimed at business travellers, but the essence of it is useful for caravanners, also.

Before you hit the road, make sure that your device’s software, operating system and apps are up-to-date and antivirus software has been installed. This also applies to Apple devices — long thought unlikely to be attacked.

As you travel, disable Bluetooth and wireless capabilities and the ability to 'auto-join' a network so your device won’t inadvertently connect to untrusted networks.

Finally, ASD recommends you clear your web browser after each use. This includes deleting the history files, cache, cookies, URL and temporary internet files so nobody else can obtain access to the device. And if you’re coming home from a particularly long trip on which you’ve used public Wi-Fi, all passwords associated with your mobile device should be changed.

With 50 years of off-the-beaten track adventures, the Gall Boys of Kedron Caravans, typically have to keep in contact with family and friends and run their business on the road, despite sometimes being back of beyond.

In response to the ever-increasing cybersecurity problem, Glen Gall says he overcomes this with a few simple steps.

Glen’s biggest tip is for travellers to avoid connecting to public Wi-Fi systems. Instead, Glen reckons it’s worth bumping up your data and connecting a hotspot to your phone.

The idea is simple. If your device, your carrier and your data plan allow it, you can turn your mobile phone into a Wi-Fi hotspot to get your laptop online. But, just because it's a hotspot doesn't mean you don’t need to be cautious. You'll still want to keep data usage down to a minimum, as it’s costly, and the less you use the less likely you are susceptible to a cyber-attack.

The trick, Glen says, is to make sure that your phone and laptop software is fully up-to-date as that helps avoid security risks. Just remember, it will hit your wallet, so keep your usage down.

Expert of cybersecurity Professor Bill Caelli, from Queensland University of Technology, says caravanners are among the most vulnerable of internet users because there are many potential cybersecurity pitfalls to avoid when travelling.

Firstly, travellers should be cautious of using any kind of free Wi-Fi because there’s “nothing you can do about the networks tracking where they are”. That’s because you use your personal details to log into your bank account.

While your bank's security means other network-users won’t necessarily be able to access your banking details, they will potentially be able to know where and when people are travelling and that may be a problem.

He says this could be an issue for your personal safety or for keeping your home safe while you're away.

Professor Caelli suggests the best way to avoid this sort of trouble is to arrange with your bank to have ‘two factor’ security like PayPal, where you log in and the system phones you back with a security number to gain access to your account. This will boost the security on your internet banking considerably.

He says banks don’t readily offer two factor authentications but some do provide it. “Check with your bank.”

Next up, he says that you should only use shopping or banking sites that are marked as secure and highlighted in green, in the https prefix. This prefix marks an encrypted secure link between you and the bank.

That means the “... data you are typing in, is encrypted or scrambled and secure between you and the bank”.

His advice is to the point: “If it’s just marked as http, don’t use it”.

Added as a final cautious note, “be aware that, for the moment, the world out there isn’t very secure”. It’s an important point, given that even this level of security doesn’t stop the system from tracking where you are. That’s because your data has other information or metadata attached and it can be read and used to track your whereabouts.

Professor Caelli says the best thing to do when travelling and wanting to access your internet banking is, if your bank does offer two factor security or two factor authentication, use a device to access the bank and your mobile to receive the security code.