If you’re planning to travel about Central Australia around mid-August or are looking for something a little different then lock the Henley-on-Todd Regatta into your itinerary. It’s one of those colourful, wacky outback events which is a one-day “boat” race held in the typically dry riverbed of the Todd River that passes through Alice Springs. Yes, I did say boat race in a dry riverbed. I imagine it would be the only boat race in the world that would be cancelled due to the presence of water, which did actually happen in 1993. 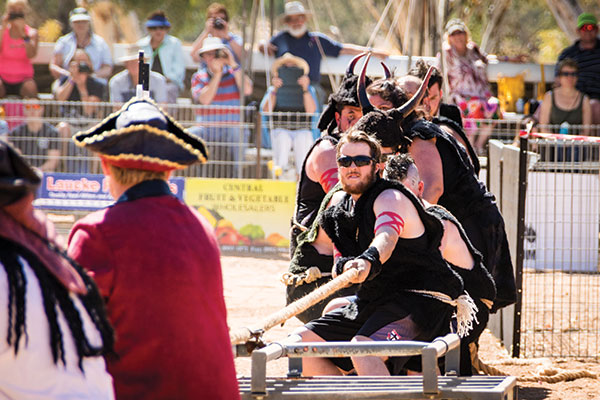 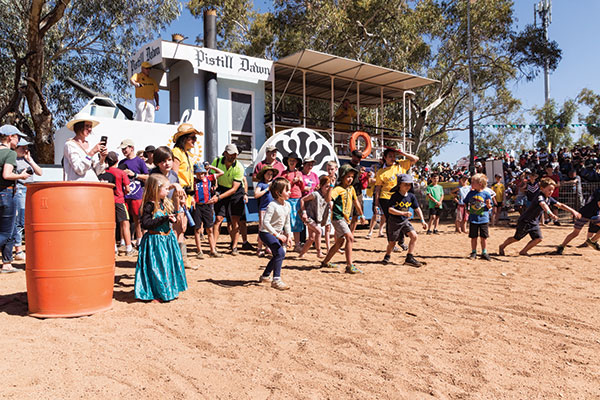 The Regatta has been running for more than 50 years starting out with its inaugural event back in 1962, as a way for locals to have some fun and raise money for charity at the same time. It’s run by the Alice Springs Rotary Club and they do an amazing job hosting the event.

Each year the event begins with a parade down the Todd Mall in the centre of town before everyone converges on the banks of the river. There’s a vibrant energy among the crowd as they wait for the starter to fire his gun on the first race and the laughs to begin. Races are open to anyone, young and old, who wish to have a crack and get involved. My whole family participated on the day in various events and we all had a blast and it’s something our kids will never forget.

Most of the races involve running in bottomless boats up and down the riverbed in both team or individual events. Comically though, you will see multiple ways contestants have to use their strength and endurance to haul boats from one end of a course to the other including carrying, pulling, rowing on a track in the sand using shovels as oars or even sand skiing, which takes a great amount of coordination in the team event. In the team events, it seems that co-ordination and not speed goes a long way in getting you over the line first.

Many of the boats are home-made and quite hilarious in character however Rotary does have quite a good stock of boats on hand for anyone who wishes to get a bow on the starting line. Some of the other events for the day include tug-o-war, a race involving giant hamster wheels, egg and spoon, kids’ lolly scramble, the boogie board tow and a sand shovelling challenge where contestants have to shovel sand into 44 gallon drums with the first to fill it being the winner.

The day culminates with ‘The Battle of the Boats’, which is fought between themed entrants, the Pirates, the Navy and the Vikings. Throughout the day you’ll see them getting about dressed up, competing fiercely, taunting each other, breaking out in water fights and entertaining the crowd in loud, comical, slapstick race participation. The Battle of the Boats sees them driving about in their huge purpose-built vessels battling with powerful water hoses and loud, colourful flour bombs exploding out of their cannons. One tip: Don’t go sitting too close to the fence line unless you fancy turning into a giant glue stick after being pasted with flour and water! The teams charge around the main arena unleashing everything they can hit each other with until they run dry. The crowd then decides through loud cheering which team is victorious in the Henley-on-Todd Battle of the Boats. Last year saw the Vikings take out the coveted award.

The Henley-on-Todd is just one of the many fantastic events that you’ll find around Alice during the winter months. You could also look out for the Alice Springs Camel Cup, The Harts Range Bush Sports Weekend (amazing), Finke Desert Race, Parrtjima Light Festival, Desert Nationals Drag Racing, Old Timers Fete, Desert Mob art show or the Red CentreNATs car show.

Besides the events you’ll also have so much exploring to do out along the stunning East or West MacDonnell Ranges, which are home to gorges, wildlife, waterholes and ancient Indigenous culture. Exploring along either side of the MacDonnell Ranges can be done in a one-day road trip but if you can, take your time and get lost out there for a few days. Following the Red Centre Way out to the West Macs the Hermannsburg Historic Precinct is an interesting stop where you can park your van up at the old Lutheran Mission. This will give you a glimpse into the life and history of the early Central Australian pioneers and the local Aranda people. An overnight stay in your caravan at the old Mission will cost you around $10. There’s no power but shower, toilet and water are available. Alternatively, you can stay at the Glen Helen Homestead Lodge or various relatively inexpensive National Park camps in the West Macs.

Exploring out along the East Macs, again there are National Park stays but the most popular stop is at the end of the 75km stretch at Ross River Resort. Based around an old historic homestead there’s beautiful campsites to set-up base with loads to explore nearby including the historic Arltunga gold fields. If you stop at Ross River, ask if you can get the key to a gate on the property to access a rock formation known as the Sphinx and another called the Great Wall. Take a drink out here for sunset, you won’t be disappointed while you sip and watch the light paint the landscape.

Getting to Alice Springs from NSW or Victoria you first need to make your way towards Adelaide before heading north to Port Augusta, then up through the middle. From most of Queensland you’re best aiming for Mount Isa then out to Three Ways just north of Tennant Creek where you’ll then turn south.

If you’re after a truly unique outback experience with laughs, culture and adventure then do yourself a favour and drag your van out to Alice this August locking in the Henley-on-Todd Regatta, to get your Central Australian experience started. I promise there’ll be memories made here that you’ll not soon forget.

Check out the full feature in issue #501 of Trade-a-Boat magazine. Subscribe today for all the latest camper trailer news, reviews and travel inspiration.