In the last six months of touring, we could count on two hands how many van parks we stayed at – each one when we desperately needed a long, hot shower, a good internet connection and uninterrupted access to 240V power. But the rest of the time we looked for cheaper options to keep our budget in check and found heaps of excellent spots, many of which came in well under $20 per night for two people, and many more that were totally free.

Lower cost mostly means less facilities, but providing you’re fairly self-sufficient, that shouldn’t be a deterrent – it’s easily balanced out by the extra space to spread out and the spectacular natural beauty to enjoy from the comfort of your camp chair, plus the money you save! 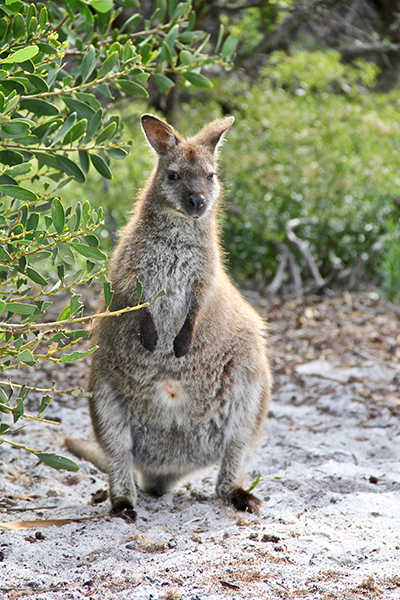 There are so many great budget camps out there, you could spend years exploring Australia and still not visit them all, so it’s nearly impossible to pick favourites. But we have pulled together some of our top picks from around the country, all worthy of adding to your budget touring list.

There’s nothing like pulling up at the end of a 60km corrugated dirt track and seeing the salty expanse that is Lake Eyre stretching for miles ahead of you. Better still, there’s every chance there’ll be no one else in sight, so you can appreciate the very real sense of isolation as you gaze across the lake bed.

Around 15m below sea level, Halligan Bay is the lowest point in Australia and an excellent place to visit this usually dry national icon. The campsite here is on our list of favourites due to its sheer remoteness and, ultimately, the vast beauty of Lake Eyre.

This is an isolated pocket of outback SA. You need to be self-sufficient and carry plenty of water. Aside from two covered picnic areas there’s no shelter here – it’s exposed to the elements and you’ll feel it. Halligan Bay is closed from 1 Dec to 15 March and it’s always worth checking road conditions before you go.

THE DIGS: The vastness of the salt bed is unmatched. Sitting back at camp and seeing it all morph and change colour as the sun sets is also pretty damn special.

AROUND AND ABOUT: Visit Halligan Bay as a side trip off the Oodnadatta Track.

Hattah Kulkyne is a lovely pocket of mallee country on the Murray River in the far northwest of Victoria. There’s free riverside bush camping at Ki Bend, Firemans Bend and Jinkers Bend, although you’ll need a 4WD and a small offroad van or camper to make the most of the riverfront seclusion on offer here.

There are no facilities at the river camps so you’ll need to be totally self-sufficient. But this lack of facilities also means a budget-friendly camp where you can sleep among (but not under!) the huge river red gums, with access to your very own patch of the Murray River.

The park is rich in a variety of birdlife that comes to make the most of the wetland environments provided by the lakes and creeks, fed by the river. Floods sometimes affect the Park so make sure you check conditions before you go.

THE DIGS: Watch the mist rise off the river in the morning and revel in the truly spectacular riverfront serenity.

AROUND AND ABOUT: Explore the park’s tracks – both 4WD and walking – during your stay. From here, it’s just a hop, skip and a jump west to the Pink Lakes at Murray Sunset NP, or north to Mildura.

Located in the far north-eastern corner of Tasmania, this scenic coastal park is somewhat of a hidden gem, often overlooked by visitors in favour of the well-known Bay of Fires immediately to the south. However, the park is just as stunning, featuring beautiful coastal heathland vegetation, white sandy beaches and lichen-encrusted boulders, as well as a series of excellent campgrounds dotted behind the dunes at Stumpys Bay.

There are actually four campgrounds here, three of which are suitable for small to medium-sized caravans. They all have a unique character, so check them all before choosing your site.

Explore the park on foot on one of the numerous coastal walks or by climbing Mount William for great views down the coast and out to the offshore islands.

THE DIGS: This is coastal camping at its best – we’re talking fishing off the rocks, walking on the beach, swimming and wildlife watching. And the park is a sanctuary for the Forester (eastern grey) kangaroo, so keep your eyes peeled.

AROUND AND ABOUT: Visit Musselroe Bay, Eddystone Point Lighthouse and the small holiday township of Ansons Bay, before venturing further afield to the Bay of Fires.

BUDGET: $13 per night for two people, plus park entry (purchase a Parks Pass in advance).

Lush rainforest dominates the roadside and campsites appear dotted throughout the clearings as the road winds through this northern NSW gem. Smoky Cape Campground is located at the northern end of Hat Head NP, around 100km south of Coffs Harbour. It’s just outside the town of South West Rocks and the famed Trial Bay Gaol, but offers a somewhat quieter spot to pull up stumps while exploring this spectacular coastline.

The campground is scattered down the hillside and the bottom section has beach access and a stretch of campsites nestled among the trees right behind the dunes. Smoky Cape Beach is long, open and wild, overlooked by a verdant headland topped by the lighthouse of the same name.

The road in is unsealed but 2WD accessible and campsites are best suited to small to medium rigs.

THE DIGS: The proximity to a huge, empty beach as well as heaps of interesting attractions make this spot a winner, and a cheaper, quieter option than staying at the busy gaol campground nearby.

AROUND AND ABOUT: Learn the interesting history of Trial Bay Gaol and explore Arakoon National Park, the town of South West Rocks, and the southern stretch of Hat Head NP.