These days, most vans come with all the travel necessities, but sometimes there’s still little changes or additions that would better suit the way you want to live on the road. After all, everyone likes things done a little differently. There are heaps of really easy, low-cost campsite fixes that can result in a more comfortable, convenient or user-friendly camping setup, and we’ve got some ideas for the handyperson, sourced from campers who appreciate the elegance of a simple (and cheap) solution. 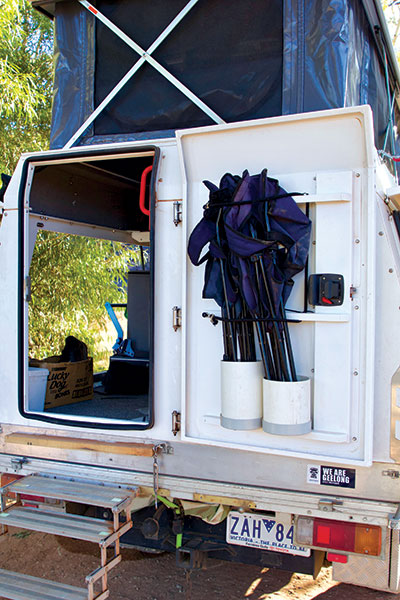 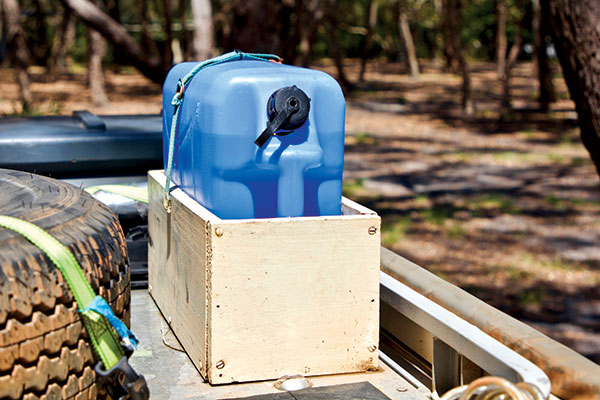 Kim and Paul from Bacchus Marsh, Vic, like to keep things simple. In line with this ethos, when travelling in their Blue Sky caravan they always throw in their recycled milk crate, which serves multiple uses, saving on valuable packing space. The crate is used as a table under the awning, an extra seat around the campfire, a step to reach the car roof and a storage box on the road. They used cable ties to attach a square of thick rubber matting to the base of the crate – an oh-so-simple and super cheap solution that makes it more comfortable to sit on and provides a more solid base for their drinks when used as a table.

Stuck for a good way to stop your camp chairs sliding about when stowed? David Smith from Geelong, Vic, has a solution. David mounted two short off-cuts of poly pipe with caps on one end to the rear door of his Tommy camper. With the capped end at the bottom, the poly pipe acts as a base for the chair legs to slot into while bungee cord is looped across the top of the chairs and attaches to rope buttons to keep them in place.

David bought a camp toaster and found it didn’t quite cut the mustard, or toast the bread to his liking, for that matter. Instead of going out to buy a different design, he decided a simple mod could solve the problem. He went through the shed and found a spare hose clamp and fencing wire, which he bent up and twisted around the clamp to hold it in place. He then attached it to the base of the original toaster and says their toast is now crisped to perfection in no time.

Many vans have purpose-built storage for gas cylinders, but if you want to carry an extra, here’s a cheap solution for securing it. You’ll need a ratchet strap tie-down set with hooks at either end, heavy-duty needle and thread, and two cargo-control stud fittings, or similar, with a base that you screw onto something solid and a removable ring to attach the ratchet strap.

Transform the strap into a holder by sewing a loop to fit the cylinder neck with two short lengths coming off it. One of these should be the hook end of the strap, which will hook onto the ring of one of the stud fittings, the other will thread through the ratchet mechanism. Sew the ratchet end of the strap to the loop of the second stud fitting. The holder needs to be strong, so sew accordingly. Depending on where you’re storing it, you may also need some rubber matting to sit under your cylinder to stop it rattling. Add a bike lock for extra security.

Sick of pulling up at camp and finding a great big mess in the back? This simple cargo net could be put to use in your car or as a way to divide or hold items in place in your van’s storage compartments. All you need is a good length of rope, the ability to tie a few simple knots and some rope buttons or other fasteners to hold the finished net in place. The area pictured is 55x80cm and took approximately 30m of rope. A quick Google search will bring up some good options for easy macramé knots that serve the purpose well.

Planning on carrying a few extra jerries on your trip? Create a simple and low-cost holder for your car roofrack or van drawbar by building a lightweight rectangular wooden box with a strap to hold the jerry in place. Measure your jerry to get the right dimensions and then cut a sheet of marine ply, or similar, to length. Glue and screw your box together, and then top off with a lick of paint and attach a length of strap with a fastener. Use a couple of bolts and washers to secure it to your rig then glue some rubber matting into the base so the bolts don’t rub against the jerry can in transit.