David Gilchrist — 11 December 2017
After a decade of crafting other people's dreams, Option RV has organised their own RV rally at Evans Head

Evans Head, a gem on the far North Coast of NSW, is known for sun, surf and beautiful beaches. However, on a weekend in October when the Option RV Owners Club met for its inaugural rally celebrating Options’ 10th anniversary, the sun and sand gave way to rain.

It seemed as though it wouldn’t stop. The rain played the blues, flooding portions of the North Coast Holiday Parks Evans Head, washing out the barefoot bowls, causing a couple of lengthy blackouts and putting a damper on the sausage sizzle. But for the more than 100 caravanners, including men, women and children, it didn’t matter – at least not too much. 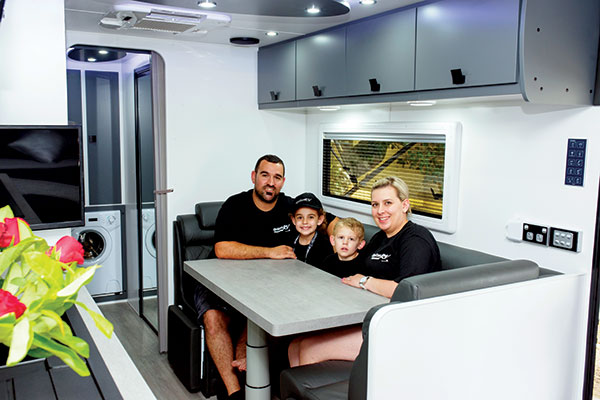 That’s because they gathered from across eastern Australia, from Melbourne to Townsville, and despite the rain, the owners of almost 50 caravans found they belonged to an extended family rather than just another caravan club. This is what unfolded.

Named after a marine surveyor, Lt Evans, RN, who carried out the first marine survey of the coastline in the area, Evans Head is a wonderful destination when the weather is good and the fish are jumping. Great beaches include Shark Bay for novice surfers, and Airforce Beach for 4WD enthusiasts.

When Caravan World magazine arrived, we were in time to join the conversation around a sausage sizzle and keen to discover and enjoy Evans Head’s natural beauty. And then the rain started to fall. That didn’t matter; it was just an opportunity to retire to some Option RV caravans and yarn to the owners.

TEN YEARS IN THE MAKING

It’s not that it’s remarkably different. It has quality suspension and is well appointed. In fact, other than a rather heavy looking benchtop, it’s on par with the typical quality product associated with Option RV.

In a break in the rain, the family sat below their awning and explained why owning Option RV has meant waiting a decade to enjoy their own caravan. Phil Dumaloski takes up a story that dated back to 2007 when his father Chris started the business, and then shortly afterwards encouraged his sons Phil, Steve and Damien to pitch in to get things moving.

“We thought, there’s something in this, and we actually fell in love with building vans. We started building 35 units a year and then got involved with Caravan World Dealership on the Sunshine Coast (not connected with Caravan World magazine) and things escalated from there on,” Phil explains.

Phil says that for the last decade the family business has been busy building “everyone else’s dreams,” and they’ve been so busy that it took this long for them to find the time to build a van that the Dumaloski family could share.

Now Phil reckons they’ve got the time to get out and about and enjoy their own Option RV caravan – capable of housing his parents Chris and Mary, or perhaps Phil, his wife Lench and their bubbly children Mia and Michael.

Sitting beside daughter-in-law Lench, Mary Dumaloski grew teary glancing down the rows of Option RV vans that had assembled for the inaugural club rally. She says, “our customers become more like friends and family,” and the idea that so many owners had thought so much about their vans and the family overwhelmed her.

It was a sentiment that Lench echoes later in the evening when we met the entire group of club members for dinner at the Evans Head Bowls Club, saying their customers “were family”.

While munching on mouth-watering Chinese tucker, Option RV patriarch Chris underscores the idea, saying business “grew not just from work, but on memories”.

Among all the Option RV owners, Dennis and Alice Smith are some of Option RV’s earliest clients. They bought their RV within the first 12 months of the company’s formation.

It happened when a friend’s caravan kept blowing 12V lights. After the friend had used up any spares he had, and then all of Dennis’ spare lights, they wandered over to a caravan dealership to see if they could buy some new ones. Instead of buying the lights the two men ended up buying new vans. Dennis purchased Option RV’s 47th van produced and his mate picked up number 48.

So keen to see their new van, Dennis and Alice left their home at Port Stephens on the NSW central coast and drove for 1000km to Melbourne’s northern outskirts. They then moved into the caravan park near the Option RV factory so they could visit daily and watch their van being built.

The couple reckon they decided upon the Option RV because it would enable them to ‘free camp’, and it had the host of fixtures and fittings – including satellite television – that they didn’t have in their old caravan. Moreover, the couple thought the van was “value for money”.

A decade later while camping at Woodford on Queensland’s Sunshine Coast hinterland, the couple bumped into other Option owners who told them about the club and its first rally.

“We thought,” Alice says, “what a great thing to be able to be part of.”

Thinking about the Dumaloski family he added with a smile, “None of us could hold them in higher esteem than what they are”.

Walking around the Option RV club members, one theme dominated the conversation. It was simply the generosity and kind spirit of the Dumaloskis. For example, so taken by the family and the quality of their product, one member has joined the rally despite having just ordered her van and having to camp in another brand caravan while she waited for hers to be built.

Then there was the story of a pair of long-term customers, Allan and Zelma Shipton. The ever-witty Zelma reckons their names are easy to remember because: “Allan starts the alphabet and I have always finished it”.

Explaining how they ended up with an

Option RV, Zelma says, “They got us in straight away because we had an accident in our previous van. We were trying to think of a name for our new van when Phil said he’d been to the Caribbean for his honeymoon. So, we called it the Caribbean and it’s been a honeymoon ever since.”

Adventurers at heart, every winter they pack up, leave their NSW Central Coast home, and head to the Gulf of Carpentaria – returning home every September or October.

For them, their caravan design meant things like the simplicity of two 12V fridges and drawers rather than a slide-out pantry, and a generous mid-van en-suite.

They’d arrived at the Option RV rally expecting that Option owners would be as nice as the Dumaloski family. Allan says that the group hadn’t disappointed them and they’d already meet many new mates.