In Australia, we can generally sit around a campfire safe in the knowledge we’re not at risk of an animal attack.  There are no bears, lions, or wolves to interrupt our night-time reverie like there is in the US or South Africa. However, if you’re heading to northern Queensland to escape the winter chill, it’s ill-advised to be complacent about our own native predators, especially the world’s largest reptile – the saltwater crocodile.

Many of us affectionately refer to these four-legged killing machines as ‘salties’. Maybe that’s a problem. Perhaps we’ve become too familiar with them and too inclined to think they spend their time lying motionless in the sun. Hop on a croc tour, and we’ll see the tour operators dropping food to them as if they were tame pets. Nothing is further from the truth. 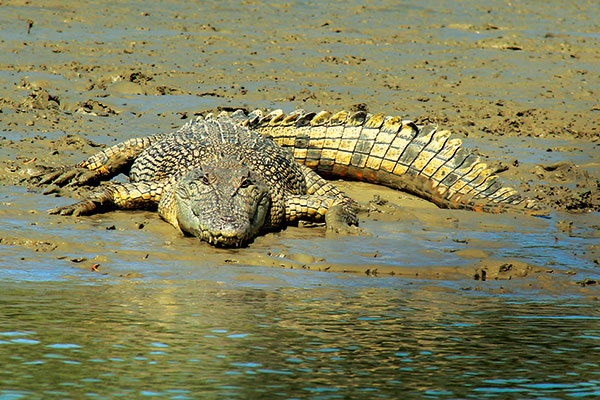 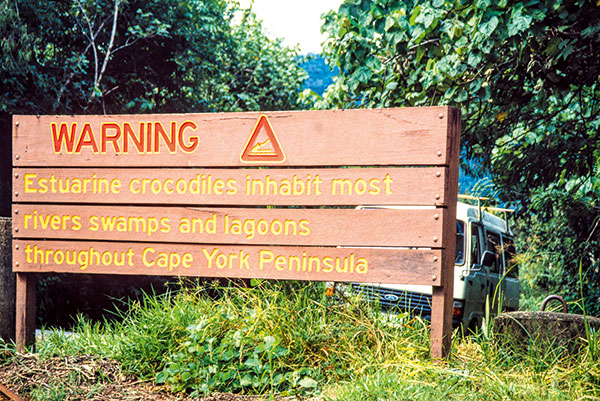 The saltwater crocodile is an ambush predator capable of swimming in bursts at 25-30km/h. The bigger adult males are 6m long and can weigh 1000kg (as long as a Hilux and as heavy as a camper trailer), while smaller adult females range from 2.7m long and weigh 100kg (as long as a kayak and as heavy as the bull bar on the front of your tow tug).  Furthermore, the saltwater crocodile holds the record for the highest bite force ever recorded in any animal alive today. It even surpasses the strength estimated for the bite of a Tyrannosaurus rex. These statistics demand respect.

Unlike a Great White shark, which is most likely to take a nip on a human because it mistakes us for a seal or something similar, for salties, we are firmly on their menu. These creatures are opportunistic hunters that will eat virtually anything that moves.

On average, one person is fatally taken by a saltwater crocodile every year in Australia, with rates three times that for casualties. But there’s a lot we can do to minimise our risk of an unexpected and unwanted encounter.

Both the Queensland and Northern Territory governments have instituted ‘Be Crocwise’ initiatives that aim to educate the public about the risks posed by salties. Some of their risk mitigation measures are summarised as follows.

Only enter the water if you have a reasonable excuse, e.g. launching a boat.

When in doubt about crocodiles, don’t swim where they may live, even if there is no warning sign present.

When fishing from the bank, always stand a few metres back from the water’s edge to give you some reaction time and to discourage an attack. And never stand on logs or branches overhanging the water.

In a boat, don’t get close to crocs simply to take a closer look. You might get more than you bargained for and it’s illegal.

Don’t dangle your arms and legs over the side of the boat. They’ll look like a tasty snack to a croc.

Avoid camping in places where native animals and domestic stock drink. This is a natural feeding ground and ambush site.

Always make sure to camp at least 2m above the high water mark and at least 50m from the water’s edge.

Don’t leave food scraps, fish frames or bait at your campsite, and always check that previous campers have not left these behind.

Never prepare food, or wash dishes near the water’s edge. And never clean fish around campsites or at boat ramps as crocs will be more likely to associate humans with food.

Like most other reptiles crocs are nocturnal, so be more aware at night.

The breeding season for the saltie is September to April. They’re more aggressive during this period.

If travelling with pets multiply everything above by 10, as your best friend may not be the biggest dog in the fight!

Saltwater crocodiles live in estuarine areas and open ocean from Broome in Western Australia to the Burdekin River in Queensland. This area encompasses a lot of ground we overlanders love to travel.

The distribution of salties occupies the same bits of the ocean as Tiger shark, Irukandji and Box jellyfish. If that’s not enough reason to stay out of the water north of the Tropic of Capricorn, we don’t know what is!

Remember that flooding and storm activity can temporarily increase the mobility and distribution crocodiles.  This means that crocs may be in places they don’t usually inhabit. The bottom line is – be alert.