Caravans are fairly simple to maintain.

The most important things to do are keep an eye on tyre pressures and, once a year or every 10,000km, adjust the bearings and brakes. 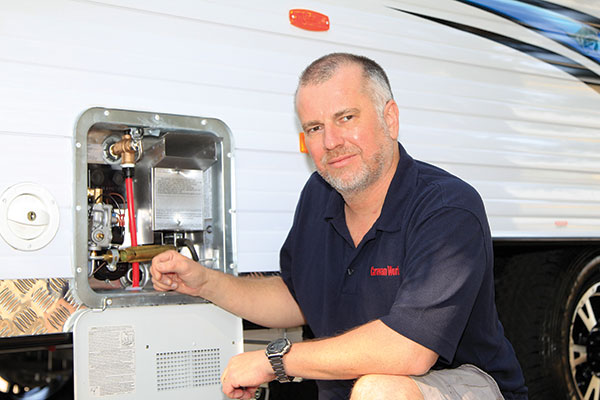 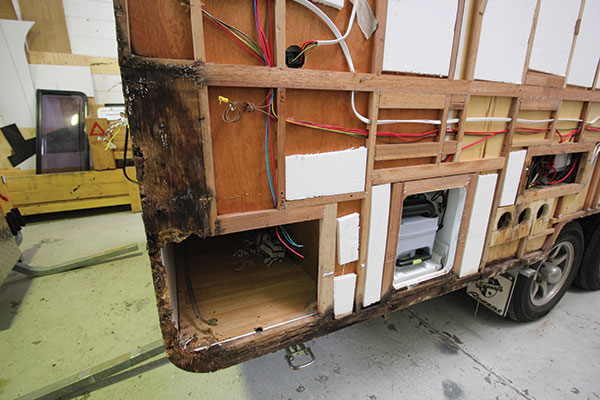 However, that doesn’t mean nothing can go awry. There are many components on a van that can and do fail over time or are easily damaged. If you don’t notice these problems quickly, they can get a lot worse.

Here, we’ll go through the sorts of things that might go wrong with your van and what you can do about it. These are areas to which you should pay attention every once in a while. Some of these you should notice easily enough when washing your van or setting up camp; others you may need to crawl under and around your van to check.

These are also areas you should definitely check when looking over a used van you’re thinking of buying.

The most common problem that can go unnoticed, especially in aluminium-clad caravans, is water damage. Exterior joins, especially on aluminium-clad vans, are prone to developing cracks or the sealant separates from the cladding surface. It’s then only a matter of time before water leaks develop. Have a look at all the joins, especially the J-moulds (which are the J-shaped moulds that seal the join between the side panels and the roof/front/rear panels), looking for separation of the join or cracked sealant.

There are a few other spots on a caravan body that might eventually become the source of a water leak. Roof hatches are easy to forget because they are difficult to get to. Grab a ladder and climb up to inspect the hatch or hatches. You need to be really careful when putting weight on the roof with aluminium-clad timber vans especially – keep as close as possible to the sides of the roof. You won’t always see an obvious entry point for water leaks. So have a look inside around the upper panels, looking for any dampness or discolouration of interior linings.

There’s an art to resealing a caravan using silastic but, with a bit of practice, it’s not that hard to do. You have to remove old sealant from the area (using a plastic scraper so as to not damage the surfaces) and clean it with wax and grease remover to ensure a good bond. Using a good quality V4 non-ascetic sealant, apply a bead along the join you want to seal. Then spray some soapy water around the area, which will stop the silicone from spreading and wipe off the excess silicone. It’s best to use something like your scraping tool to scrape off the initial excess silicone and wipe it on to a rag. Use another clean rag to wipe the excess silicone from the surface itself.

If the leaks have been there for a while, the timber will have rotted. The only way to fix this is to strip the cladding off around the relevant section and inspect the timber. If it is badly rotted, the affected sections will need to be cut out and replaced. It’s a fairly big job.

A source of water leaks you might not expect on an aluminium clad van is from fatigue cracks. Generally, these cracks appear only on older caravans on the aluminium cladding at weak points such as around windows or doors, where the van body has flexed. Have a close look over the van’s cladding especially around doors, hatches, vents, and windows for signs of fatigue cracks. On aluminium-frame caravans, also look for missing or loose pop-rivets. Again, frame flexing can cause them to weaken and then break or loosen.

Fatigue cracks in aluminium sheeting can’t be effectively repaired – the sheets must be replaced. You might be lucky in that the fatigue crack doesn’t leak or does so minimally but it’s only a matter of time before it becomes worse.

Broken or corroded wiring is another problem that you don’t want when on tour, and it can happen all too easily, especially at the trailer plug. Because wiring plug housings are not fully sealed, they let moisture in. The plug cover should be removed periodically to check the state of the wiring – if the wires are corroded or are fraying at the connections then it’s time to pull the wires out and clean it all up. Better still, buy a new replacement plug. It’s cheap insurance.

The same applies to taillights and marker lights – if you’re not running LEDs, that is. Trailer lights are hopelessly inadequate in keeping out moisture as a rule, and so like the trailer plug, you need to periodically remove the lenses and see that the wire connectors and bulb holders have not become corroded.

A gas hot water service is usually very reliable but it’s worth the effort to have a close look at the tank for leaks at where the element assembly seals to the tank body or where the tank halves have been joined at the factory.