Sometimes the tug of war between recreational interests can play itself out in strange ways. When Greg Thomson decided a few years back that he would like a boat, his wife Amanda and their three daughters pondered for a short while before declaring that “No, they wanted a caravan,” because it would be more family-friendly. Amanda and the girls won that discussion, and Greg bought a kayak for fishing.

Greg, from North Rothbury, NSW, came from a family that had long been engaged in camping and outdoor recreation. So he wasn’t overly concerned by the switch in priorities. His father had a big canvas tent with internal rooms. Growing up at Cessnock, in the Hunter Valley, he holidayed at Swansea, just down on the coast, and spent many happy holidays there. 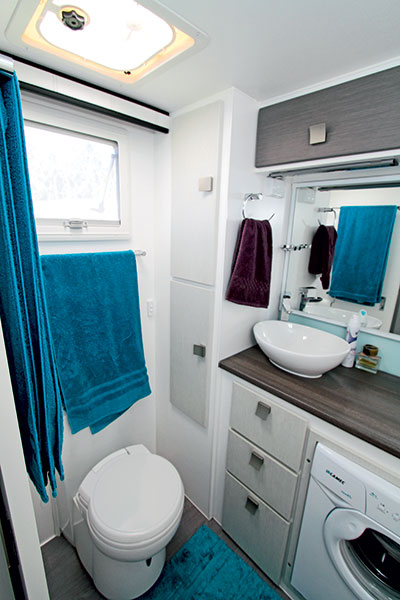 Eventually the young couple settled down in NSW, in the Hunter Valley, where Greg gained a job working in the coal mines operating a 600 tonne Hitachi excavator valued at $14 million, and Amanda launched her own small cleaning business. It wasn’t long before they became engaged and started a family, followed by a wedding. They now have three daughters: Chelsea, 14; Tayla, 13; and Madison, 8.

With Amanda’s grandparents still travelling around the country in their early 70s and showing what was possible, it came time three years ago for pondering family activities. The boat idea was soon dispensed with, and thoughts turned to caravans.

“We set ourselves a budget and went off to the Sydney Caravan and Camping Show three years ago,” Greg explained.

“We really knew nothing of caravans and everything we liked was way out of our price range, until we got to the Jayco stand.

“There we saw a van (a 17ft Starcraft pop-top with three bunks) we really liked the look of and while it was out of our existing budget, it was still within range – with a bit of work.

“To buy it meant we had to come up with an additional $22,000, but we put our shoulders to the wheel and through both Amanda and myself doing lots of overtime – something I can do anytime in my job – and spending absolutely nothing on anything else, we came up with that in six months.”

The Thomsons added an offroad hitch, an external shower and shifted the spare wheel to the rear. They enjoyed a trip to Queensland, taking in Rainbow Beach, visiting Amanda’s grandparents in Bundaberg, Fraser Island, Hervey Bay and back down the coast.

“That’s where the little problems started to get the better of us,” Greg said.

“We had a lot of heavy rain, and found we had leaks everywhere. Screws began pulling out of hinges and other minor problems.

“Every time I took the van in to have something else fixed, I was just part of a queue. I said to Amanda: ‘That’s it, we’re done with this van.’ We wanted something that we could settle into for quite a few years and learn to enjoy.”

They looked at five or six vans, including a Supreme, a Crusader and a Lotus, all of which they liked, but which didn’t suit for some reason or were out of their price range. Then they saw a New Age Manta Ray MR19BC, a 19ft Bunk Combo. It was just what they were after.

The new van was everything they’d hoped for. “You can tell this is a quality van. Everything fits and works, there’s craftsmanship and pride in its construction,” boasts Greg. “We’re very happy.”

They found the van was spacious and comfortable, with a desirable north-south bed arrangement, and the kids in their own bunks at the far end.

The Thomsons started out towing the Manta Ray with their existing Pajero, but with a 2200kg Tare weight, found that the van was tending to push the car around in some circumstances.

Coming from a truck driving background, Greg knew that wasn’t a situation he wanted to be in, so the Pajero went in favour of a 200 Series LandCruiser. The Cruiser has since been upgraded with a 3in exhaust for “more low-down kick”, a front lift of 25mm to obtain a more level ride, airbags and a Rhino roof rack.

“I like to drive for economy,” said Greg. “I sit on about 90km/h and tow in Sports mode in fifth gear, occasionally shifting up into sixth gear coming off hills. We get about 15-16L per hundred kilometres.”

Along with the 16L in the gas/mains power hot water system when fully loaded, the Thomsons have enough water for about three days, which suits most of their travelling. Greg is toying with a third water tank, behind the axles, but has been stymied by the quoted price.

The van came with 120W of solar panels on the roof and a separate Anderson plug on the rear bumper to permit external panels to be plugged in. This all feeds through a Drifter Control Panel to a single 105Ah AGM battery, though Greg plans to upgrade this with a second battery. Other planned upgrades include adding an oven and a more stable bike rack for the girls.

At the moment, the Thomsons get in a lot of three to four day trips around the NSW central and lower north coast. Greg’s work schedule keeps him going on a rotating roster and he has every second weekend off and weekdays as well, so they can get a trip in during the week through the school holidays.

Amanda isn’t a passive partner and does some of the towing, despite having been out of the truck driving game for many years.

“We love the caravanning,” Amanda said. “I wanted more family time together, and this serves us well.”

Greg agrees: “As a family we really enjoy what we do with the van. Our focus is low cost so we can afford to go away more often, thus we enjoy free camping where we can. The caravan meets that need perfectly.”

The full feature appeared in Caravan World #561. Subscribe today for the latest caravan reviews and news every month!