Travelling with smaller and lighter caravans

Contemporary caravans seem to come with endless lists of features and options these days but that comes with both a size and weight penalty. Has the time arrived to ask ourselves honestly: can we live in smaller and lighter caravans? 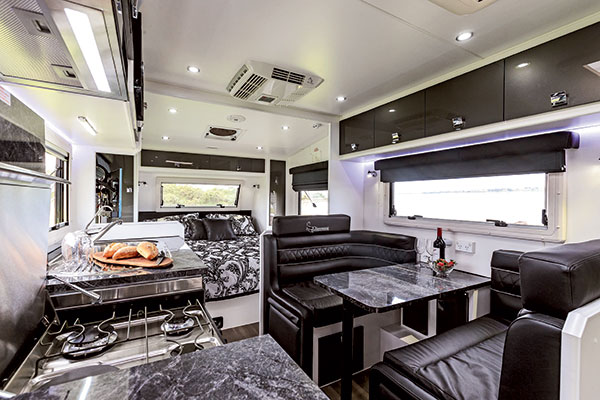 Over a decade or so ago I was at an industry conference. At the time, the caravan industry was using a manufacturing expert, Neil Chesney, to advise manufacturers on caravan construction – Neil having gained plenty of experience in the ‘60s and ‘70s with his own Brisbane-based company.

At the conference Neil expressed his concern regarding the rising weight of caravans generally and commented, if we don’t do something about the weight factor then in about 10 years time we will all be using Toyota LandCruisers as tow vehicles. How right he was.

We have certainly seen that prediction come to pass – not necessarily all LandCruisers but certainly tow vehicles of various types with a 3500kg tow rating. I remember the comment well because even then it was obvious a problem was lurking. Neil was actually talking about caravan construction techniques but I reckon there has been another factor at play, too. It’s what we might call “user desires”, for want of a better expression, and I am not sure whether that is manufacturer driven or consumer driven – or a bit of both.

I thought about that Viscount caravan a few times at the BAV event last year. It seemed to me that quite a few entrants had added all the accessory goodies they could think about in order to impress the judges. That’s even after the many items we have come to accept as ‘standard’ fittings.

Over the last 15 years, I have seen the following items evolve from being non-existent, to nice-to-have options, to standard items: microwave oven, air-conditioner, 12V lighting, roll-out awning, batteries, fixed beds and bathrooms. The latter is almost a category in itself – moving from the under-bed porta-potti to a combo shower/toilet facility to a bathroom with fully separate facilities. Washing machines, generators, inverters and diesel/gas heaters have become much more common. An up-and-coming feature seems to be an external slide-out kitchen in caravans. They have long been a feature of camper trailers but as the only kitchen, not a second one.

Adding more and more items to any van either means a heavier rig, a larger van or both. I’m wondering if we have reached a finite point and the time has come to consider not so much whether we can do ‘more with less’ but rather whether we can do the ‘same with less’?  In short, can we as RVers – and by that I not only mean caravanners but also motorhomers, fifth wheelers and the camper trailer brigade – do our travelling in smaller and/or lighter rigs? Just so it’s clear, I am not suggesting we return to the Viscount days – I still like my comforts and conveniences. But here’s some food for thought.

Like the RVs they are fitted into, appliances have grown in size – cooktops and fridges for example. Four-burner/grill and ovens are fairly standard, as are 150L and even 175L fridges. How many people really use four-burners for cooking regularly? I like a grill but instead of an oven, could a Weber-style barbecue be used as an oven instead? That also gets the heat and cooking fumes outside. Families definitely need a large fridge, but does a couple? Would it be more space effective to have an under-bench fridge and a separate drawer-style fridge for drinks under the bed or maybe even a chest-style freezer in the rear of the tow vehicle? Items like cooktops can vary in size. I’ve seen in a US-built RV a two-burner cooktop and a round sink that alone took up a staggering amount of benchtop. I have also seen in a European-built van a three-burner cooktop and a washing up bowl that took up considerably less space and still offered some valuable benchtop working area into the bargain.

Van electrics have come a long way since the 240V/12V light fitting but we have almost become carried away with events. LED light globes are a real winner – bright light and low power means a smaller battery and less heavy light fittings. But other power suckers like TVs, fridges, power awnings and water pumps have certainly become more prolific. Since most are 12V items, that means more battery capacity and more weight, especially if generators are thrown into the equation. There’s no quick answer here, lithium batteries are still very expensive but the solution might be in the form of less battery capacity but more solar generating capacity – the top of an RV is ideal for a decent solar panel installation.

Bathrooms in RVs tend to take up a considerable amount of space and I wonder if they can be used in a better way elsewhere. I know there are travellers who never stay in caravan parks and therefore appreciate roomy facilities. For those though who just use the bathroom more sparingly or just overnight would a smaller combo bathroom be a better deal? Some European-built motorhomes have a swinging wall between the shower and toilet/vanity to keep the two areas separate but still using less space overall.

There’s no doubt about the value of the space a slide-out can add to any caravan or motorhome, usually in increasing the living and/or bedroom areas. It’s slightly ironic that slide-outs are mostly used in larger rigs but would be more effective in smaller ones. Slide-outs do add weight and mechanical complexity to an RV and I have actually seen some layouts where there’s no benefit from the slide-out at all. What were they thinking? In many cases, sitting under the awning is much more enjoyable than being inside.

It’s a fact that single beds are often so much easier and more practical than a double bed – island or otherwise. In some smaller layouts single beds can double as lounges and they give a layout designer much more flexibility. So why do so many buyers have a preference for RVs with double beds? A good question and one I am not going to speculate on, but I do know people who reckon a single bed gives them a better night’s sleep! An alternative are designs that have an elevating bed and a lounge or dinette underneath.

This really applies to motorhomers. All the European cab chassis manufacturers currently in Australia offer swivelling driver’s cab seats. Currently neither Japanese nor Chinese trucks offer that same feature. It’s a space-saving gift for any layout designer – two seats that have a dual purpose. Throw in a moveable table in between and there’s a small dinette.

All of the above are a few random examples of how we could downsize – there are others to be sure. Caravan manufacturers might well ask if there’s a market there but I reckon the camper trailer mob have been working on it for several years now. So-called hybrid hard-shell camper trailers meet the need for those who still prefer the camper trailer lifestyle but with as little flapping canvas as possible. The line between the hybrids and full-size caravans is very blurry so it’s not hard to see the potential. Downsizing a caravan means downsizing the tow vehicle. It’s a bit clichéd to end on a cliché but has the time come for a bit of thinking outside the box to better use the space inside the box?