Sometimes destiny meets you head on; circumstances blindside you and all your groundwork and cautions are blasted away and your survival becomes as much a matter of luck as of preparation. For Canberra’s Bev Flynn, and her helplessly-watching husband Ryan, one of those moments came during a caravan trip south to Melbourne in February 2016.

You’d think all possible major concerns were covered. The Flynn’s 21ft 6in dual-axle Elite caravan was just five years old. It had been meticulously maintained and had just gone through an all-points check, as had the tow vehicle, the couple’s 70 Series LandCruiser, before setting off. 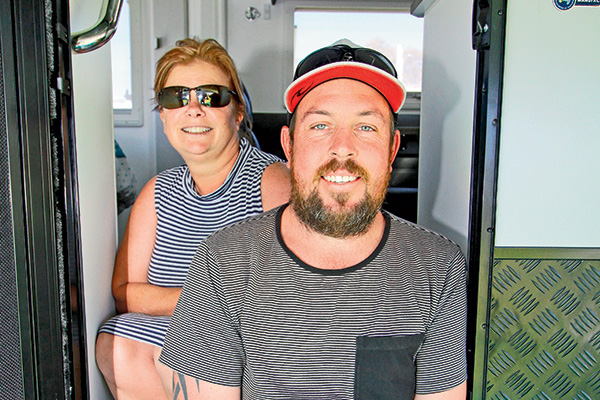 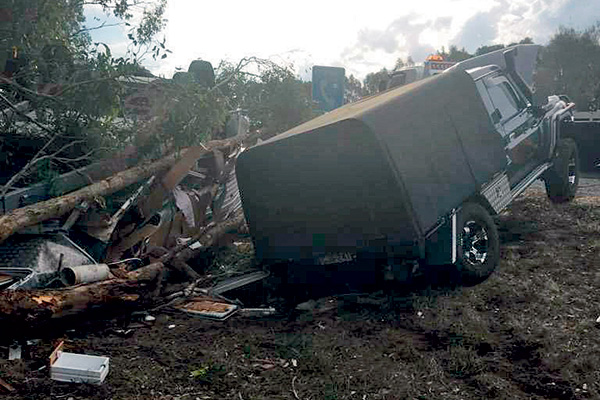 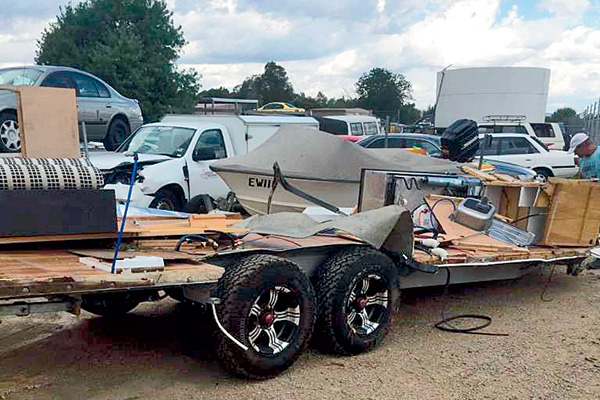 They were heading to Apollo Bay on Victoria’s Great Ocean Road to meet up with some old friends for a few weeks’ break from their busy construction business. Bev was driving the LandCruiser, towing the van with Ryan following behind, towing their boat.

On the Hume Highway near Benalla, the nightmare hit.

All the studs holding the Toyota’s passenger side rear wheel sheared off, sending the wheel flying. That corner of the car dropped to the ground, lifting the diagonally opposite front wheel clear of the ground. With only one wheel to steer with and the nose of the caravan now on the road, Ryan saw the caravan fishtail and swing around in a wide arc, hauling the Toyota backwards at the armco barrier over a deep culvert.

The whole rig ploughed through the steel fencing and into mid-air, with the car striking a gum tree well clear of the base. The three tonne van peeled the towbar off the back of the car, wiping itself out on the surrounding countryside, while the tree absorbed the punishment and then fell sideways with the Toyota, still looking surprisingly undamaged, landing beside the shattered trunk.

Ryan almost crashed his car and trailer, too, while stopping and arrived on scene to find Bev shaken but largely unhurt. She was checked out medically and other than neck pains and a headache, from which she still suffers, she was able to walk away.

The caravan wasn’t so lucky. They were able to recover most of the contents from the wreckage – including the Honda generator which survived undamaged although it finished 50m away. Surprisingly, eggs in what remained of the fridge were unbroken.

As they were only a few hours from Melbourne, they continued on to their friends’ home to recover. Within a couple of days, Ryan raised the hanging question: “Do we buy another caravan? We know we love it, but if we don’t do it again quickly we probably never will.”

Within another couple of days, the Flynns were driving around Melbourne checking out the replacement options.

You’d have to agree, this points to pretty committed caravanners.

The Elite, which had just spectacularly ceased to exist, was the first caravan for the Flynns. They had decided to buy it after some friends had bought a new one themselves – the latest in a run of four or five vans – and the Flynns took a shine to it and decided to get one, too.

The Flynns went from complete non-caravanners to dedicated travellers, squeezing in trips whenever possible, over weekends – especially down to the south coast of NSW, which is only a few hours’ drive from their home – and occasionally longer. On one trip, they headed to visit friends in Cobram on the Murray, and got home eight weeks later.

When the Elite was destroyed, Ryan and Bev went looking for a replacement with some ideas they had develop during their years with the Elite.

They decided they didn’t want aluminium cladding, which they felt was too easily damaged, preferring Alucobond, an aluminium composite which is heavier but stronger, a better insulator and, say the Flynns, neater.

They wanted lots of 12V and USB ports around the van, and a bigger fridge (a 224L unit replaced the 186L in the destroyed van). Improved suspension would give the option of taking the van offroad; the old one had bottomed out a couple of times on short dirt road trips.

And the crash dictated that they wanted a stability control system, and a good offroad hitch.

RETREAT TO THE RESCUE

Over the ensuing week they went to a number of manufacturers but felt that they weren’t being offered what they wanted or the price was too high, until they got to Retreat.

“We Googled the company, and then went to the factory,” explained Ryan. “Each section was neat and tidy, which to my builder’s eye said ‘pride in workmanship’ and an organised process. The company owners came down and met us. They offered us a two-year Australia-wide warranty on the van and 18 months on all the appliances.

“We liked what we saw and began negotiating prices, but it looked like it was going to be out of our range, so we began to talk about cutting things out of our shopping list, but when Retreat heard about the accident they came to the party on a few things and that hooked us, so we did
a deal.

The base model for the Flynns’ caravan is the Hamilton, but with several changes. They added six inches (15cm) in the bedroom to make the corner cupboards more workable, added 12in (30cm) to the kitchen to fit the leather club lounge – a big improvement over the eating nook in the old van - and to increase the size of the drawers and the bench, and a further six inches to the ensuite for a bigger shower recess.

The chassis is six inches deep and hot-dip galvanised, all the way back past the suspension, with a 4in riser on top. This gives the van an imposing height, assisted by the dual trailing arm double shock absorber G&S Control Rider suspension. As finished it’s about 15cm taller than the old Elite, and just fits into the Flynns’ storage shed. Assisting in the control of the van is a Dexter anti-sway system.

“You just don’t know it’s on the back of the car,” Ryan said.

A clever idea added from their old van was two deep, vertical storage boxes built into the van along the rear wall. These provide handy homes for large items, such as tables, chairs, generator and so on.

The finished van is stylish, with a clean, modern look. Retreat said they thought it the best Hamilton they’d produced.

The finished van has a Tare of 3012kg, a ball weight of 248kg and is towed around by a LandCruiser Sahara V8 auto, standard except for a 2in lift kit and weight distribution bars. Towing is done in Drive; fuel consumption is about 18L/100km on highway travelling.

Bev still does much of the towing, as she did with the old van, often driving down to the coast, backing into a site and setting everything up, ready for Ryan to come down after work and make the most of the weekend. She’ll then tow it home afterwards. Both are keen golfers and recently completed a trip down the Murray, taking in courses along the way.

It’s the social aspect to caravanning which the Flynns enjoy the most, getting away from the pressures of business.

“We love it,” Ryan concludes. “Caravanning is not a Grey Nomad thing anymore. We see a lot of young families out there and get to meet a lot of interesting people. It’s a great way to get away.”