Getting brake linings replaced is a simple task but if you have not done a drum brake replacement before, I would suggest getting an expert to look over your work before using your vehicle or van, because it is a safety-related item. I do not suggest you undertake this work if you are not sure of what you are doing or have not ever worked on your vehicle’s brakes. In that case, use this as a general indication of what your mechanic would do when replacing your brakes.

For this job, the parts you will need include the brake linings bonded to their backing plates, the brake drums and a small parts kit (which includes the various springs, pins and retainers required).

Like anything you do on your vehicle that involves safety, make sure you are working on a firm, dry surface and with plenty of light. Do not rush the job or attempt to do it when tired or preoccupied. 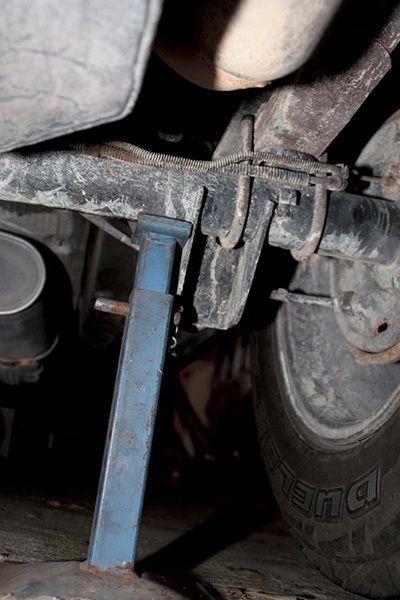 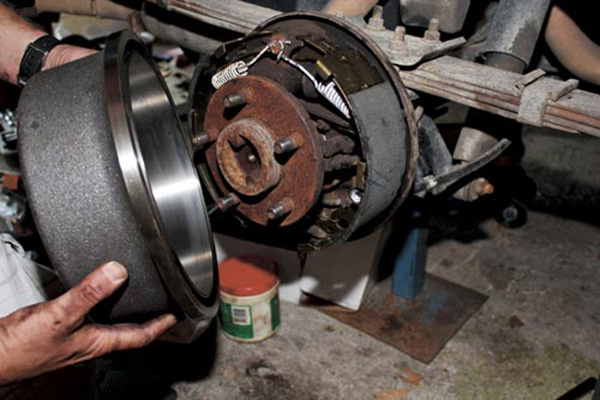 The brake linings on this vehicle were contaminated by oil from a leaking axle seal, and this contamination meant the linings were unserviceable – they were providing inconsistent braking performance. Even though there was a serviceable amount of brake lining left, it was time to whip them out and replace them. Given how cheap brake drums are, rather than getting the (clearly old and quite worn) existing drums checked professionally, we thought it prudent to simply replace them with new ones. The old drums had a significant lip on them, suggesting wear was extensive and there were also score marks on the wear surface, again suggesting excessive wear or contamination. A micrometre can be used to measure wear.

First release the handbrake, but keep the vehicle in gear if it’s a manual or in Park if it’s an auto. Chock a wheel that’s not being worked on. Loosen the wheel nuts a quarter of a turn so that when you jack up the wheel later, the wheel nuts won’t be so difficult to remove. Jack up your vehicle at the wheel being worked on, and use a vehicle stand to support it. I use a hydraulic jack to raise the vehicle, then support the vehicle with a stand and keep the hydraulic jack in place as a back-up support.

Remove the loosened wheel nuts and then the wheel. I usually place the wheel underneath the vehicle – this saves me from tripping over it and if the vehicle did fall off the supports, there is something to prevent it from hitting the ground – or you.

Remove the brake drum, first removing any clips that may be securing the drum to the wheel nuts. Provided the handbrake is off and the brake is not over-adjusted, you should find this relatively easy to do. In the unlikely scenario where you can’t get the drum off, there is an adjustment problem – you will need to loosen the brakes via the adjuster.

The holddown springs and spring retainers can now be removed from the pins, and the pins themselves removed. This can be a bit difficult to do, but a long sharp-nosed set of pliers twisting the serrated edges within the recess of the spring retainer should work to remove the retainer and spring.

Now the brake shoe assembly can be removed, first allowing the strut and spring to drop out of the assembly (with the strut to be reused later) and the park brake lever (in this case still attached to the cable) disengaged from the lining backing plate. The adjuster screw assembly, including adjuster lever, can now be removed from the old unit, cleaned up with brake cleaner and fitted to the new brake shoe assembly. A new shoe spring can be fitted at this time also.

Before fitting the brake shoe assembly to the backing plate, apply grease to the contact surfaces on the backing plate. Then the brake shoe assembly can be married up to the backing plate, and the strut and new spring fitted and parking brake lever re-attached. The new holddown springs and retainers can be fitted, and then the adjuster cable can be put onto the anchor pin. Then the shoe guide plate is refitted, followed by the new return springs, with the adjuster cable guide fitted to the new trailing shoe spring before fitting the spring.

The adjuster cable is now attached to the adjuster lever, and the drum refitted. You may need to re-adjust the shoes via the adjustment lever to allow the drum to fit over the shoe assembly.

Then fit the drum locating clip/s, if supplied, and then the wheel and secure the wheel nuts. With the vehicle in neutral (confirm that at least one wheel is safely chocked first) see that the wheel can rotate smoothly. Adjust the adjuster via the backing plate with a screwdriver until the wheel stops – then back off the adjustment until the wheel can move freely.

Now let the vehicle down off its supports and torque up the wheel nuts. Repeat the procedure for the opposing wheel and then road test.