When Caravan World asked for a volunteer to write a story about quirky small vehicle and van combos, it wasn’t so much me stepping forward from the ragged line of disheveled contributors as much as everyone else taking a large step back. I should have known that playing on my phone would cost me more than a Pokémon stop one day.

So what we have here, in a country overflowing with expensive and leviathan vehicles and vans, is a combination that you don’t have to blow the super on in one hit and that you can just about park next to your lawn mower in the shed. When you’re refuelling on tour, you can be confident that the bill will be a quick wave of PayPass every time, no matter what. Try that with your LandCruiser – you’ll be punching PINs and soon enough anything else nearby, too. 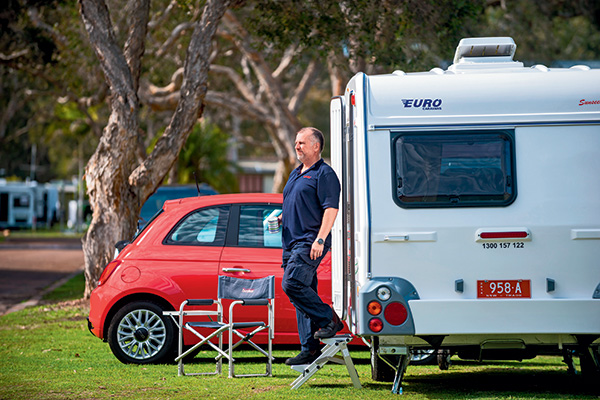 There isn’t exactly a catalogue of littlies to pick from when you want to take downsizing to its most shrunken form.

I picked out Euro Caravans’ Polish-built Glider and SunSeeker models, that start out at just 550kg Tare and with an internal body length of just over 9ft (2.74m). Perfect! Now for something to tow it with.

I started out with 4WDs. The Suzuki Jimny looked the goods but just about the only thing you can slap behind it is a bumper sticker.

So I gave up and resorted to that go-to retro tow tug, the Fiat 500.

This model is called the Pop; it’s as inappropriate a name as Fiat could possibly conjure for this car. There should be a Gran. I’d buy it, so long as it smelled like Cussons Imperial Leather.

The Pop costs just $19,000 drive-away and once you’ve got a towbar fitted, it’s got a stump-pulling tow capacity of 800kg and a TBM of 45kg. This is before you fit your payload such as two persons and a can of Diet Coke. It then drops down to something like 25kg.

Fiat gave up on the 875cc two-cylinder engine from the 500 last year. For towing, like many things in life except your midriff, there’s no substitute for cubic inches. So the good news is that this 500 comes with not two but four cylinders, and one with plenty more cubic inches – in fact almost 30 per cent more than the two-pot engine.

It’s really looking promising as a tow tug. Right, let’s have a look at the van.

The SunSeeker’s party trick is its shower/toilet combo. No need to wander up to the toilet block in the middle of the night or queue for a shower here. Unfortunately, we didn’t make full use of the Euro’s bathroom facilities, much to the relief of the nice people at Euro Caravans HQ.

The SunSeeker also has a kitchen, fridge, living area and two-person sleeping capacity.For a smidge under $50K, we have rustled up a brand-new towing tug and a ‘full-size’ caravan with shower/toilet, cooking facilities and 12V/240V power.

The plan – weeks in the making – for this test was to get an early start out of Sydney and head north to the NSW Central Coast, arriving before dusk. That was if there were no headwinds; in which case we may have ended up in Mittagong instead.

The SunSeeker at Tare weight has zero tow ball mass (TBM) or as caravanners call it around the campfire, ball load. So, at much more than 90km/h, the rig starts to party, only with all the wrong moves. The trick is to load up the caravan as, you know, you might actually do when you go caravanning.

So we installed the various paraphernalia that our photographer Mr Fehlberg insists on taking on these missions into the front boot. I had thought of asking Mr Fehlberg himself to volunteer to hop into the SunSeeker’s accommodating boot to beef up the TBM only to realise his willingness to take pictures might quickly evaporate.

With photography gear and the contents of our pockets, the glovebox and anything else of weight floating around, such as our shoes, all shoved into the front boot, the SunSeeker’s ball weight rose to about 25kg.

The Fiat and Euro combo then stopped dancing the conga; we could cruise at 100km/h and the rig was not lured into a tail wiggle by the trucks blowing by.

Shucking Sydney traffic – after a few hill starts accompanied by the waft of burning clutch material – we bustled our way up the M1 freeway at a steady 100km/h. The Fiat was clearly made for this; it hummed a cheery four-cylinder tune in fourth gear with the accelerator pedal plunged to about halfway down.

Then we arrived at the first hill, just past the Mooney Mooney bridge. The Fiat held a comfortable 60km/h as it dispatched the hill in the most scenic lane on this stretch of freeway, the right-hand one. While other road users looked pretty angry going past us on the left, we felt safe in the knowledge that speed is one of the greatest killers on our roads and we were boosting our chances of survival over those angry buffoons tearing past us.

You might think that we’ve taken the small, light and cheap caravanning theme a bit too far. But here is proof that a big vehicle and van is not the only way to go caravanning.