Vehicle Components’ (VC) experienced Remote Area Testing (RAT) team has just wound up another successful RAT Run. The RAT Run is an annual expedition to put VC’s Cruisemaster suspensions and Hitchmaster couplings through the hardship of travel over rough terrain, leaving behind nothing but dust.

The RAT Run is part of a continuous development program that VC has been undertaking since 2009. The program ensures the products VC brings to market have survived the torture of the harsh Australian outback and will last well in to the future.

The RAT team took to the road in the Vehicle Components’ LandCruiser 200 Series towing a 2.8t RAT trailer, and a Toyota Prado towing a 2t trailer. The trailers were equipped with VC’s new Cruisemaster ATX premium air suspension, the proven and popular Cruisemaster XT suspension, Hitchmaster DO35 couplings and a few other top-secret products that are still in development. 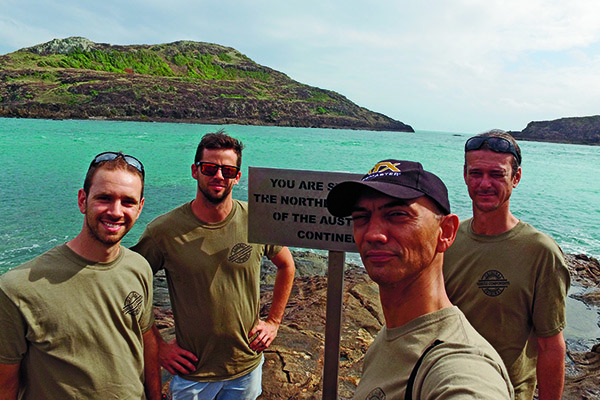 This year’s RAT Run saw the VC team venture north to tackle the infamous Old Telegraph Track (OTT) and Cape York Peninsula, before travelling across to Normanton via the Burke Development Road and back home via the dirt tracks of central Queensland. Vehicle Components has travelled to Cape York and across the Burke separately in previous years but, this year, they were combined to create the longest RAT Run yet. Here, the team tells its story...

After travelling an uneventful 1700km from Brisbane to Cairns, we pushed on to Musgrave. Travelling via the Atherton Tableland town of Mareeba and the tiny town of Laura, the road quickly turned to dirt with only intermittent surfaced sections. As an aside, Laura boasts only a few buildings but every two years, the town holds one of the biggest Indigenous events on Australia’s calendar – the Laura Aboriginal Dance and Cultural Festival.

Road conditions were generally very good, apart from a few short sections of medium corrugations. We were surprised to discover the amount of bitumen that had been laid since we were up that way last year and wondered how long it will be before the road to The Tip is all blacktop.

We use MoTeC data-logging equipment to monitor the suspension performance and log critical data that is used to improve and develop future VC products. The first easygoing legs of the trip allowed us to confirm that all the sensors were in working condition and logging data reliably.

We arrived at Musgrave Roadhouse well ahead of schedule, allowing us to set up camp well before the sun went down. This can be a rare luxury, as the long days of testing often lead to setting up the Oztents in the dark.

After a visual inspection of the vehicles and trailers, a brake and bearing adjustment, we were treated to Brayden’s pesto chicken dinner (proving engineers can cook) and a cold beer.

With little to no breeze around, the red dust hung on the road for ages. Every tree lining the road was covered in dust, their green leaves heavy with days of accumulated red dirt.

The roads around Bramwell Junction were a bit worse than the previous day and the sections of sealed road provided welcome relief from the shaking, noise and dust. Having made good time to that point, we pushed on to cover the Bamaga Road that bypasses the Old Telegraph Track.

There were heavy corrugations at the top end of the first bypass section and the shock absorbers were working hard; until, that is, we came upon the grader repairing the roads after the school holiday traffic.

We also stopped to check out a burnt out camper trailer along the road – somebody’s Cape York trip did not end well.

Returning to Bramwell Junction, we had the campground almost to ourselves, apart from a retired couple, a group of fishermen and one other group.

Before dinner, a puncture on the trailer had to be repaired along with a check that the wheel nuts were tight. We then finally sat down to a sensational steak followed by some gazing at the Milky Way.

Day one on the Old Telegraph Track started with a breakfast of bacon and eggs – essential foods for vehicle test teams.

Palm Creek did not disappoint, presenting the most challenging entry and exit on the OTT. Brayden did a great job getting the trailer through, assisted by the mighty 200 and its TJM winch.

No further recovery was required after that. It was slow-going, ensuring that no damage occurred to the vehicles and trailers. We were also conscious to minimise our impact on the track that winds its way through the many beautiful creeks and forests.

Stopping for lunch at the Dulhunty River, we safely descended Gunshot Creek and later set up camp near Sailor Creek.

The vehicles were rolling early and we headed to Fruit Bat Falls. If you need a bit of help waking up in the morning, head to Fruit Bat Falls and enjoy one of the best dips in Australia. The scenery, with surrounding waterfalls and the transparency of the water, is just breathtaking.

The RAT trailer developed an intermittent brake issue on the northern section of the OTT, and the ingress of water and dust in the trailer plug was later discovered to be the culprit.

We finished the OTT after a triumphant crossing of Nolans Creek and headed north to Punsand Bay after refilling food supplies in Bamaga.

REST DAY AT THE TIP

We stopped at Punsand Bay for a rest day, which started with a leisurely breakfast then a trek up to The Tip for the mandatory photos with the famous ‘northernmost point’ sign.

Back at camp, the trailer’s electrical plug was repaired, the bearings checked and all bolts torqued. A visual inspection was also conducted of the suspension and couplings.

Simon produced a prize-winning lunch of pulled pork and salad sandwiches, after which we headed to the Corrugation Bar to refill fluids and back up cameras and GoPros.

After the well-deserved rest day at The Tip, it was time to pack up and head back down to Musgrave. High hopes for more corrugated road quickly vanished as the graders had almost completed their dusty work.

After returning to Cairns to fix a shock absorber on the LC200 and refill the fridges, we headed out across the Burke Development Road into Normanton. This road must be one of the most remote in the country as it crosses from one side of the tip to the other. This is the sort of road where you need to be confident that your equipment is going to be reliable. Help could be many hours away.

After two days, we reached Normanton without incident and turned south, heading back to Brisbane, meandering through as many dirt roads as possible across central Queensland.

After 7000km the RAT Team arrived back in Brisbane, ready for the painstaking disassembly of all of the products to ensure they met the grade.