As you would know, most bedside wardrobes in caravans have space for hanging clothes. But is this the best use of space? Chris and Diane Hodgson, who CW met in 2014, fitted shelves to the wardrobes of their 2007 Jayco Sterling. Undoubtedly, this makes the space much more user-friendly. What do you think?

On the subject of wardrobes, you don’t have to fit permanent shelves to yours. Colin Tidey and Sharon Small wanted to improve the space efficiency of their Jayco Penguin, and  one of their ideas was to use a cupboard organiser in one of the small wardrobes.

We met Rob and Jill Doust of WA a couple of years ago when they showed us their 2011 Coromal. The couple had done lots of DIY modifications to their van, including this 100mm PVC annexe pole holder underneath the caravan. Why not fit it to the drawbar? Well, that was taken up by the dual 9kg gas cylinders. 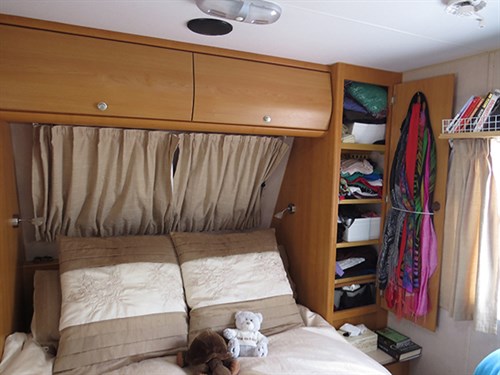 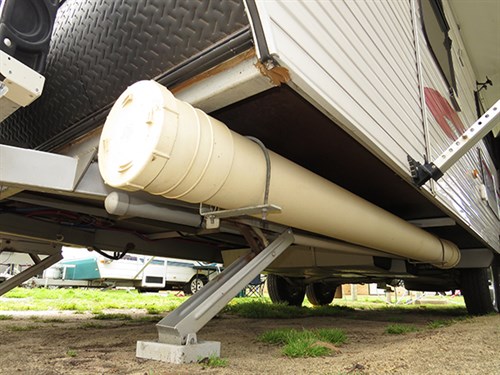 Okay, this isn’t a storage idea but it’s a terrific one nonetheless. The Dousts secured this water filtration system to an external bin. Any water that goes into the van’s two 90L tanks first passes through these filters.

A couple of years ago, we met a couple, Eric and Margaret Banham, who drilled a couple of metal channels to their van’s A-frame to hold their bikes when travelling. The bikes stood in the channels and were secured were with ratchet straps.

There’s no need to fork out for a special bag to hold your garbage when an old backpack can do the job. This one has been adapted to fit the van’s spare wheel.

Speaking of campsite garbage management, an old metal jerry can with the lid cut off and hinged in place works nicely as a portable rubbish bin. What’s more, it can be used to carry light, sealed food items, such as biscuits and pasta, on the way to camp.

Rob and Lindy Andrews of NSW did plenty of DIY modifications to their American-made fifth wheeler but this idea should translate to some caravans (depending on the layout, of course). Rob removed a shelf from elsewhere in the fifth wheeler and mounted it to the end of the kitchen bench with special hinges. Instant bench space!

The drawbar sure is versatile in its storage ability, but is this taking things too far? This rig has a box for a generator and a box for ropes and pegs, not to mention three 20L jerry cans and a 10L can for the generator fuel. Behind the jerry cans and gas cylinders is a satellite dish. Naturally, this all adds to the rig’s ball weight but it shows what can be done!

Don’t you hate it when the contents of your cupboards shift about during a transport leg of your journey? It happens to everyone. But here’s a novel way to keep everything in place. Save those old bladders from wine casks, blow them up to the necessary size, and stuff them into the cupboards around your items. A blown-up wine bladder makes a great space filler.