The humble cast iron skillet really is a do-it-all cooking appliance. Sure, they are heavy but they cook fantastically either on the stove or in the oven and, once they have been used a few times, they become seasoned and are almost foolproof.

These stovetop skillet recipes are very versatile and work equally well on a gas burner, barbecue, kitchen stove or even in the pan over an open fire. 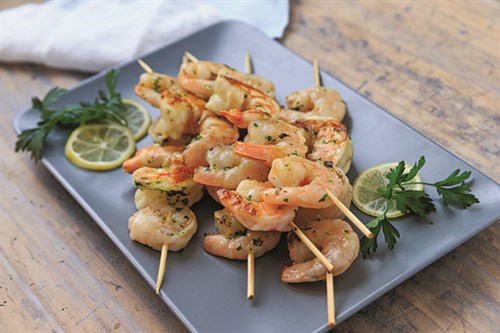 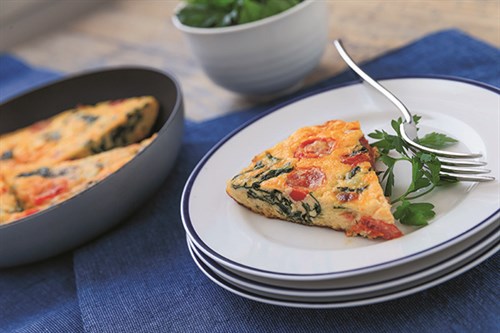 I like to mix it up and use three different sizes of prawns (such as tiger prawns, banana prawns and school prawns) when I make this recipe. However, you could also use a comparable total amount of the same-sized prawn if you prefer.

Preparation time: 15 minutes or so

The following quantities will serve four as an entree

Load the skewers with the prawns you have chosen to use and then place them in the fridge until you are ready to cook them.

Combine the remaining ingredients in a small bowl or jar for the basting sauce. Then, about half-an-hour before cooking the prawns, brush them generously with the sauce and then return them to the fridge until cooking time.

To cook the prawns, place the skillet over a medium heat. When the skillet is hot, place the prawn skewers onto the hot surface in a single layer. Brush the prawns again with the basting sauce and continue to do so during the cooking process.

Cook for a couple of minutes, then turn the prawn skewers over and cook on the other side, brushing again with the sauce.

To serve, place the skewers on a plate and brush once more with the sauce.

Frittatas are an egg-based dish, which could alternatively be described as either a crustless quiche, or a thick omelette that hasn’t been folded.

The following quantities will serve four

In a bowl, whisk together the eggs, cream and milk. Add the cheese to the mixture in the bowl, stir and then place to one side.

Heat a 25cm diameter skillet over a medium heat. Add the olive oil and then the halved cherry tomatoes. Saute until the tomatoes have softened and then add the spinach leaves. Stir together. Continue to cook until the spinach has wilted slightly. Add the bacon at this point if you have chosen to include it.

Pour the egg mixture over the tomato and spinach mixture and cook until the surface of the frittata has nearly set.

You can then either carefully flip the frittata over or flip it into a second skillet to continue to cook for a few more minutes on the other side. Alternatively, you can place the frittata under a medium grill for a few minutes until the top has set.

To serve, run a butter knife around and under the edge of the frittata and then cut it into wedges. The frittata makes an excellent meal served alongside a green salad.

In this recipe, the gingery mixture which is sprinkled over the cooked fruit is sautéed to a crispy crumble in a skillet pan and then placed to one side while the fruit is cooked.

Prepare the crumble first. In a skillet, heat the butter over a medium-low heat. When the butter has melted, add the crumbled biscuits, sugar and ginger. Stir together well and continue to cook until the mixture is crumbly and crispy. Then set the crumble aside in a bowl while you prepare the fruit.

To prepare the fruit, using the same skillet in which you prepared the crumble (you may like to wipe it out with some paper towel first), heat the tablespoon of butter over a medium-high heat. Add the pear halves to the pan, cut side down, and cook them until the pears start to release their juices and turn golden. Turn the pears over and reduce to medium-low heat. Fill the cavities of the pears with a drizzle of honey and continue to cook until the pears soften but still hold their shape.

To serve, scoop the golden pears to serving plates and sprinkle generously with the prepared crumble.

The full feature appeared in Caravan World #551 May 2016. Subscribe today for the latest caravan reviews and news every month!