Humble and simple leaf springs have been – and still are – under the majority of new caravans and trailers sold in Australia to the present day. I must emphasise ‘present day’ because the balance is shifting in favour of trailing arm independent systems which usually, but not always, employ coil springs and telescopic shock absorbers to control wheel movement.

So why the change, when most experts agree that leaf springs and a beam axle connecting opposite wheels is all you need on a towed trailer on smooth, sealed roads?

The indisputable fact is that, in recent years, more Australians are going further afield in larger, better-equipped and, as a consequence, usually heavier, caravans. This means that all the components, from the chassis to the body frame, cupboard hinges and drawer runners, get a harder time than in the past. 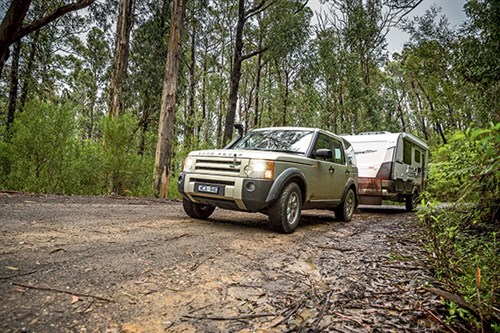 Australian caravan manufacturers have encouraged this by offering ‘offroad’ variants of normal touring models, with larger diameter chassis members, plenty of checkerplate cladding and so on. But, until recently, only the most serious came equipped as standard with trailing arm coil spring independent suspension systems like Vehicle Components’ Cruisemaster and G&S Chassis’ Control Rider.

Then Jayco, which has around 44 per cent of the Australian caravan and camper market, threw a cat among the pigeons in early 2014 when it launched its locally designed and built JTECH trailing arm independent suspension as standard equipment on all Silverline and Outback-optioned models.

Queensland’s Vehicle Components was ready for the rush towards independent suspension with its new CRS (Country Road Suspension). However, as Jayco rolled out JTECH, one of the industry’s largest component suppliers Al-Ko was still developing and selling proven leaf spring and rubber torsion systems. But, within months, Al-Ko had a new trailing arm independent suspension on the drawing board. As the Australian arm of the world’s largest supplier of RV suspension systems, it simply couldn’t ignore the 50-odd per cent of the Australian caravan and camper market that Jayco doesn’t supply.

The result was Al-Ko Enduro Outback – a heavy-duty, fully-adjustable system rated up to 4.1t – initially introduced in October 2015 and now joined this year by the lighter-duty Enduro Cross Country variant, which is designed to be fitted instead of leaf springs under caravans and campers designed for mostly on-road travel.

We reviewed the Enduro Outback system, which is now factory-fitted to all Golf Savannah caravans that come out of Avan’s factory in Pakenham, Vic. It’s a good fit, as all Golf models (caravans and camper trailers) are rated offroad to distinguish them from their Avan brethren.

The Enduro Outback system fit the single-axle Savannah 499 like a glove. It is very compact, with its Queensland-made King Springs coils, made from high stress K5 steel, nestling in their own cradles on the triangulated trailing arms, while the system’s twin telescopic shock absorbers (made in Al-Ko’s plant in Spain) control vertical wheel movement.

It is interesting to note not just how aware the market has become of independent suspension systems in just a few short years, but also buyers’ expectations.
Twin shockers per wheel are now the expectation – even on tandem systems where, in most cases, single large-case shocks per wheel would be enough – so Al-Ko offers the option of single or twin shocks.

The coil springs are painted red, just for looks, and chassis makers placing large orders – like Avan – can have the top of the shock absorbers painted red to match. It’s all pretty irrelevant on an offroader, where stones and dust will soon dull the shine and shot peen any suspension system but, hey, it looks great at caravan shows and on the caravan lot!
While the shocks come from Spain, the entire system was designed and developed in Australia for local conditions and involved extensive endurance testing at the Australian Automotive research Centre in Anglesea, Vic.

I don’t think the Outback system is as ‘meaty’-looking as the heavy-duty, offroad systems from VC, G&S and, more recently, Simplicity, but keeping unsprung weight as low as possible is a point of difference in its favour. This was particularly impressive on the full-height Golf Savannah 499, which had a modest Tare weight of just 1680kg for its size and features.

One important reason for choosing a trailing arm independent setup for offroad use is the extra ground clearance these systems provide and, here, the Enduro Outback excels. The Golf’s chassis design, with its 150x50mm A-frame that ends well under the van, allows the suspension to be tucked neatly under the body and delivers excellent ground clearance. The van doesn’t look as if it is perched on its suspension as some other offroad caravans do.

Without 50 per cent more wheel travel and the absence of the beam axle of a conventional leaf-spring system, the Golf was able to travel fairly rough terrain without fear of underbody damage, with the exception of its extremely low-slung galvanised steel door step that should be the first thing you unbolt when you take delivery – if it doesn’t get knocked off first!

Watching the suspension at work retrospectively, through the lens of our GoPro camera, showed just how well an independent setup deals with uneven surfaces, with the body of the Golf remaining impressively steady when negotiating badly potholed roads.

We often see mattresses and other items move around inside review vans, even on bumpy bitumen but, other than the window pelmets being dislodged from their inadequate Velcro mounts, an inspection of the Golf’s interior after a particularly nasty section of alpine road showed that the interior and its fittings had been left unmoved by the experience.
Bone-shaking corrugations of the sort you find on major outback roads are where independent trailing arm suspensions really earn their money and this is where the Al-Ko system excels over leaf springs.

The problem with leaf or rubber suspension springs on lightweight vans is that, being stiffly sprung, they tend to ‘skip’ on these surfaces, as the springs and shock absorbers cannot respond quickly enough to the demands being placed on them. And if the road is crowned, as many remote area roads are to improve drainage, the van will skip sideways, particularly on corners.

This was not an issue with the Savannah 499 which, despite its modest length, behaves like a much bigger and heavier caravan on these roads.

The other challenge facing caravan manufacturers today is that buyers have been seduced into not only wanting to go further afield with their caravans, but to take more in them. Full separate shower and toilet ensuites with built-in laundries, extra batteries, multiple rooftop solar panels, slide-out kitchens and barbecues, plus onboard generators and hatches to carry them all take their toll, and most large offroaders today start with a Tare weight well above 2500kg.

Factor in stiffer springing to accommodate this load on rough roads and tyre pressures as high as 65-70psi and you can imagine the loads imposed on such rigs on bad corrugations. With the promise of a softer, more compliant ride, it’s little wonder that people are turning to independent trailing arm coil spring or trailing arm airbag systems even for ‘gravel roaders’.

Of course, there’s no such thing as a free lunch and Al-Ko Enduro Outback costs a caravan manufacturer about double that of a similarly-rated leaf spring system to fit – a cost that will be reflected in the price you pay for the vehicle it is fitted to, although great take-up by the market will no doubt see a price reduction based on volume.

The full feature appeared in Caravan World #552 July 2016. Subscribe today for the latest caravan reviews and news every month!