Cooking on the Road

Caravan World editor Max Taylor and I were talking the other day about road trip recipes and the food you carry when you are cooking on the road. I suggested that even if you were well-equipped with caravan cooling and freezing accessories, it would be wise to keep a few non-perishable food items that could be quickly and easily prepared.

Indeed, I had heard about a fella who took McDonald’s cheeseburgers into the bush. He reckoned that with all of the preservatives, they never went off! But for those of us who prefer something a bit more wholesome, road trip food is a major component of our travelling budget, particularly when there is a family to feed. Anyone with youngins knows how hard it is to come up with good recipes for kids – especially when you’re on the road.

So the challenge was set. What good budget camp cooking ideas could we come up with that could feed an entire family? I was about to prove that you can prepare a meal for a family of four and spend under $20. It also had to meet the following criteria. Namely, it had to: 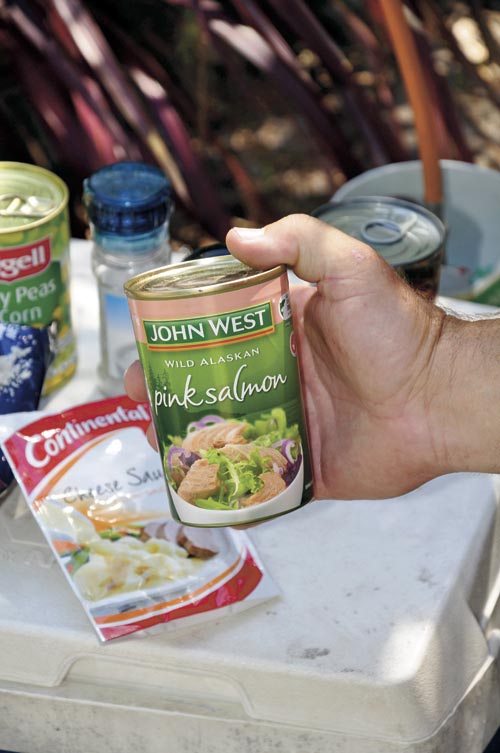 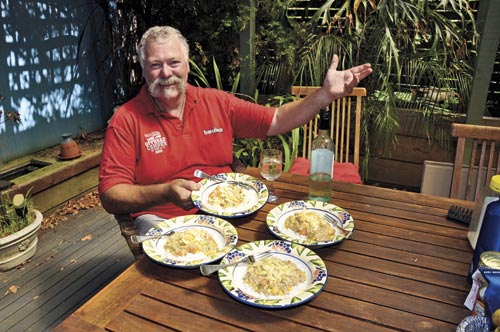 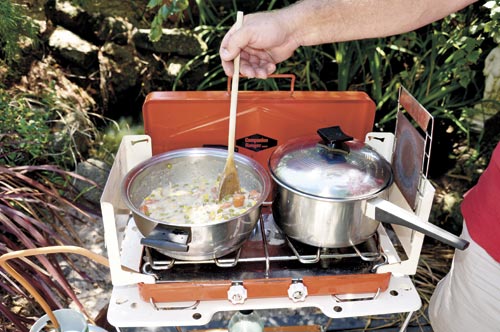 Stoosh was the answer! Stoosh is my mum’s name for a tuna or salmon mornay. It’s generally served with rice but sometimes pasta – whatever you’ve got! Personally, I prefer brown rice but it takes more water and time to cook. Speed is of the essence, especially when the tribe is hungry after a long day on the road, so white will do.

When I was done I produced the meal for well under $20 and I had plenty left over for a nice bottle of white wine. You can put a splash of the wine in the mixture, too.

All this for under $20. In fact, there was enough left over to include a nice Cleanskin Marlborough sauvignon blanc.

White rice could not be easier. Place about one and a half cups of white rice in a saucepan. Cover with cold water to a level 10-12mm above the rice. Bring to the boil, lower the heat, stir and boil gently for a minute or two. Put the lid firmly on the saucepan and leave it for around eight minutes. Open the lid and stir the rice with a fork to fluff it up. Replace the lid for a further two minutes, or until you are ready to serve. This method actually steams the rice more so than boiling it, and the water should all be absorbed, producing light fluffy rice that is ready to serve.

You can cook or steam the rice.

This is even easier than the rice! Boil 250ml (about one cup) of water in a saucepan, or a frying pan if you are short on pans. Pour in the packet of cheese sauce mix and stir with a fork, eliminating the lumps. If you are making this at home, you could do a genuine cheese sauce with flour, milk, butter and cheese instead.

Bring down the heat and stir in half of the can of carrots, peas and corn, and the canned fish. This can be either salmon or tuna to taste. Fresh Tasmanian salmon, pre-grilled, tastes even better if you can get it!

Season to taste and add a splash of wine if you wish. If you have it, add some Parmesan, chillies, cayenne pepper, leek, spring onion or anything else that takes your fancy!

Simply heat it through and serve on a bed of rice. For a bit of extra taste, crumble a small handful of potato chips over the top – the kids love the crunch, and so do I!

Cooking time is 15 minutes, and that’s allowing a couple of minutes for refreshment stops in between!

If you want desert as well, eliminate the chips and cook some sweetened pancakes topped with canned fruit (two fruits or fruit salad work well). Pancake mixture, UHT milk and a can of fruit will only set you back a few dollars. You will still be under twenty bucks and have that bottle of wine to wash it down!

You can use either tuna or salmon.

With this budget road trip recipe Bear fed his family for less than $20 and still had enough left for a nice bottle of white!