Someone once said ‘the family that meals together, deals together’. Or something like that. Whatever the actual wording, the point of the expression – that families which spend time together become closer – is absolutely true. Ask anyone who has taken their kids on a big trip. They’ll tell you the sense of achievement in overcoming the little obstacles of day-to-day touring only forges stronger ties. When vanning with the family, the amazing sights you’ll see along the way are secondary to the way it draws you closer. The shared experiences, things you’ll forever have in common with your children, are a kind of glue.

Watching as Jasmine took the first proper, confident steps of her young life in Coober Pedy will never be forgotten. And seeing her older brother Ethan effortlessly conquer many of Kakadu’s difficult hikes was, though bittersweet, when we truly realised he was growing up.

There’s no science or art to family caravanning. You could simply pack the kids in the car, hitch up, head off, and have an adventure worthy of telling the grandchildren. I suppose that’s the ‘romantic’ approach, though. In truth, you’ll have an even better tale for those little ears if you heed some advice from those who have done it before. 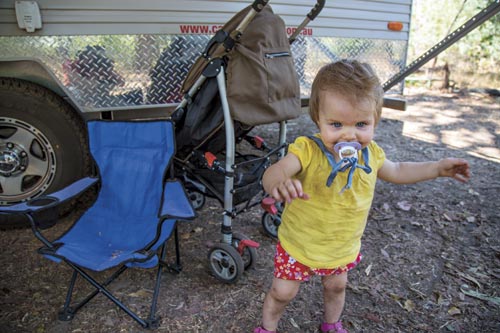 “You’ll be at each other’s throats by the end of it,” a mate assured me the day before we departed for Kakadu.

I didn’t think so. We’d done some big trips before and knew living together within the relatively confined space of a caravan for four weeks, not to mention all that time in the 4WD, would present a few challenges. But we also knew they could be easily overcome by good planning.

Our kids’ behaviour declines in direct proportion to the amount of sugar they consume, which can make things pretty unpleasant. But when you’re in the outback, healthy snacks aren’t available at each and every roadhouse. On the way north to Kakadu, therefore, it was important that we stocked up at the major towns: Port Augusta, Coober Pedy, Alice Springs, Tennant Creek and Katherine. The alternative – to feed the kids exclusively from roadhouse pie warmers and ice cream freezers – would’ve given us what we would’ve deserved: screaming children and an afternoon sugar crash.

Come dinnertime, especially after a long day on the road, thermo-cookers are worth their weight in gold. Personally, we’d never leave home without our Dream-Pot again. Taking the time in the morning to prepare the ingredients in the pot and heat it on the stove for a few minutes, which is essentially all you have to do with the Dream-Pot, will ensure everyone gets a healthy meal at the caravan’s dinette in the evening. Mixed frozen veggies tossed through any pasta dish is also an easy way to get some nutrition into the kids.

If you think travelling 1000km a day with a couple of young kids is a good idea, take it from me – it isn’t. Family caravanning is about enjoying time with one another, not racing against the clock for the sake of keeping an unrealistic schedule. There are bound to be obstacles that’ll throw you off track anyway, so flexibility is paramount. Clinging for dear life
to an itinerary will only stress you, and everybody else, out.

Make an effort to stop once in a while, even if you don’t think the kids need it. This country is dotted with charming rural towns, each with their own character and usually with their own tourism drawcard, from Big Lizzie in Red Cliffs, Vic, to the submarine in Holbrook, NSW. All rural towns have a story worth telling, and most have a terrific bakery to boot.

When all else fails, as it will now and again, a financial penalty might do the trick. I’m serious. At the start of our trip, Ethan was given a $20 note. It was his responsibility to keep it safe until we reached Kakadu, where he could spend it however he liked. But if his behaviour took a turn for the difficult, we’d ‘fine’ him a dollar or two and he’d have to earn the money back through good behaviour. Simple and effective.

For a parent, is there anything better than waking up to the sound of your children playing together? Or listening as they giggle at each other from their bunks when they should be going to sleep? I don’t think so.

At home, everybody in the family has their own space; in a van, it’s shared. Kids rediscover old games and remember that playing with each other is much more fun than playing a Wii.

Sharing a relatively small space takes more than cooperation, however. Organisation is equally important. Remember to put the toys in an easily-accessible location, a place the kids can reach themselves. Consider making lunches, etc., the night before if the following day will be spent on the road. That way, the morning can be spent wrangling the kids and hitching up, and negates the temptation to buy an unhealthy lunch during one of your fuel stops.

Fill up the tanks with water before leaving the campsite, if possible, particularly if yours is an outback adventure. Do this even if it’s unfiltered bore water that you’ll only use for washing the dishes. We bought several 10L casks of drinking water which we decanted into reusable bottles each morning, and more than once we were caught short for washing up water. It was such a shame to use clean – and expensive – drinking water on breakfast bowls. (I lobbied for disposable plates and cutlery but that would’ve added to our garbage quotient, my wife rebuked. I maintain they’re worth considering in areas where water is in short supply. Sorry, darling.)

By the time we reached Kakadu, we had established a routine that made life on the road with a couple of young kids pretty easy.

If you’ve never done it, don’t put it off until your kids are older. As the grey nomad parked next to us at the Daly Waters van park said when he saw Ethan helping me hitch up: “Get ’em while they’re young!”