FOR MOST RVERS, the fridge they use the most as they travel will be the big one in their van. But there are plenty of times when portable refrigeration comes in handy, like when you’re enjoying happy hour away from the van.

Portable fridges and coolers all tend to look much the same from the outside – they’re all insulated boxes with lids – but there are significant differences in the way they work and the type of energy they use. It’s necessary to know something about the ebbs and flows of the cooling business if you want to be sure of buying the right unit for your needs.

Here we take a look at five portable refrigeration options.

The simplest and (by far) cheapest type of cooler is the faithful Esky; an insulated box with an insulated lid, which you fill with ice you have purchased elsewhere. When you buy bagged ice, you’re essentially buying a slug of pre-packaged refrigeration.

We’ve been checking these units for their insulating quality over many years and Coleman and Esky units, while relatively expensive, consistently do better than most others, keeping contents cool for several days, even in high ambient temperatures.

There is an increasing number of thermoelectric cooler boxes on the market, filling the price gap between an Esky and a true fridge.

Thermoelectric coolers employ an effect that occurs between two closely-coupled, but dissimilar, materials. When an electrical current is passed through the materials a temperature variation occurs and can be switched to create heat or cooling inside a container.

Unlike true fridges, which can achieve a target internal temperature, thermoelectric coolers are rated to achieve a cooling effect in relation to the ambient temperature. Claims regarding their performance usually quote an internal temperature of ‘22°C below ambient’, or similar. In that respect, they’re not reliable for storing temperature-critical contents.

However, the thermoelectric effect works both ways, so these units can be set to heat their contents, up to temperatures of around 65°C.

At this stage of development, thermoelectric coolers work as a compact means of cooling or heating non-critical consumables. They’re not especially efficient, with current draws of around 4-5A, or in the same province as compressor-type ‘real’ fridges.

But they’re cheap, they have no moving parts and some are specifically designed for car-seat stowage, with integrated seat-belt mouldings. Some can even work as a centre-seat armrest.

The most popular form of portable refrigeration is the compressor-type fridge. The best-known brands are Waeco and Engel, and both employ the same refrigeration principle, but with different types of compressors.

The principle of these units is simple enough: the fridge piping contains a gas that liquefies at low temperatures. This gas is then pressurised through fan-cooled condenser coils located outside the food-storage area. As the gas sheds its heat through the coils it condenses into liquid, still under pressure, and is forced through a small expansion valve and into a low-pressure area created by the suction effect of the compressor. This action causes the liquid to vapourise and drop its temperature to around -25°C.

The compressor suction pulls this cold gas through the evaporator coils inside the food-storage area, lowering the temperature of the contents and warming the gas, which then passes through the compressor and the cycle continues.

Portable compressor-type fridges are 12V/240V-compatible, which means they can run off a car power outlet, inverter or mains plug.

Waeco, like most compressor-type fridges, uses a reciprocating compressor, while Engel has a swing motor.

A compressor fridge can run off car alternator power while the vehicle is being driven, but it needs auxiliary electrical power when the engine is off. A deep-cycle auxiliary battery is a common source of 12V power and can normally power a fridge for between one and three days without re-charging, depending on ambient temperature, battery capacity, and required temperature. A solar panel can run a deep-cycle battery for a fridge when sunlight is available, or it can be powered at any time by a generator.

It should also be noted these compressor fridges need to periodically cycle on and off, which can be seen as an advantage in that it uses less power and allows the compressor to rest, and a disadvantage because it means power needs to be available 24 hours a day and the fridge can’t be turned off overnight. 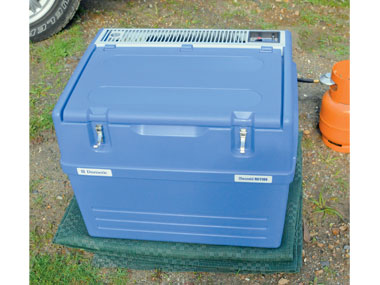 Eutectic, or ice bank, fridges employ the compressor refrigeration cycle, but add a significant component: rather than evaporator coils being inside the food compartment, they’re housed in a tank surrounding it. There is a liquid inside the tank that freezes as a result of the refrigeration cycle, and this external ice bank is what cools the contents of the food-storage area.

A eutectic fridge can operate via the car’s alternator power when the engine is running and, in the case of an overnight stop, won’t need to operate again until the car starts up next morning, which means there is no mechanism cutting in and out during the night (as you get with the compressor fridges). The ice bank keeps the contents cold in the meantime.

As with a straight compressor-type fridge, a eutectic unit can function as a freezer or a combination fridge/freezer.

Our real-world testing has shown a eutectic fridge uses less electrical power when working on the same cooling duty-cycle as a compressor fridge. However, you get what you pay for and a eutectic fridge costs a lot more than a conventional portable fridge, and is also much heavier.

An absorption-type fridge uses heat energy, rather than an electrically-operated compressor, to pump refrigerant around the system. As the name suggests, the refrigerant is released from solution and absorbed again during the process.

Heat is sourced from 12V, 240V or LPG supply and used to raise the temperature of a strong ammonia/water solution, so most of the ammonia evaporates. The solution passes through a fan-cooled condenser, where it liquefies and passes through a restrictor that causes it to evaporate. This action cools the gas as it passes through tubes in the food-storage area, drawing heat from the contents.

The warmed gases then flow into an absorber, filled with the weak ammonia solution, where they’re absorbed, forming a strong solution once more before the cycle repeats.

Absorption fridges aren’t as energy-efficient as compressor-types, but they do have other advantages including their silence, and their ability to operate on 12V, 240V and gas.

However, our experience over many years of travel is that 12V operation is much less efficient than 240V or gas. This is because electrical energy is used least efficiently in a radiant-heat application – the heating element for an absorption fridge – but is more than 90 per cent efficient when powering an electric motor, such as a fridge compressor.

In order to supply current for an absorption-type portable fridge in a vehicle, it’s necessary to have a powerful alternator and guaranteed 12V power delivery around 10A – a compressor fridge draws about half that. An alternative is to run it via a 240V inverter, but you’ll still need plenty of electrical grunt.

Those who go offroading over steep or uneven ground may find absorption portable fridges don’t work very well en route. This is because these units operate optimally on a level, or almost level, surface.

As with compressor-types, an absorption fridge can function as a freezer, or a fridge/freezer combo. But very high ambient temperature can upset the absorption-cycle efficiency.