WHENEVER A BUNCH OF vintage caravans get together, everyone comes around to have a look at these amazing relics from a bygone era. They are like time machines taking you back to a simpler world, when family caravanning holidays didn’t have to deal with questions like mobile internet connections, games rooms and social activity programs.

But the difference between old and new is most obvious when you look at teardrop caravans. There are usually a few of them at vintage van get-togethers and they always get a lot of attention from onlookers. That’s partly because they are small and cute, but also because they are so unlike modern mass-market caravans.

Tearjerkers, as they are often called, are basically a trailer with a double bed filling the tray, a curved roof over the top, and an open-air kitchen tucked away in the rear hatch. They are ultra-tiny and ultra-light because they came from an era when most cars didn’t have a lot of towing capacity. 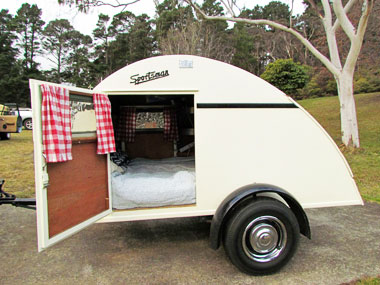 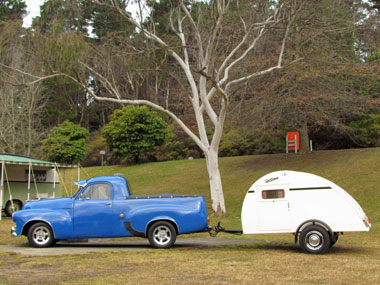 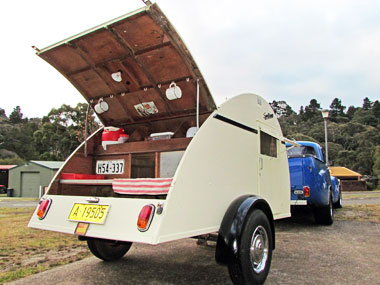 TEARDROPS were popular as DIY caravan building projects in the mid-20th century, precisely because they are relatively small. But there were commercially-built teardrops as well. The one shown here is a 1950s Sportsman teardrop, which belongs to Maurie Cole of Sydney.

Maurie also has a larger vintage van for family holidays, but uses the teardrop when he travels alone. “I wanted to keep the Sportsman fairly original, so I repainted it in a 1950s style off-white," Maurie explains. "I
left the interior woodwork unpainted, and resisted the temptation to line the interior. It just has the outer plywood layer, so it can get a bit nippy inside on a cool night.”

Maurie has a particular soft spot for FX and FJ Holdens
because, he says, "I just love the curves." Yes, it’s easy to see why he might like teardrop caravans then, too.