JUST LEFT OF Australia’s centre, a remote ribbon of red dirt provides a surprisingly beautiful shortcut between tourist hotspots Kalgoorlie, WA, and Uluru, across the NT border. Stretching 1400km and occupying travellers for around four or five days, this outback route sets out from Lake Ballard, in WA’s Goldfields-Esperance region, and follows the Great Central Road across Australia’s largest desert.

Across the NT border, the marginally bumpier ride follows Tjukaruru Road to Lasseter’s Cave before the landscape suddenly rises and Kata Tjuta and Uluru loom on the eastern horizon.

Despite some corrugated and dusty sections, the graded roads are suitable for conventional vehicles and caravans with (just) enough clearance to cross the occasional water-filled causeway. And, surprisingly for such remote locations, there are plenty of roadhouses providing powered campsites with full amenities, drinking water and meals, as well as remarkably pricey fuel.

But it’s the lonely bush camps, where you can stretch out around a campfire as the stars appear and the dingoes begin to howl, that really make this a trip worth taking. 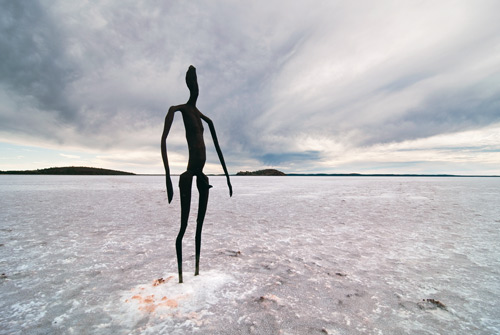 From the west, the adventure begins on the shores of Lake Ballard, a vast saltpan that artist Antony Gormley chose as his outdoor canvas when he created Inside Australia back in 2003. Gormley’s 51 solitary, spirit-like figures beckon walkers out onto shimmering white salt flats that extend for 50km, and up windblown islands of ironstone to watch the sun rise and set.

The allure of Lake Ballard lies in the pairing of intriguing artwork and a strikingly beautiful landscape. The lake’s great campground, stretched along a gypsum dune on the lake’s edge, is an added bonus for travellers in this remote spot.

Shaded by mulga woodland, the free bush camp provides space for about a dozen rigs and has good facilities: wheelchair-accessible toilets, drinking water, picnic tables, firepits, a dump point and several bins. The camp lies around 300m from the lake’s entrance where a shelter with interpretive signage helps you learn more about the sculptures.

Based on real-life locals from the nearby town of Menzies – who were laser scanned for the project – the sculptures are cast from a stainless steel alloy that resembles volcanic rock, and positioned over 10 sq km of the lake. You should allow a couple of hours to explore the installation, crisscrossing the lake from one sculpture to the next in the footprints of emus and dingoes. Climbing down the small knoll near camp at dusk rewards with expansive views.

Lake Ballard is signposted off Goldfields Highway, 57km from Menzies, where you can pick up fuel and supplies. You would also be well advised to gather firewood before arriving at the sparsely vegetated lake.

It’s only 170km from Lake Ballard to Malcolm Dam which, depending on your itinerary, might make for an excellent spot to break for a cuppa or a nice quiet camping spot for the night. The dam is signposted 10km east of Leonora, the last place to pick up reasonably priced fuel, which continues to increase all the way to Alice Springs.

Originally a soak that was expanded in the early 1900s to supply water to the nearby railway, Malcolm Dam is now a popular fishing and swimming spot that permits camping. Facilities are limited to picnic shelters and a boat ramp, but there is plenty of flat ground for self-contained vans and big rigs. Pets are also welcome.

Deeper than other surrounding waterholes, Malcolm Dam stays full much longer into the dry season, attracting the region’s black swans, grey herons and pelicans, and offering catches of bream, carp and spangled perch.

Where the bitumen ends beyond Laverton, the Great Central Road begins its journey across a red sand desert that rates as Australia’s largest. Measuring 424,400 sq km, the Great Victoria Desert balances sand hills and ancient salty lakes on a bedrock of Yilgarn Block – granite, gneiss and greenstone that, at 250 million years old, represent some of the oldest rocks on earth.

But what most stimulates the imagination of travellers are the colourfully painted breakaways that crumble on the edge of the desert plateau. These flat-topped, free-standing mesas and canyons are striped with yellow and soft white clay sandstone and rusty red lateritic soils, and paint the desert in earthy ochre tones that dazzle under the shifting spectrum of a setting sun. One of the best places to spot them is at Giles (Jindalee) Breakaway, a scenic rest area and camp located 56km north-east of Laverton.

For signs of life in the desert, visit nearby Deba Gnamma Hole, where water gathers on rock depressions to sustain wildlife throughout the dry season – dingoes, kangaroos and vast, colourful flocks of iridescent green budgies.

There are estimated to be more than one million camels roaming Central Australia, and we encountered a great many of them: solitary souls that stopped in their tracks while we gawked at each other, and large herds that casually crossed the road in front of us.

Spread across the 564km of mulga and spinifex scrub between Laverton and Warburton, there is no shortage of basic rest areas for campers. Limestone Well and Minnie Creek Road rest areas (200km and 197km west of Tjukayirla Roadhouse, respectively) are pet-friendly spots that provide shade and space for big rigs, while Camp Paradise and Manunda Rockhole (92km and 122km east of the roadhouse) are also great places to stop.

Tjukayirla Roadhouse itself offers powered sites for $25 per night ($15 for unpowered), and provides a camp kitchen, free gas barbecues and meals. Kids and dogs stay for free.>

West of Tjukayirla Roadhouse, you can’t miss the enormous white cross erected on the hillside by Aboriginal Christians in 1991 that marks the location of some rock art caves. Eroded into the edge of the escarpment, the small caves are easily accessed via short pathways through the spinifex. Approaching Warburton, the road deteriorated into bone-rattling corrugations and we were plagued by flies spurred on by the heavy rains that had obviously thwarted the graders.

More annoying than the flies, however, was Warburton’s diesel price – a whopping $2.45 per litre – easily the most expensive on our trip. Although we were carrying a few jerry cans, we had to fork out for a top-up. If you can manage it, you’ll find cheaper diesel 239km east at Warakurna ($2.30 per litre on our trip) and at Yulara across the NT border ($1.82).

But if it’s time for power and a shower, the campsites out the back of the Warburton Roadhouse are well priced at $12 per person per night (no pets).

While the corrugations remain bumpy as you approach the NT border, the abruptly changing landscape provides a great distraction. Rising dramatically to the north and east, the rusty red peaks of the Rawlinson Range and Schwerin Mural Crescent create a dramatic and colourful spectacle at sunset.

Detouring along a dirt track towards the rock, we found a flat camp at the base of Schwerin Mural Crescent, where we collected a mound of fallen timber and kicked back beside the campfire as an outback orchestra of dingo howls, bird calls and fire crackle warmed up the night. With the exception of the stealthy dingo, whose footprints revealed a night time visit, we were blissfully alone under a starry sky.

Although the location of Harold Lasseter’s reef of gold remains a mystery, the cave where this infamous outback character spent his final days is signposted off Tjukaruru Road, 40km east of Docker River on the NT border.

In January 1931, while on an expedition to rediscover the reef he claimed he found back in 1897, Lasseter’s luck ran out near the Hull River. After his camels bolted, leaving him stranded without food, a severely weakened Lasseter sheltered, starving, for about 25 days in a small riverside cave.

When he finally set out to walk east to the Olgas (Kata Tjuta), he covered just 55km before dying. Much speculation still abounds about whether Lasseter’s lost reef ever really existed, but the story continues to ignite the imaginations of outback wanderers.

Soon after Kata Tjuta appears on the horizon, the silence as wheels glide onto bitumen is as startlingly as the steady stream of squeaky-clean tourist traffic. An additional perk in reaching this famous destination from the west is that you avoid the national park’s toll gate – and its entrance fee of $25 per person.

Arrive at the park early and you can spend a full day walking the trails, discovering lookouts and visiting the cultural centre where you can grab lunch, cold drinks or a coffee.

Highly recommended for its inspiring lookouts, the Valley of the Winds trail at Kata Tjuta winds a breathtaking path between soaring sandstone walls and weathered red rock monoliths that tower 200m above nearby Uluru (7km/two hours). An easier alternative for the less energetic is the nearby Walga Gorge Walk (2.6km/45 minutes). At Uluru, the easy Base Walk is a popular choice for those who prefer to stay grounded, leading to rock caves layered with art and seasonal waterholes (9.4km/three hours).

First-time visitors to Uluru-Kata Tjuta National Park will probably want to overnight at Yulara and spend a few days exploring. But for return travellers, Alice Springs lies a smooth five-hour drive away.