How to protect your tow vehicle underbelly

HAVE YOU EVER crawled under your 4WD to have a look at the damage it suffers down there? The gouges you might find in the gearbox and transfer case, the dents in the sump, the deep scratches in the crossmember, even the craters in the rear shocks are sometimes scary. You wouldn’t want to be anywhere near it when you’re travelling through gibber country or negotiating the rocks in a creek crossing.

When it comes to rough-road caravanning, its one thing to have the underside of the van protected – the proper ‘offroad’ vans have that done when they’re being built – but it is another matter entirely to have your 4WD tow tug similarly protected.

Those who play hard in their 4WDs wouldn’t live without underneath ‘bash plates’, but they’re great insurance for offroad touring as well. While the risk is certainly lower when you’re not looking for hardcore challenges, Australia is – quite literally – a hard place and it will rip into your 4WD’s underbelly without mercy if you give it even half a chance. 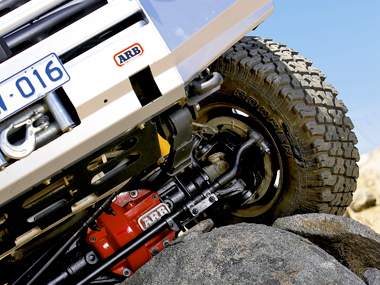 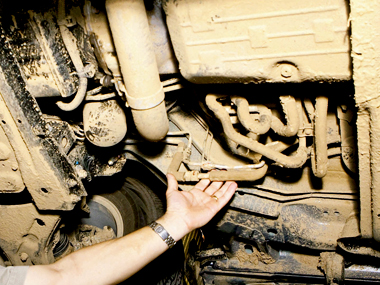 Many 4WDs have underbody protection built-in, but it rarely covers everything. Crossmembers on the chassis may be strategically placed to protect gearboxes, for example. And it’s not uncommon to find one or two bash plates fitted, especially right up front at the first point of contact. If you’re lucky, these plates may even be steel, although plastic seems to be the favourite token gesture these days.

Plastic is not too bad; it will still deflect flying stones, an undeniable benefit. It also goes a tiny way to preventing damage when you strike an immovable object. But steel is the way to go.

Factory-fitted steel plates are rarely as thick as 2mm (often little more than 1mm), and that’s probably all a typical touring 4WD tow vehicle needs, so replacing these is generally a waste of money.

However, if you know you will need the best protection – or simply feel that it’s better to be safe than sorry – you’ll find most aftermarket bash plates start at 3mm in thickness. That’s pretty solid – and also heavy. We all know that just about everything we do to our vehicles involves compromise, and in this case it’s weight.

Unfortunately, you won’t find the weight of aftermarket bash plates quoted in the brochures, but it’s not unusual to end up bolting 20kg under your car, and a large vehicle with full protection may end up with an extra 50kg or more of metal underneath. This all eats into your cargo capacity (and GCM).

Weight is not the only fact to consider. Bash plates can affect the flow of air required for cooling your engine or transmission, so make sure ventilation holes are included if they will block airflow to coolers on your vehicle. Avoid protection plates that cover sump plugs, oil filters and anything else your mechanic has to reach when servicing your 4WD, because otherwise you’ll be up for extra labour charges as the mechanic removes and replaces the plates.

Well-designed plates will also clear standard tow hooks and recovery points, although you can’t expect them to allow for other aftermarket add-ons, and if you find a conflict you’ll have to sort out your own solution. Grass, mud and stones can also build up between the plates and the vehicle: too much dried grass will lead to a major fire hazard; stones jammed in there may rub through the parts you’re trying to protect; and mud can create overheating problems, as well as adding fuel-and power-sapping weight. It’s a hassle, but get under and clean out everything above the plates now and then.

Regularly check that the retaining bolts are still done up tight, too. Most plate designs leave some of the bolt heads exposed, and they’ll inevitably be damaged, so it’s worth replacing them before they’re so bad that a socket won’t grip any more. Either that, or you’ll have to grind off the damaged heads and wrestle the bolt shaft out.

Underbody protection is not essential for most RVers, but it is an important consideration for those who venture off the beaten track. Most 4WDs lack full-length armour and have several vital components exposed. It’s actually becoming common to find nothing more than token protection underneath – and some have none at all.

For the cost of a few hundred dollars and some extra weight, you can dispel the worry about what might happen when you’re touring on rough roads. Even the most conservative ‘offroad’ driver can be caught out by the unexpected.

Like all protection, it’s about weighing up the risks, but the cost/benefit ratio here is hard to argue with. Buy quality gear that’s thoughtfully designed, and you can’t go wrong.

One way or another, you’ll want to ensure the following things are protected from damage: