GETTING AWAY IS not always easy. There are constraints of the family variety, as well as work and social commitments, and the biggest hurdle of all — money. We at Caravan World don't believe financial concerns should stop anyone from hitting the road, so we've compiled a list of key cost areas, as well as ways to minimise expenditure. Let’s look at these topics separately before tackling a few other odds and ends. 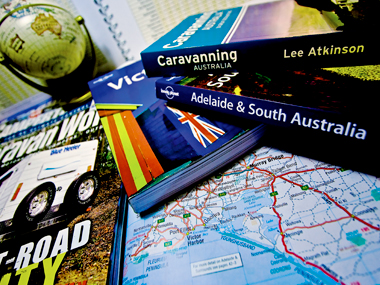 If you still have a choice of tow vehicle, diesel is best for towing long distances. It has a higher energy rating than petrol or LPG and you’ll use 25-30 per cent less than in a comparable petrol engine. Cost aside, diesel engines are great for chugging along under load, which makes for a more relaxed drive, and the fuel is available everywhere because it’s what the transport industry uses and what the locals use on the farm.

LPG has the lowest energy rating, though in a large-capacity engine this won’t matter much. Depending on the installation, fuel consumption can be 30 per cent higher than for petrol but the (far) lower price more than offsets that – in fact, with the government rebate, an LPG conversion is usually a no-brainer for a large vehicle in those parts of the country where LPG is readily available. However, LPG prices rise significantly in remote areas and the savings may not be so obvious – if you can find LPG to begin with, so make sure your vehicle is dual fuel.

Regardless of fuel type, you’ll make significant savings by driving calmly and smoothly and sticking to your vehicle’s fuel-consumption ‘sweet spot’, usually around 80km/h.

Keep tyres at the maximum pressures recommended by the vehicle manufacturer and perhaps even 10 per cent higher on the highway (on dirt roads it’s better to have them 10-15 per cent lower to avoid tyre damage). Avoid using cruise control when driving into headwinds or in hilly country, where it’s best to ease off the throttle a bit and capitalise on the stored momentum of your rig.

Speaking of winds, it might be worth taking advantage of the prevailing winds when planning your itinerary, which saves fuel as well as being easier on the engine and drive train. For an around-Australia trip, this means going counter-clockwise – in winter, for instance, it’s not unusual for trucks to use 30 per cent more fuel going west across the Nullarbor than going east – and for the centre of Australia, it means going from south to north. For more about wind directions in the different seasons, visit www.bom.gov.au/climate/averages and click on the “Wind roses” link.

Apart from that, it makes sense to use shopper dockets when you can and to fill up where fuel is cheap.

Caravanners have already invested a small fortune in their home on wheels, so accommodation on the road won’t be as big an expense as it is for other travellers. Even so, is it really necessary to pull into a powered site at a resort-style caravan park every night?

Sure, it’s good to be able to run the air-con and use the microwave, but one of the great charms of the caravanning lifestyle is getting out there and experiencing our magnificent natural surroundings. National park campsites charge only nominal fees and are often located in the choicest spots, with access roads that are often quite suitable for caravans. Watch a peaceful sunset turn a magnificent cliff face fiery red, and wake up the next morning to the dawn chorus of the birds.

If you really need a long, hot shower and your van can’t provide it, remember that most roadhouses provide showers for a tiny fee – they’re used by truckies but there’s no reason you can’t as well. Many caravan parks will also let you use their facilities for a fee if you’re not a guest.

If you need a "proper" room, there’s a string of affordable motels along Australia’s highways, but why not book into a cheap hotel room in a country town and help the locals prop up the bar? The toilet and shower may be down the hallway but chances are you’ll be the only ones using them.

Having said all that, caravan parks are often close to or in the middle of town where all the action is. They provide an opportunity for camaraderie with other caravanners, and offer facilities that often make the relatively modest park fees almost irrelevant.

You’ll save a lot of money if you cook your own food. Many RVers save a bit more by buying in bulk in major centres, much to the chagrin of shopkeepers in small towns who often rely on passing trade. Perhaps a good compromise is to buy your long-lasting staples in bulk and to procure perishables such as bread, milk, meat, vegetables, fruit, etc., along the way.

When it comes to cooking, our columnist and kitchen acrobat extraordinaire, Lionel Mussell, says, “I’ve found that one-pot cooking is a saver. Cook a casserole-type dish in the bottom of a steamer and steam the vegetables on top. It saves washing up, the vegies taste better steamed, plus the aroma from the stew or whatever imparts a bit of extra flavour.”

There are many other areas where small savings can add up. Here are a few suggestions:

• Invest in a good guidebook that isn’t afraid to express opinions about value for money. Our home-grown Lonely Planet offerings spring to mind, and if you buy the individual state guides, you’ll have a treasure trove of straight talk that can repay the cost of the books many times over.

• Bring all the concession cards to which you’re entitled and flash them around – many places won’t provide discounts unless you ask and it’s often good for 10 per cent or so. Commonwealth pension cards are accepted Australia-wide for many types of discounts but not always, and it pays to have a state seniors card as well (which may or may not be accepted in other states). With seniors cards, the 65-plus version gives more discounts than the one that’s issued when you turn 60.

• If you need medication, ask for the generic variety.

• Consider the advantages of well-priced tours, especially to out-of-the-way places on bad roads. One blown tyre can cost more than the tour, and the operators often have access to top spots that are off limits to the wider public.

• Turn the fridge off overnight to save gas. It should stay cold with the door closed.