Fraser Island is one of the best 4WD destinations in Australia. Most of us know it by its European name, after Eliza Fraser, who was marooned on it for several weeks in 1836, following the wreck of the brig Stirling Castle. But the island’s traditional owners, the Butchulla people, have always called it “K’gari” (pronounced “gurri”), which means 'paradise', in honour of the heroine princess in their creation story. So, when you see signs at the barge landings that say “Welcome to K’gari”, you know you’ve just arrived in paradise.

In 1992, Fraser Island was placed on the World Heritage List because of its scientific importance and natural beauty, with 100 freshwater lakes (the second highest concentration of lakes in Australia after Tasmania), majestic stands of ancient rainforest and a rich diversity of plants and animals. It's also home to the notorious Fraser Island dingo, the purest breed of wild dog in the world.

The island has a subtropical climate and the moderating influence of the Coral Sea keeps temperatures comfortable most of the time, rarely rising above 35C or falling below 5C. Humidity is consistently high and rainfall is heaviest in summer and early autumn. Cyclones are a possibility between January and March but rarely impact the Fraser Coast. 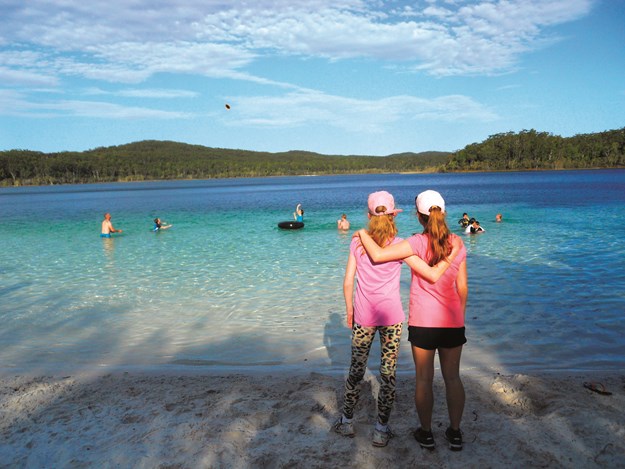 While the weather makes Fraser Island a near-perfect year-round destination, you will need to take into account the peak tourist seasons when planning your visit. Visitor numbers have been as high as 800,000 in a year, bringing about 70,000 vehicles on to the island. So, for anyone with an aversion to crowds or 'Pitt Street' on the beach highway, it’s best to avoid Fraser during school holidays, especially in September-October.

Fuel up, stock up

The nearest major town to Fraser Island is Hervey Bay on the mainland, about 290km north of Brisbane, and this is the best place to fuel up and stock your tucker box for an island excursion. If crossing at Inskip Point, Rainbow Beach is the nearest supply point.
The island is separated from the mainland by the Great Sandy Strait and your 4WD adventure begins with a voyage across it on a vehicle/passenger barge. The Kingfisher Bay Ferry and Fraser Venture both require bookings and leave from River Heads (south of Hervey Bay). A 45-minute crossing on the ferry will deliver you to Kingfisher Bay, while the Fraser Venture takes only 30 minutes to reach the landing at Wanggoolba Creek. Both landings connect with tracks that cross the island via major attractions and each has specific advantages depending on your itinerary and where you want to come out on 75 Mile Beach.

No bookings are necessary for the Mantaray barge out of Inskip Point for a 10-minute crossing to Hook Point on Fraser’s southern tip. But this route is possible only at low tide so it's a good idea to check the tide times before crossing.

If driving, you’ll need a 4WD vehicle with high-clearance and low-range capacity, and a vehicle access permit (VAP). Vans and camper trailers must also be high-clearance and offroad capable. All-wheel drive vehicles and conventional caravans are not recommended and some inland tracks are not suitable for towing.

One thing that many first-timers don’t realise about Fraser is how big it is. You’re never going to see it all in a day and to get the most out of your ferry fare and VAP you need to spend at least a few days on the island. Fraser’s hinterland is a maze of sandy 4WD tracks, fringed on the eastern side by a 120km beach highway from Hook Point to Indian Head, dotted with photo opportunities from end to golden end. Beyond Orchid Beach, another 32km stretch extends to the island’s northern tip at Sandy Cape.

Be aware of tide times as these will dictate when and how far you can drive on the beaches. Most of the west coast is a no-driving zone. Drive times inland may vary depending on track conditions and your driving ability, and remember to allow extra time to see the many attractions along the way.

The best way to appreciate the island’s unique environment at close quarters is to step out along some of the 30-odd walking tracks. The trails vary in length and difficulty and you’ll be sure to find one within your capabilities — be it a short boardwalk through a rainforest, a stroll around a lake, a longer walk across a sandblow or, for the more adventurous, the 90km Fraser Island Great Walk with remote camping en route.

For a real ‘nature-based’ experience, there are commercial and national park campgrounds and designated camping zones suitable for offroad vans and trailers behind the foredunes along 75 Mile Beach. Most of these sites are exposed to the prevailing winds and have no facilities, so bring everything you need, including a portable toilet, to make your stay more comfortable. Portable toilet waste disposal facilities are available in designated locations. You’ll find a comprehensive review of national park camping on the Queensland Parks and Wildlife Service website.

Fraser is renowned for its world-class fishing and hordes of anglers line up on the shoreline from dawn ‘til dusk to bag bream, mackerel, jewfish and trevally. When the whiting’s running off 75 Mile Beach between July and October, it’s on for young and old. Fishing permits are not required but be sure you know the bag and size limits.

There aren't too many places on the planet where you can take your 4WD to a World Heritage-listed island paradise just a few hours' drive from a capital city. K’gari offers a 75-mile beach, world-class fishing, crystal-clear swimming, secluded camping and more than 1500km of 4WD tracks to explore. Be sure to put Fraser Island — K’gari — high on your bucket list.

Fraser Island is strictly 4WD territory. Outside the main villages at Kingfisher Bay and Eurong, every track and thoroughfare on the island is made entirely of sand in varying depths and degrees of difficulty.

A high-clearance 4WD vehicle should be considered essential if you want to get out and explore Fraser - a 2WD or AWD softroader simply won’t cut the mustard when the going gets tough in deep sand.

You can travel in high range most of the time but occasionally you’ll need low range, especially when ploughing soft sand at beach entry/exit points, negotiating gnarly, guttered uphill sections in the forests or if you’re towing.

Here are some helpful tips to help you stay safe and get the most out of your Fraser
Island holiday:

2. Driving conditions vary with weather and tides and can change rapidly. Before you set off, check track conditions and closures on the QPWS website.

3. Be familiar with tide times and plan your excursions to ensure you have clear access to and from your destination. Avoid driving on 75 Mile Beach two hours either side of high tide, or at night.

4. A good set of all-terrain tyres will serve you better in the sandy conditions than aggressive muddies. Reduce tyre pressure before you hit the sand. If crossing at Inskip Point, this should be done on the barge.

5. Be familiar with sand-driving techniques and, if possible, get some lessons or practice before you go.

6. If you do get stuck, make sure you have the gear and know-how to get unstuck. A tyre pressure gauge, spade, sand boards, snatch strap or towrope are basic items.

8. Look out for aircraft taking off and landing on 75 Mile Beach – they have right of way.

9. Get a decent map or GPS to assist navigation on the maze of inland tracks.

10. At the end of your holiday, give your vehicle a really good wash and pressure hose the undercarriage to remove all traces of sand and the salt water.

Bottom line: Slow down and enjoy the ride – it’s not every day you’ll get to drive on a World Heritage island.

Cathedrals on Fraser is the island’s only privately-owned camping ground, with a variety of accommodation to suit all budgets and lifestyles. Nestled within coastal bushland behind the beach that takes its name from the ridge of brilliantly coloured sand cliffs called The Cathedrals (aka The Pinnacles), it’s the perfect setting for an island getaway.

Just 30km from Indian Head, it’s also a great base for exploring the less-visited northern attractions of Orchid Beach and Sandy Cape.

High-clearance 4WD vehicles will have no problem reaching Cathedrals via the cross-island tracks. But if you're an inexperienced driver or towing a van or trailer, it’s advisable to take the Inskip barge out of Rainbow Beach to avoid the inland tracks and opt for a smoother journey along the eastern beach.

Campers, 'vanners and trailers have a choice of level, spacious and shady sites, powered or unpowered, suitable for rigs of all sizes. Well-appointed camp kitchens are fitted with fridges, microwaves, electric hotplates, barbecues and loads of seating for families and larger groups. Facilities include flush toilets, hot showers and a guest laundry.

For those who enjoy camping but don’t have the gear, there are permanent canvas tents that sleep up to four people, with options to include linen and cooking/eating utensils. Even more creature comforts are provided in cabins that include fully equipped kitchens and private outdoor barbecue areas, and come with or without bathrooms.

Cathedrals has one of the best stocked shops on the island with a bottle shop and a kiosk offering hot breakfast and lunch menus. You can also buy pharmaceuticals, bait and tackle, camping gear, ice, gas refills and fuel (ULP and diesel).

There are an estimated 200 dingoes on Fraser Island and it’s not unusual to encounter one in your travels there. They are beautiful animals and seeing one in its natural habitat is a special experience.

But, while they may look like a family pet, they are wild, predatory animals, one of the purest strains of wild dog in the world. They are unpredictable and can be aggressive, especially in autumn and summer, and should be regarded
with caution.

Certain townships and campgrounds on the island are now fenced to stop dingoes accessing rubbish bins or stealing food from people. This has resulted in a noticeable reduction in dingo bites around these areas.

While the Queensland Parks and Wildlife Service has taken steps to protect people, visitors must take responsibility for their own safety by following a few simple rules:

1. Never feed dingoes. To do so may earn you a bite, as well as a heavy fine under Queensland law.

2. Don’t take food to the lake shores and beaches. A picnic puts food at ‘dingo level’ and is hard to resist for an animal that is always on the lookout for an easy meal.

3. Don’t store food or food containers in tents. Keep your tucker in strong, lockable containers and iceboxes or in a closed vehicle.

4. Keep a clean and tidy camp and secure all scraps, fish and bait. Dispose of all rubbish responsibly.

5. Always stay close to children, even small teenagers. Wherever possible, walk in groups.

6. Watch dingoes quietly from a distance, don’t try to engage or interact with them.

7. If you feel threatened by a dingo:

Be dingo-safe and enjoy your stay on Fraser Island.