The Pilbara provides a wonderful contrast to the coastal experience of the Gascoyne and Murchison regions with its high, rugged red ranges, dotted with spinifex, reminiscent of the outback; magnificent gorges, with waterfalls and swimming holes; large iron ore mines and associated industry, even larger cattle stations, and the stunning Karijini National Park.

The Pilbara has a long history of humans interacting with the landscape. The indigenous inhabitants have been singing their song lines and caring for their country for tens of thousands of years. Their stories and culture are seen in World Heritage Listed petroglyphs at Murujuga Peninsula, near Dampier; their markings have been left throughout the Hamersley Ranges; fire stick farming enabled them to manage vegetation and consequently their food supply. 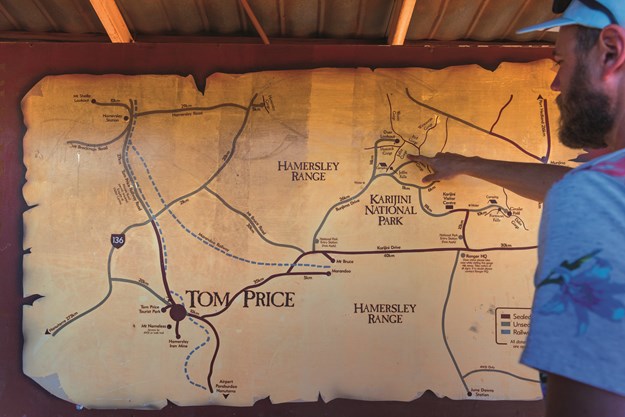 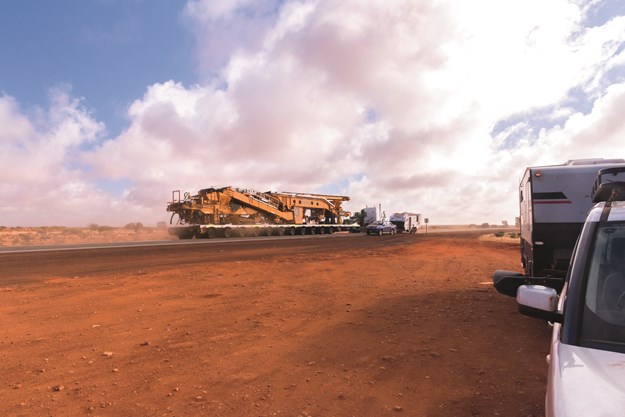 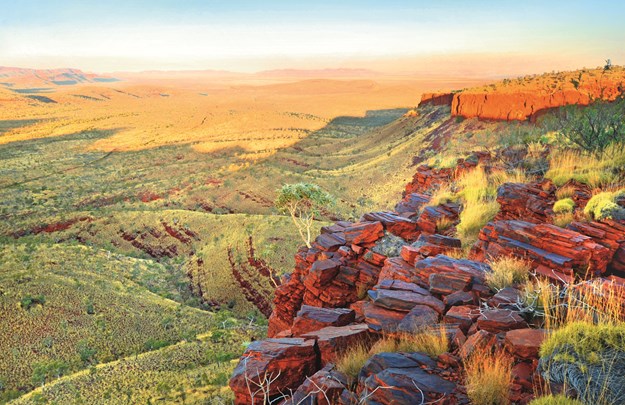 Colonial settlement of the Pilbara commenced in the 1860s with the arrival of white men looking for pastoral lands to graze their livestock. The indigenous population were overpowered and in many instances forcibly moved off their land. Often those who remained were put to work for very low wages by pastoralists and pearlers.

Many Aboriginal people became expert horse riders and stockmen. They were the backbone of the outback pastoral industry. In 1946 the Aboriginal stockmen in the Pilbara had had enough. They went on strike because of poor wages and conditions. They walked off the stations for three years. This had never been done before in Australia.

At the same time many indigenous children ­— especially those of mixed race — were taken from their families and placed in missions, children’s homes, orphanages or adopted out. It was government policy at the time and resulted in the Stolen Generations.

The colonial settlers also brought a new endeavour to the region: mining. Gold was discovered at Marble Bar in 1890 and the town grew to 5000 people almost overnight. Asbestos was mined near Wittenoom from 1936 until 1966. In 1936 some of the richest bodies of iron ore were discovered in the Hamersley Ranges and this was to change the region forever.

In the 1960s the Federal Government relaxed the restrictions on iron ore exports. This paved the way for phenomenal investment in mines, townships and associated infrastructure from the Hamersley Ranges to the docks at Dampier and Port Hedland. The 1960s and '70s saw rapid expansion by miners like Rio Tinto, Hamersley Iron, BHP and more recently Fortescue Metals.

ORE FROM THE LAND

In addition to iron ore, commercial oil and gas reserves were discovered 200km off the Pilbara coast, near Barrow Island in 1964 and 1981 respectively. These have since become known as the Gorgon Gas Project and have now come on stream and are managed by Chevron. Reserves are estimated at 60 years and these mining industries have become major contributors to Australia’s economic wealth. They have created many jobs within the Pilbara.

The removal of ore from the land and the damage to the topography that mining often causes has been particularly confronting to indigenous people as they feel a strong cultural, spiritual and custodial connection with their lands.

You can visit one of these massive iron ore mines at Tom Price, in the heart of the Hamersley Ranges, 290km from Karratha. Rio Tinto Mining offers two-hour mine tours on most days during peak season. Bookings are essential through the Tom Price Visitor Centre.

From Tom Price you can climb The Four Mountains (Mt Sheila 987m, Mt Nameless 1128m, Mt Bruce 1235m and Mt Meharry 1249m, the highest in WA). Each provide breathtaking views, especially when the sun is low in the morning or evening. Tom Price (the highest town in WA) is also the stepping off point for the stunning Karijini National Park.
Karijini National Park is the jewel in the crown of the Pilbara. Massive mountains and escarpments rise up from the flat plains. There are breathtaking gorges and waterfalls, along with beautiful creeks and waterholes, ideal for swimming. Wind and rain has slowly eroded the landscape from the surrounding rocks, more than 2.5 billion years old. The park is the traditional home of the Banyjima, Kurrama and Innawonga Aboriginal peoples.

One of the great things about Karijini National Park is that the sites are very accessible: simply pull into a car park and walk 200m to look into a deep canyon or gorge, or see a waterfall.

There are many excellent walking trails, for beginners to experienced hikers. Some of the must-see spots are: Fortescue Falls, Dales Gorge, Hamersley Gorge, Weano Gorge and Oxers Lookout.

Any visit to Karijini National Park should commence at the Visitor Centre. This modern building has been designed in the shape of a goanna moving through the country. It is symbolic to the local Banyjima people. The tail represents their history, the middle represents indigenous law and the head represents the future direction. Inside there is a range of static and interactive displays that takes you on a journey of places and people, through stories of geology, plants, animals and indigenous culture. It is particularly worthwhile.

Finally, one lesser-known but equally beautiful destination is Millstream Chichester National Park. It’s located 200km north of Karijini National Park. There’s plenty of swimming, canoeing and sailboards along the water-lily filled wetlands and waterways. It also has beautiful gorges and waterfalls. Scenic drives (Snappy Gums 20km circuit) and excellent camping sites, along with plenty of gas barbecues and toilets make for a comfortable experience. Millstream Chichester National Park is the traditional home of the Yindjibarndi people, and they have produced an excellent self-drive booklet for visitors, incorporating interpretive signs en route.