The far northern beaches of Sydney have a reputation for being the playground of the rich and famous. Palm Beach is home to some of the country’s priciest real estate and is recognised by many as the filming location of popular TV soap, Home & Away.

What few travellers realise is that the appeal of this area branches far beyond visiting the ‘real’ Summer Bay. On the other side of the Palm Beach peninsula, the harbour known as Pittwater has so much to offer anyone who has a love of nature, history and outdoor activities.

Getting to know Pittwater

Head due north from Sydney, past Manly, Dee Why and Narrabeen to reach Pittwater. One of the first places to be named in Australia, this location honours William Pitt the Younger, who was Prime Minister in Great Britain in 1788. 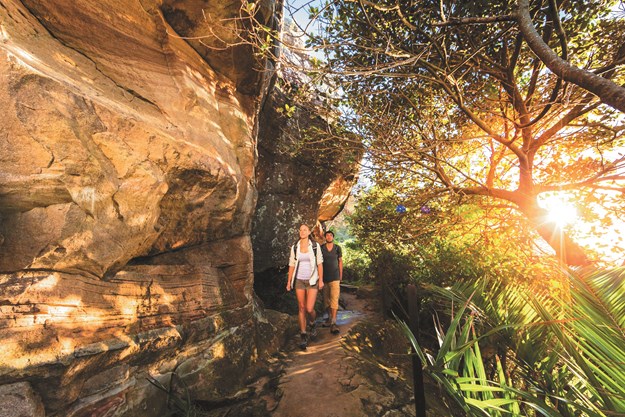 Back in those early days, much of the land surrounding Pittwater was home to freed convicts who established themselves as farmers and traders. As time passed, the area became easier to access and the landscape more urban.

Now a sought-after location for Sydneysiders who want to be within reach of the CBD but away from its hustle and bustle, the Pittwater area also offers offshore living, with a few hundred homes that can only be reached by boat.

Stretching from the western side of the Barrenjoey Peninsula to West Head in the Ku-ring-gai Chase National Park, Pittwater itself is around 18sq km. This part of the wider Sydney metropolitan area is less than an hour from the city but it is easy to feel a million miles from anywhere.

Whether you are looking for activity and adventure, you want to find out more about the land’s original inhabitants, or you simply want to relax like a local, there is no shortage of things to do on and around Sydney’s second harbour.

The peaceful waters of Pittwater are a destination even many Sydneysiders are yet to discover. To get up close and personal, one of the best ways to explore the area is on a kayak.

Helen Morrow has been running Paddlecraft from Gibson’s Marina at Bayswater for ore than a decade. “We often get people booking tours who have lived in Sydney all their lives,” explains Morrow. “When they arrive say they can’t believe they didn’t come sooner. We have a world-class destination and national park on our doorstep, yet even many of the people who live around here fail to make the most of it.”

Visitors to the area who want a guided kayaking experience have the option to select from a half or full day tour. The full day tour picks up participants early before dropping them off at the sensational West Head lookout. After following your guide through bush trails to the water’s edge, the kayak journey includes regular breaks at secluded beaches.
Those who join the half-day adventure depart from the marina location before circumnavigating nearby Scotland Island and taking a rest in one of Pittwater’s water-access-only bays for morning tea.

During the guided bushwalk that follows, you may get a glimpse of some of Pittwater’s local wildlife, including sea eagles, wallabies, goannas and raucous kookaburras. Keep an eye out when you are back on the water as it is not unheard of to spot dolphins, fairy penguins, stingrays and sea turtles.

If you’re not up for a full day or even three hours of paddling at someone else’s pace, hire a kayak and venture out on your own. Paddle past the waterfront properties and choose your favourite vessel from the many sailboats and yachts moored in the area before exploring the tranquil glass-like waters of McCarr’s Creek.

Ku-ring-gai Chase National Park spans close to 150sq km, with bushland so dense it is hard to imagine any trace of civilisation once you enter the park. There are plenty of activities to choose from, including self-guided walks, offroad cycling or picnicking.

Visitors also have the option to join a guided Aboriginal heritage tour revealing incredibly detailed carvings which date back tens of thousands of years. Led by Laurie Bimson, the tour offers insights into the meaning behind the figures, fish and animals which were etched into the rock face centuries ago.

Himself one of the Guringai people, Bimson is a descendent of Bungaree, the tribe’s leading figure at the time of European settlement. During his small and personal tours, visitors have the opportunity to ask questions and learn details of the ancient Aboriginal culture and way of life. Laurie also explains the many uses for the surrounding vegetation, showing tour groups how the simple grass tree was used by Australia’s indigenous inhabitants to make food, weapons, tools and even glue.

It is easy to spend an entire day exploring Ku-ring-gai but remember the gates are closed for vehicles at sunset. If you're still in the park after dark your only option to make it home is a rather long walk.

Departing every hour on the half hour, the Church Point Ferry Service delivers offshore residents to their homes. The hour-long tour offers a close up view of the offshore houses at Scotland Island, Lovett and Elvina Bay. Ferry owner Penny Gleen recommends buying a return ticket.

“You can disembark at any of the eight ferry stops to do some exploring before catching a later ferry back to what locals refer to as ‘the mainland’,"says Penny.
When you have finished your round trip on the L. Duck (named after a fondly remembered ferry captain), Church Point’s Waterfront Cafe and General Store offers generous portions of fish and chips, which can be washed down with one of many on-tap beers or wines. On Sundays this venue hosts a popular music session, with an eclectic mix of tunes from local bands.

Further north, the Palm Beach ferry comes and goes from the western side of Palm Beach. This service covers two routes, firstly to the charming picnic and swimming spot known as The Basin, at the foot of Ku-ring-gai Chase National Park. Pack your lunch but beware of the resident bush turkeys and wallabies who will be pretty keen to share!

Passengers on the Palm Beach ferry can also take the journey further north to Ettalong, one of the southernmost points of the Central Coast. The round trip crosses open ocean and takes 45 minutes. If you have time up your sleeve, disembark at Ettalong for lunch at one of the many eateries within walking distance of the ferry wharf.

At key times during the year, usually June/July and September/October, visitors can also book a three-hour whale watching tour from this point.

For many years, the suburbs of Sydney’s far-northern beaches have been best known for their surf breaks. However, the area is currently undergoing an evolution to be a premium foodie destination, with many passionate entrepreneurs driving the charge.

The community in this area are coffee lovers and you will be hard-pressed to find a brew which disappoints at any of the cafes surrounding Pittwater.

If you are looking to sample some home-grown craft beers, head to the recently opened 4 Pines Public House in Newport, which offers several locally produced brews on tap. This venue has nightly specials, including free pints on Mondays, two for one taco nights and a traditional Sunday roast.

Down the road from 4 Pines, The Newport is the ideal place to spend a lazy afternoon. With views out over Pittwater, this venue is 80 per cent beer garden. The menu offers everything from gourmet burgers and pizzas to salads and freshly prepared seafood dishes. For parents, there’s also the added benefit of a separate play area to keep the kids amused.
Nearby Mona Vale is home to the Park House, a newly-refurbished venue catering to all tastes with its own pizza kitchen, burger bar and Mexican-meets-Mediterranean-meets Middle-Eastern restaurant.

For an upmarket experience, set some time aside to visit Jonah’s restaurant at Palm Beach. This award winning establishment offers contemporary Australian cuisine and a wine list extending to several hundred vintage Australian and international drops.
The locals around Pittwater are a friendly lot who are keen to share details of their beautiful home. Stop and have a chat on your adventures to find out other best-kept-secrets about the area and get recommendations on the spots worth dropping in on.