Far downstream of the dam wall that turns the mighty Ord River into Australia’s largest man-made lake, the stream once again runs free, turning briny at tidal reaches where anglers and barramundi meet. About 70km north of Kununurra, Mambi Island on the Lower Ord River is one of the best places to launch a tinnie and the free campground on its grassy banks rates as of one of the east Kimberley’s best. 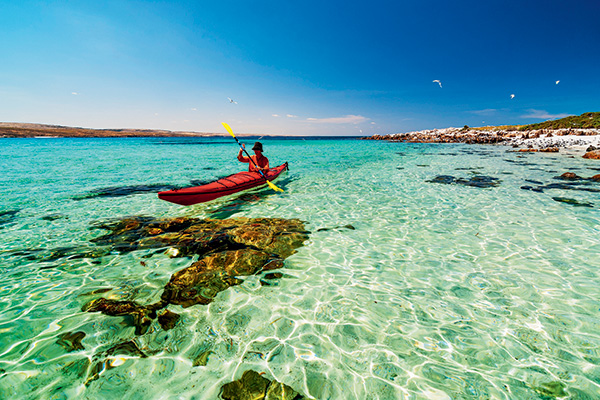 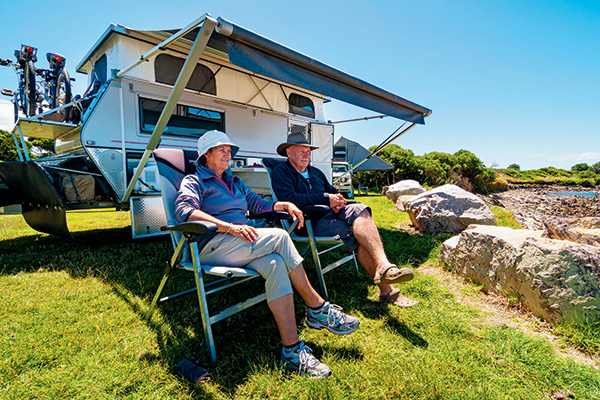 It might be little more than a grassy clearing but its location can’t be beaten and there’s a concrete boat ramp for easy access to a wide stretch of the river. This surprisingly scenic spot may prove difficult to leave, so arrive with ample supplies of drinking water, firewood and food, and remember to take away your rubbish. Pets are permitted but, because this is saltwater croc territory, dogs are best kept well away from the water’s edge.

You’ll find Mambi Island on the back road between Kununurra and Wyndham – a 4WD route that follows Parry Creek Road to a host of freshwater swimming holes and waterfalls, and leads to Parry Lagoons Nature Reserve where Marlgu Billabong attracts an astonishing variety of migratory bird species. The best time to visit is during the cool, dry season from May to September. 4WD vehicles, offroad caravans and camper trailers are recommended.

Facilities: Toilets and a boat ramp

After the bone-rattling journey up Cape York Peninsula, this beautiful, deserted beach with see-through waters is a real find. Lapping a sandy cove and providing campgrounds on both sides of a rugged point, Mutee Head provides perfect ocean views from a grassy camp shaded by sheoak trees.

There’s little more to this idyllic spot than solitude, great beach fishing and endless beachcombing while you watch sea turtles surfacing in the bay, but else could you need?

You can camp on both sides of the headland, but we favoured the northern side where there’s enough level ground for a handful of offroad rigs and a couple of fire pits to cook up your daily catch.

To fish the bay, you can launch a tinnie on Mutee Head’s southern side and try for catches of mackerel, queenies, trevally, flathead and perhaps a threadfin salmon. Follow the signposted sandy track north to access the Jardine River and wrangle barramundi, mangrove jack and cod.

With no time limits and fresh water available at a creek 15km back towards the main road north, don’t be in a rush to move on from Mutee Head campground (even if you can’t swim in those oh-so-pristine seas).

South of Jindabyne, where the Snowy River leaves the High Country, the Barry Way cuts an historical path to the Victorian seaside through rugged white box woodlands.

Following a route pioneered by stockmen who rounded up wild brumbies and pushed cattle to market, this scenic route passes a string of free campgrounds with unbeatable Snowy River access for trout fishing, paddling and swimming.

The most spacious camp is found on the Pinch River where big, grassy sites are spread along both sides of a chilly stream that anglers say is a trout stronghold. Like me, you might be tempted into the invigorating pools beneath the creek’s frothy cascades before warming up on long, sunny walks to watch emus, kangaroos and swamp wallabies graze. There are no time limits imposed at this easy camp, and the excellent facilities include wheelchair-accessible toilets, picnic tables and fireplaces. You’ll need to bring your own firewood and drinking water, or simply boil a billy of river water over the fire.

Location: The Barry Way stretches south of Jindabyne to the Victorian border. Access for large caravans is easiest from the south

Paddling easily across a barely rippling sea, we glide to Lipson Island and linger to watch crested terns, cormorants and pairs of magnificent Pacific gulls shifting restlessly on the sand. Suddenly, the sea explodes as dolphins hunting a school of blue salmon into the shallows trigger a seagull feeding frenzy.

Must be time for fishing! Back on the beach, it takes mere minutes to reel in our first catch of salmon and our easiest seafood dinner ever is served spiced and diced and fried up less than an hour out of the sea. We devour it as the sun goes down, our feet dug into the sand on one of South Australia’s prettiest beaches.

Lipson Cove is a top free camping spot with large, designated campsites that accommodate big rigs, and just enough facilities to encourage self-sufficient beach-devotees to spend a few days. There are toilets, fire pits and rubbish bins and no time limits on your stay.

Pets and generators are permitted and there’s even mobile reception – if you wander around a bit! At low tide, a sand spit surfaces to connect campers to tiny Lipson Island, and a walking trail leads south of the campground along the coastal cliffs.

Flanked by long stretches of white sand beach just east of Burnie, Hall Point is a picturesque headland camp that promises much more than first meets the eye.

As darkness falls, tiny tunnels dug deep into the headland’s sandy fringes come alive with the sound of noisily peeping chicks awaiting their penguin parents, who soon tumble out of the surf, bellies full with fish to share.

The penguins’ nightly nocturnal commute is a magical experience for travellers spending time at this unassuming camp. For hours after dusk, we sat quietly above the beach, waiting and watching before finally, the cavalcade of little penguins begins. Emerging suddenly from the surf to find awkward footholds in the tumbling waves, they strike up a melodic singsong, answering the hungry chicks calling them back to their nests. Only about five per cent of Tassie’s tiny penguin population nests on the mainland, making Hall Point’s rookery a precious place.

The best time to visit is from November to March, during their summer breeding season. If you plan to penguin-watch, wear dark clothing and find a spot behind the beach that doesn’t block the penguins’ passage from the sea to the dunes. Be sure to settle in well before the penguins appear. When they do, remain quiet and still, avoid using camera flashes, cover your torches with red cellophane and remember never to shine them directly at the penguins or at any spots where they are coming ashore.

Without toilet facilities, this camp suits only self-contained rigs but, for penguin encounters, it can’t be beaten.

Facilities: Picnic tables only. No toilets

The full feature appeared in the 2017 Caravan World Yearbook. Subscribe today for the latest caravan reviews and news every month!