Travelling around Australia: A retrospect

Denyse and I married in Brisbane, Qld, in 1974. We were young and ready for an adventure. The day before our wedding, we purchased a new Ford Falcon hardtop two-door GS, without much thought as to how suitable it was for our purpose. We loaded it with gear and set off on a round-Oz honeymoon straight after our wedding.

Denyse, a doctor, had organised a locum in Sydney, so we drove down the coast road, staying in onsite vans or motels. We then checked out Canberra before continuing on the coast road to Melbourne.

Our next stop was Mildura. During the three months we were there, we travelled widely in the area, including up to Broken Hill and Silverton. 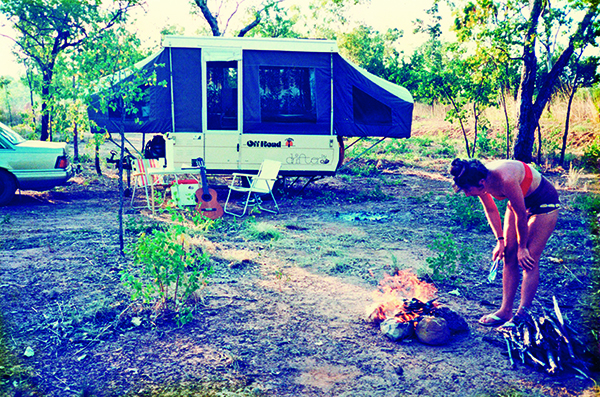 On Christmas Eve in 1974, Darwin was hit by cyclone Tracy and we decided to head up there as part of the relief team.

Apart from our trips to Cooktown and Broken Hill, the roads we had travelled on were mostly sealed, and we had no problems finding onsite vans. But now we had to tackle the unsealed Nullarbor. The road was pretty corrugated, but the only incident was running into a large flock of galahs, with very messy results.

We booked into the motel at Eucla, as we wanted to see the old telegraph station. After such a dusty trip, Denyse washed her long hair, only to find the water in the shower was salty. She looked a real mess with wet, tangled hair going into the dining room for dinner. We were the only ones there, apart from the Leyland Brothers, so we all joined up for dinner and had a great night.

It was an uneventful trip to Kalgoorlie, which was a wild old town in those days. The car was running beautifully, with not even a puncture, as we continued on to Perth where we were very impressed by the layout of the city and the friendly people.

Our next stop was Australia’s only monastic town, New Norcia, which was established in 1847. It was famous for its valuable 16-18th century art collection and was a self-sufficient community, growing olives, grapes, almonds and other crops that seemed exotic at that time. The gate to the monastery was open and we wandered in, to the consternation of a monk who found us. Women were not meant to be there, but Denyse won him over and he took us and showed us the extremely valuable paintings they had. Some of these paintings were stolen not long after that, and others were destroyed in a subsequent fire.

We took our time travelling up the Western Australian coast where there were more dirt roads, including the stretch from Port Hedland to Broome. This 600km stretch of dirt road was very dusty but well-maintained. It was so remote back then, though, and it felt quite adventurous to do the drive, as you were completely out of contact with the rest of the world – no mobile phones and no reception on the car radio! And no air-con either.

There was no van park at Eighty Mile Beach then but we had heard of the wonderful shells that could be found there. We took a 24km sand track out to the coast, through Anna Plains – fortunately meeting no vehicles and without getting bogged – and I managed an eight-point turn at the end, so the car was pointing back out the way we had come.

During the afternoon, when we were sunbathing, a 4WD ute came down and parked in front of the car, blocking us so we couldn’t drive off. Two guys with rifles got out and started up the beach, shooting at random. As they passed us on their walk south, we enquired what they were doing and they said, "Shooting sharks". We were terrified by this stage, as you can imagine, but they came back after dark and left without another word.

With our nerves still jangling, as no one knew where we were, I opened a hot beer from the carton I had. This was summer and the beer was hot. After a few more beers and some baked beans, we settled down for the night. I slept outside on a sleeping bag while Denyse retired to the car when the scuttling crabs became too much. I woke up covered in sand crab tracks and wet from a shower of rain, complete with a massive hangover. Oh, the joys of travel. But we had survived.

We reached Broome on Easter Thursday and booked an onsite van at Cable Beach Caravan Park, which was beachfront in those days. All we could buy, meat-wise, was a chunk of liver, so I used it to catch a 12lb trevally at the jetty. Perfect – we had enough fish for all of Easter! At that time, the luggers were still pearling and tied up at Streeter’s Jetty, which we found overgrown with mangroves on our last visit. Chinatown really was Chinatown then and seemed very exotic to us. Pearl shells and shells with cultured pearls in them were sold quite cheaply, so we bought a few and still have them. At a very low tide we managed to walk out to the flying boat wrecks, bombed during the war.

We were eager to get to Darwin now, so we left Broome after Easter and visited Derby for a few days before arriving at Fitzroy Crossing, intending to spend the night there. Unfortunately, it was pay day and the publican at the Blue Pub told me to move on, as there would be trouble that night. A crowd of, mostly drunk, locals had already gathered around the car, so we didn’t need a second telling to head off to Halls Creek.

What we didn’t know was that a cyclone had been through, and the police were flooded in and had not yet been able to erect a ‘road closed’ sign. The road was dirt and there were long stretches covered in water. We walked through most of them, trying to ascertain the best track without getting bogged or flooded and, at times, I had to go bush. At one stage, the car stalled and I used the starter motor in second gear to jump it out. It was a horror trip and it was dark when we arrived at Halls Creek. When we pulled up at a motel of sorts, we found we had staked one of our tyres, with the stake still in, and realised how close we had been to disaster. The mud brick buildings at Old Halls Creek were still in good condition and with no fences, so we were able to wander in and look at them. Sadly, there is not much left now.

Remarkably, the tyre was the only damage we had, and so we pushed on to Timber Creek, via Wyndham.

Timber Creek was a memorable stop: the only building was the pub, with a tiny bar, fuel bowsers and a dormitory at the back. The lady who owned it had a small child and had recently lost her husband.

Although there were few other travellers, Denyse and I helped her out in the kitchen and bar. We were the only ones staying there that night and the next morning, she took her child and closed the doors and left. That building is still there.

Elephant grass had grown very high on the roadside leading out of town after all the rain and as we drove on it hit the car antenna, bending it at right angles.

Our next stop was Darwin. I had arranged a job at a tyre dealership while Denyse was to be employed in the hospital. Due to the cyclone, the only accommodation was on board the Greek vessel Patris that was brought back from a voyage to Japan to be scrapped. After passing through checkpoints with armed guards, we arranged a cabin on the Patris and checked out our jobs. Denyse was rostered on night duty and had to stay in the nurses’ quarters at the hospital, while I would stay on the boat and work day shifts.

Darwin was in a very sad state, with a lot of destruction and chaos. The security situation on the boat was quite frightening and we had nowhere safe to leave our car with all our possessions, so we felt our only choice was to move on after a few days.

As we were about to leave Darwin for Charters Towers, there was a petrol strike in Queensland. The highway was also blocked at Newcastle Waters due to flooding. Police were letting traffic through, going south-east via Borroloola/Cape Crawford, at midnight only, so we bought several petrol containers in Darwin.

We drove straight through to the roadhouse at Daly Waters, where we filled the petrol containers. We had no option but to have one at Denyse’s feet, and wherever we could fit them in the car. How dangerous is that? I managed to get some rest, sleeping in the car before our midnight start, then driving straight through to Mt Isa. The police let the road trains go first and they cleared the road: we saw dead cattle and roos everywhere. We transferred our fuel as soon as possible and reached Mt Isa without incident. After a good night’s sleep, we tackled the bad dirt road through to Charters Towers, again without incident.

We had four months working there to replenish our funds, then headed off to Cooktown to complete our trip. After deciding to sell our land, Denyse and I moved to Bowen to open our own surgery.

Our first around-Australia trip was completed with no damage except for the one tyre, covering thousands of kilometres of dirt roads. Our second round-Oz trip was in 1988, towing our offroad camper trailer with a 1986 Commodore. Not a lot had changed, although some dirt roads had been sealed. We explored many offroad places, including Kakadu National Park, which had not been gazetted on our first trip, and took that car and camper on several 4WD-only roads. With care (and luck) you certainly don’t need a 4WD to travel this great country.