In keeping with the rest of the Winjana fleet, the Strzelecki has a powder-coated 150x50mm (6in x 2in) RHS steel chassis that rides on Timbren independent suspension. That comes complete with concealed shock absorbers for the 16in wheels and offroad tyres. Included in the overall chassis construction are the overhang mounting, Hayman Reese hitch, electrically-operated front jacks, and mounting brackets for the two 9kg gas cylinders. Part of the hitch mounting structure includes a metal tray for firewood or similar.

Like the rest of the Winjana range, the Strzelecki has a Canadian spruce pine frame. The timber is imported by Winjana and Brennan reckons it’s the best. He uses 1 1/2x1in (38x25mm) section for the main frame, 3/4in (19mm) ply for the floor and 3/8in (9.5mm) structural ply for the roof. 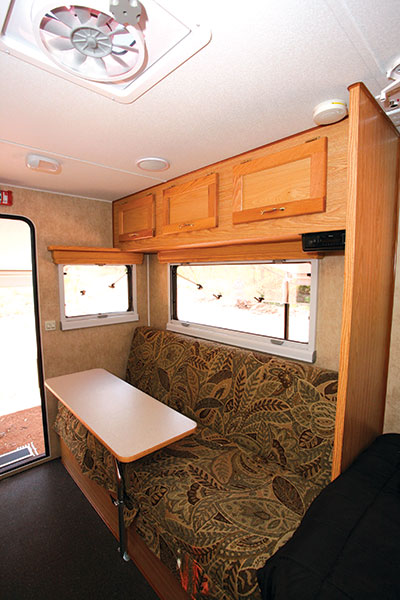 Insulation on this unit comes by way of 25mm polyester all round, and this is clad in silver aluminium with a lower waistline of black alloy checkerplate to finish the look. Awning-style double-glazed acrylic windows are fitted all around, and the door is a Camec security item.

For a relatively small RV, there is a surprising amount of external storage. There are two tunnel storage compartments in the overhang, the forward one a through-boot and the rear having offside and internal access. A third bin door at the front nearside gives access to the underbed area.

There are two awnings fitted to the Strzelecki, one on the nearside wall and one on the rear wall above the door. I reckon there’s a case for fitting triangle vinyl or fabric to cover the area between the two awnings and sourcing a custom-made item shouldn't be too hard.

A notable feature of the Strzelecki is that it has a rear wall door entry. That’s done for a good reason. In a unit this size, it saves a considerable amount of space. Apart from anything else, it allows for a front nearside corner French bed and a small bathroom in the opposite corner, whilst leaving plenty of space in the rear for a nearside lounge and offside kitchen. The area taken by the habitation door is part of the walkway between kitchen and dinette/lounge.

Where this layout is a winner over a similar-length caravan is that all the area behind the bed and bathroom is gained space.

Many fifth wheeler designs use the overhang area for a bedroom but that would not work in this case, so it’s all used for storage.

As noted above, some of it is accessible from the outside but the rest provides a cupboard at the back of the bed. Relatively speaking, the general storage both internal and external in this Strzelecki scores very well.

A point of note is that the general decor has a slightly North American feel about it but I’m assured by the Winjana team that is entirely optional – the colour scheme is your choice.

Being set up for offroad as this Strzelecki is, it also comes with the essentials for self-contained travel with items like the 160L freshwater and 110L grey water tanks. In addition to that, the two 100Ah batteries are charged up by two 150W solar panels. You'd probably run out of food first, although, there’s a fair bit of storage inside and out.

SLEEPING AND CLEANING UP

Not everybody likes the so-called French bed layout but it saves on space and allows the adjoining bathroom to fit in as well. There are no bedside shelves or compartments, indeed, the only fittings are two LED reading lights but I reckon there some potential there with a bit of cabinet modification. At the base of the bed, two good-sized drawers are fitted into the angled section.

Like quite a few other Strzelecki features, the bathroom is a surprise in that it is bigger than you might expect. Indeed, there is enough room for a separate shower cubicle, Thetford cassette toilet and a small vanity cabinet with a shaving cabinet above.

Like the bathroom, the kitchen bench area is notable for its compactness. It does feature a 136L Dometic fridge right in the corner, which is set at a user-friendly height, mostly because the Suburban water heater is located underneath. Set into the benchtop are the combo three-burner cooker and stainless steel sink both with hinged lids. That stills leaves a bit of benchtop workspace at the forward end. A slight oddity, the rangehood is fitted under the microwave, which is offset from the cooktop. However, there is a reason: the window behind the bench area makes that necessary.

For convenience reasons mostly, the dinette/lounge is a simple sideways-facing seat with a single arm mounted swivelling table. It’s a fairly basic setup but does work quite effectively. There’s plenty of ventilation in this area with windows on both walls and the habitation door as well.

There are several areas where this little fifth wheeler outshines a caravan of a comparable length. For starters, the towing combination is a metre or so shorter. With an ATM of 2450kg, it’s not particularly heavy and towing it behind the Isuzu D-Max was a breeze – being free of snatching and jerking that occurs with some vans. I barely noticed it was there behind me. Overall, the combined towing length is just 10.4m (34ft).

Offroad manoeuvrability is outstanding. Due to the location of the tow hitch over the rear axle of the vehicle, not behind the bumper bar, much tighter turns in forward and reverse are possible. In addition to that, large undulations in the road surface were much less of a concern and more easily navigable. I reckon this towing setup places much less stress on the tow vehicle and the driver.

It’s definitely possible that caravanners considering offroad travel will take one look at the Strzelecki and say “not for me”. Yet for the serious offroader and even for a blacktop driver, this little fifth wheeler has much to offer.

Its relatively small size and towing weights for starters give it considerable manoeuvrability. As does the position of the pin hitch over the rear axle of the tow vehicle.

Inside the Strzelecki, there is a place for everything and enough space to get around. However,  I reckon most people will be living outside, underneath one of the two awnings – an advantage of rear door entry RV.