Malcolm Street — 13 February 2018
Are you ready for your next offroad adventure with the AOR Aurora?

A recent trend in the recreational vehicle industry is the growth of the hybrid, aka hard shell camper, which is a cross between a camper trailer and caravan.

Australian Off Road (AOR) has successfully encouraged that trend with a range varying from lightweight hybrids to full height caravans, like the subject of this review, an Aurora Off Road. 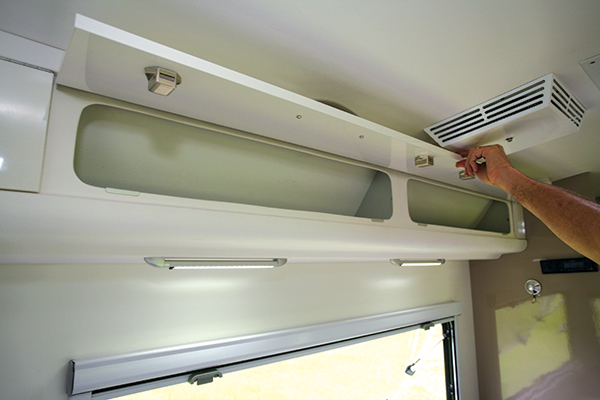 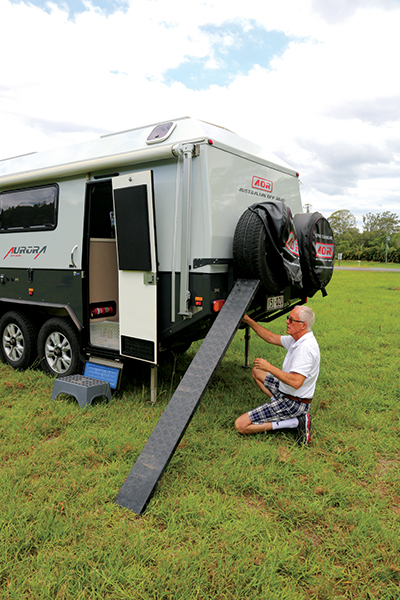 It’s a caravan that managing director Steve Budden is very enthusiastic about. That’s not really surprising given he designed a fair bit of it himself. Indeed, the last time I saw him, he was in the Flinders Ranges testing it offroad with his wife, Rhonda.

Talking a few facts and figures, the Aurora has an external body length of 6.25m (20ft 6in) and a width of 2.1m (6ft 11in). A careful observer may note the van is narrower than average and may also note its oblique shape, which AOR calls its faceted design. The AOR team reckons it improves fuel consumption and manoeuvrability along narrow and winding bush tracks.

Even the rooftop is angled, although there is enough horizontal space for the all-important solar panels. There is no doubt this practical design gives the Aurora a very distinctive look.

A frameless construction, the Aurora body design utilises fibreglass composite panels for lightweight strength that are built on a SupaGal RHS chassis.

Although the Dometic acrylic double glazed windows are standard items, the Aurora’s body shape means that a purpose-built habitation door has to be used.

As a good offroad caravan, it comes fitted with independent coil spring suspension designed by AOR, with the coils rated as variable to accommodate all load conditions.

Although the Aurora is not a particularly large caravan, it has a surprisingly large amount of external storage space, even with the external kitchen fitted to the front nearside. It’s not just space either, being fitted with items like drawers and a slide-out for a generator.

The two jerry can holders at the front are easily accessible but not protruding in any way thanks to the body shape. The payload is a generous 900kg but nearly a third of that could be absorbed by the water tank capacity. Although it looks like the Aurora has two front boots, it doesn’t. The top bin cover is just a hinged lid for carrying firewood collected along the way.

There’s little doubt the Aurora is designed for long-term remote travel. Both the payload and freshwater storage capacity (280L) are obvious clues to that. As do a few other features such as the 480W solar array, 200Ah lithium battery capacity and 200W inverter. Aurora does not come with a cassette-style toilet, instead it offers a macerator toilet and a 110L black tank, something you’re more likely to see in a large fifth wheeler or motorhome.

Given these inclusions, I thought it was unusual there was no grey water storage in the unit I saw. However, you can opt for a smaller 220L freshwater tank, and a 60L grey water tank. Not a bad idea I think for travelling in environmentally sensitive areas.

There are a few unconventional things about the Aurora but the internal layout isn’t one of them. It features a full-width rear bathroom, front island bed and the expected kitchen bench facing a dinette.

For those who really like a caravan-queen-sized bed, then the Aurora delivers. However, given the reduced external width, there’s no bedside access which may not suit some travellers. However, many will adapt and you still get a bit of crawl way space, overhead lockers, reading lights and large windows on either side.

For the 6.25m (20ft 6in) length of the Aurora, I reckon you get a very well sized kitchen, a bonus given the external facilities that are also available. Clearly someone at AOR understands space, because in addition to the expected features – cooker, oven/griller and stainless steel sink/drainer – there is still a generous amount of multiple drawer space. A neat but often forgotten feature is the tea towel rail under the overhead lockers – similar ones are placed on either side of the bed. It sure beats using door handles.

Compared to what you’ll find in some road-going caravans, the simple cafe dinette in the Aurora looks quite small but it’s more than adequate for two people and it’s quite easy to slip in and out of.

Under the table is a floor level bin which has two 240V mains powerpoints. On that subject there is an amazing amount of power outlets with the kitchen bench having four mains and two 12V outlets fitted at the bed end of the bench.

No space is wasted in the Aurora, with AOR filling the space under the seats with batteries, battery management system, hot water heater, diesel heater and assorted electrical connections. In a step, apparently novel in the RV industry, AOR has labelled the fuse circuits (yay!).

Certainly the bathroom does not have the fancy look I have seen in some but, practically speaking, it’s appointed with all the essentials – shower cubicle, vanity cabinet and toilet connected to the aforementioned macerator and black tank.

In the Fitness For Purpose department, if the requirements are for a caravan built for offroad use in remote areas, yet fitted out with all the ‘essential’ caravanning comforts, then the Aurora scrubs up very well indeed. It’s obviously a van designed for someone for whom the purchase price isn’t an issue built by a team who gets out into the field.