The New South Wales Retreat Caravans dealer Parravans happens to be in Newcastle, which importantly for your reviewer, is a short step away from the winemaking area of the Hunter Valley. This makes it an excellent place for both a visit and a photoshoot for the Retreat Fraser 199C-RB.

It’s a van with an external length of 6.45m (21ft) and the somewhat standard layout of a front island bed and full-width rear bathroom. However, it does have one very unusual feature, the external rear storage area. 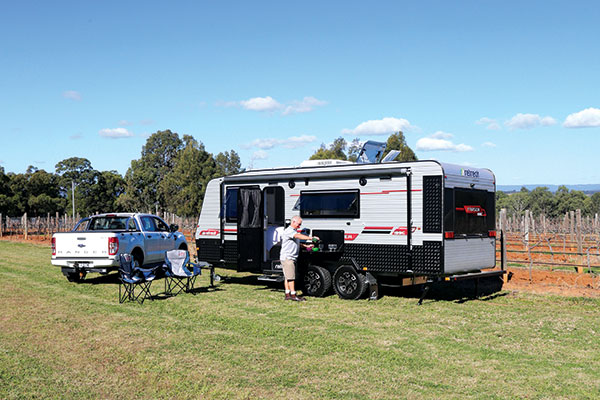 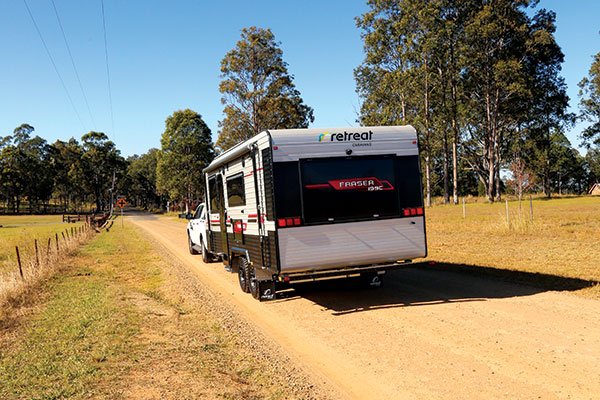 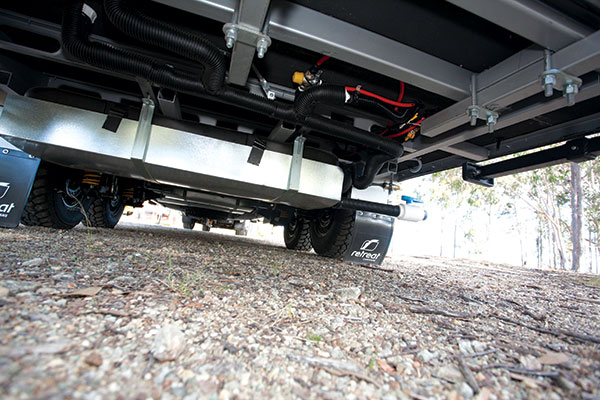 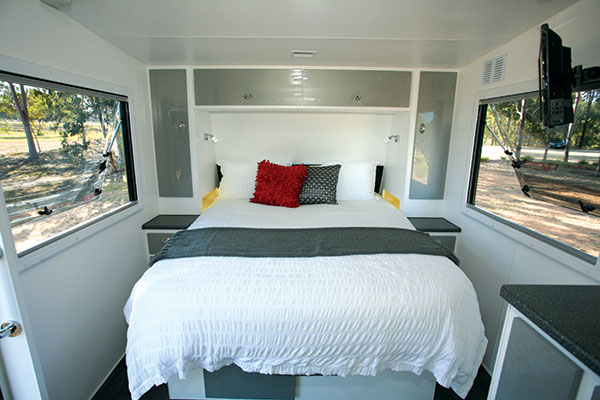 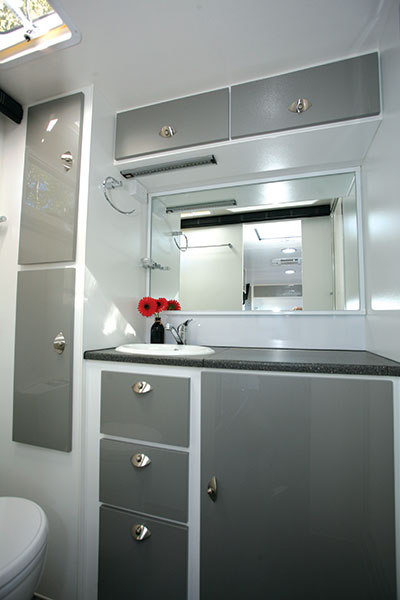 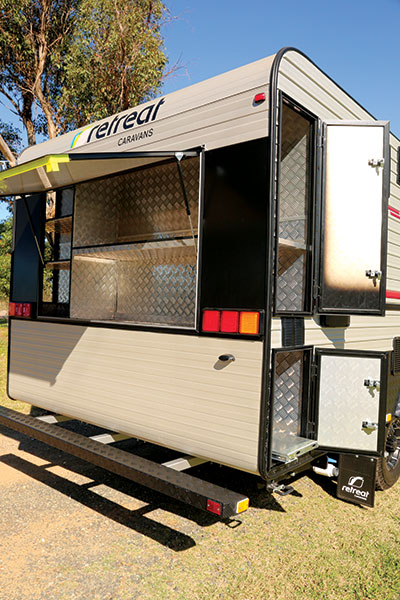 Van storage might seem a funny place to start in a caravan review but this Retreat Fraser 199C-RB comes with a rear boot. In addition to the front tunnel storage, most of the rear wall rear is taken up by an upper and lower series of storage compartments. Both are accessible from either side and the top one also having a large rear door. In addition, it’s not just empty space as both sides are fitted with multiple shelves. Undoubtedly the taller shelves are a bit difficult to reach but the slightly modified bumper bar makes for a good step.

Heavy items placed right at the rear of the van are going to affect the dynamics at the front end. Whilst the two 95L water tanks are in front of the wheels, the 95L grey water tank is behind the wheels and that may affect towing conditions too.

That’s the unconventional part of the Fraser. However, the caravan body and chassis are built mostly in the standard industry way. In the case of the G&S box section chassis, it’s made with 100x50mm (4in x 2in) main rails and 150x50mm (6in x 2in) drawbar plus a 50mm (4in) riser for the suspension. Cruisemaster CRS 3200 independent suspension is used for the tandem axles and the galvanised sheet-protected water tanks are mounted either side of the axles. Two additional chassis features are the battery box that is mounted forward of the offside wheels and the spare wheel that is fitted between the drawbar rails under the van.

Retreat build its caravan bodies using a timber frame that’s clad in aluminium and a lower waist of the ubiquitous black alloy checkerplate. The entry door is a Camec security item and the double-glazed windows and roof hatches are all Ranger items.

Having a 6.45m (21ft 2in) length and the rear storage area means that a rear door in this van really isn’t going to work. So, it’s no surprise that a mid-wall entry is used. Stepping inside reveals an island bed to the left and a cafe-style dinette to the right. All of the offside wall area is taken up by the kitchen bench, leaving the rear section for a full-width bathroom.

Compressed kitchens seem to be the order of van design these days but the Fraser’s has been stretched a little so that not only does the benchtop include a four-burner cooker/grill and a stainless steel sink/drainer but a reasonable bit of bench space as well.

That extra bench length also means a bit more storage space above and below, which include four good-sized drawers, a wire basket slide-out pantry and a couple of overhead lockers. Although one of the latter items doubles as the electrical control centre with 12V fusing, hot water switch, solar panel regulator and water tank gauges. It’ also where the touch panel entertainment system is to be found.

Taking up station in the corner next to the bathroom, the two-door Waeco 190L two-way fridge offers travellers locker storage space both above and below.

Opposite the kitchen the black upholstered cafe-style dinette comes complete with a folding table and fitted wall cushions. It’s definitely a dinette for two because of the wheel arch. Floor locker doors in the feet area give access to the under-seat storage and there’s also a small cupboard under the door.

There really aren’t any surprises in the bedroom area that comes with a standard 1.85x1.53m (6ft 1in x 5ft) island bed. Large windows on either side offer a good cross-flow of ventilation and there’s the expected bed head wardrobes and overhead lockers, along with the under-bed storage area. Generally speaking this van scores quite well in the storage ratings.

Keeping clean both personally and clothing wise isn’t a problem in this well-appointed bathroom. It comes with a considerable amount of cupboard and drawer space, not to mention expected features such as a shower cubicle, cassette toilet and top-loading washing machine. Generally speaking it’s well fitted out with room to move but the space round the loo, aka “elbow room”, is a bit tight.

A look at the weights on this Fraser does produce a bit of a surprise, the Tare mass being 2460kg and the ATM being 3200kg. That does give a load capacity of 740kg, something most welcome given the external storage capacity. However, it does mean a bit of care with the tow vehicle. If running with a standard load, for example, around the 400-500kg mark, then something like the Ford Ranger I used will be just fine. However, if carrying something more weighty, then a larger tow vehicle should certainly be considered.

What I liked about this Fraser van is that although in many respects it is fairly conventional with a spacious interior, in others, like the rear boot setup, it offers a bit of a different approach. The possibility of extra weight in the rear does mean a bit of thinking about overall weight distribution for caravan towing, but it also offers potential for caravanners who don’t use their caravans for conventional travel.