The rig is Brisbane-made by a new force in the caravan industry, AUSRV. AUSRV grew out of Market Direct Campers (MDC) which made its name importing camper trailers and offroad pop-top caravans. The advent of local manufacturing by AUSRV is a huge positive at a time when local manufacturing across many industries is in peril. AUSRV has established a massive Brisbane factory that designs and builds each van in a production line from chassis up. 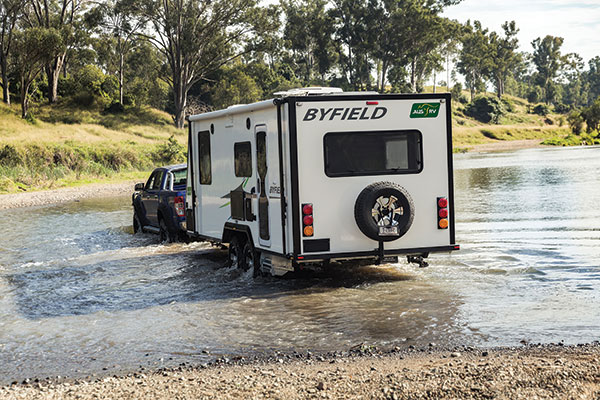 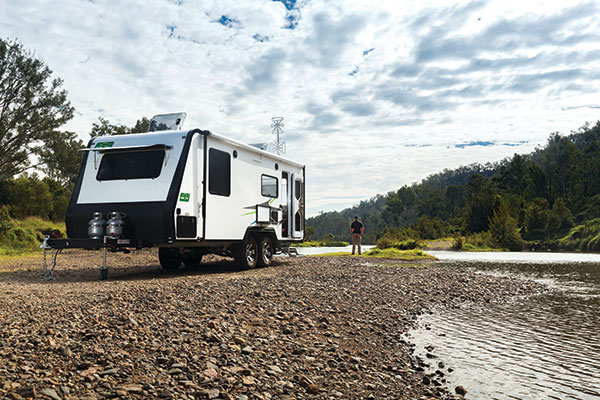 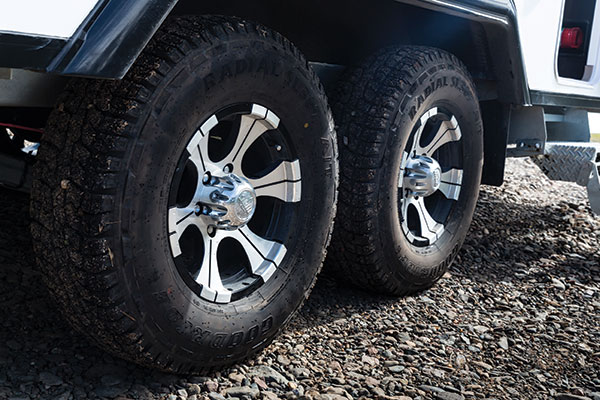 It’s a tough ask to match the sort of testing AL-KO do on the whole van. But we dragged the van through the river, across untold river rocks and up on to a gravelly island. The combo of a tow vehicle with all the chutzpah we needed, and the van with its local-made chassis and suspension handled the rough and tumble of the drive very well.

On the downside, however, the Byfield sports a 50mm ball hitch as standard. An all-terrain hitch would do a better job providing articulation, which would mean even better handling over the unpredictable bumps and thumps of offroad action. The good news is that AUSRV will happily upgrade it to a more suitable hitch if you want one.

Nonetheless, with an ATM of 2900kg, this 22ft van still needs a large tow vehicle akin, especially if you want to max out the generous 600kg payload. It’s an ambitious goal, given there’s still over 400kg for personal bits and bobs even after you fill up the two 85L water tanks and twin 9kg gas cylinders.

AUSRV might have tapped into the caravanning zeitgeist with this club lounge design. Long a staple of the motorhome fraternity, a club lounge comes around in caravan design trends every now and then. It seems to have gained some traction with caravan designers once more, and with the Byfield, AUSRV is on trend.

In this van, the club lounge is comfy, well-made and offers under-seat storage space. It’s arguably got more dining space than you’d normally find in the dining area of a van with a dinette-style layout in the centre. And the table can drop down to form a bed for an extra guest if you option in a mattress insert – however, it wasn’t in the standard kit I had down by the river.

Moving from the lounge to the kitchen, the van boasts ample bench space, a matte black sink with a tall mixer tap, ample cupboards and drawers, and a Dometic combo four-burner gas cooktop, oven and grill. There’s also a 240V microwave and a 190L Dometic three-way fridge, together with a bench height pull-out pantry. All up, the kitchen equipment combo should keep any would-be travelling gourmet happy. If you like the shine of stainless steel around the kitchen then you’re likely to view the industrial look of the black sink as a bit of a downer. All of the cabinetry throughout the van is manufactured at the AUSRV factory in Brisbane and is good quality. However, it would be nice to have self-closing drawers.

Although the split ensuite set conveniently between the kitchen and bedroom is well-designed including a washing machine and storage space for toilet and shower supplies, the shower is a tad on the small size.

A larger chap like me needs just a little more space in which to turn to pick up the soap. On the upside, the details are important and an elegant liquid soap dispenser and toothbrush holder are nice touches.

Despite being a relative newcomer to caravan manufacturing, AUSRV’s Byfield All Terrain, as a base model, is a good start. It’s on trend, light and, build-wise, is high quality.

While some might find its $95,000 price tag a little too steep, it does reflect the cost of the quality build on offer.

This model is a good intro to AUSRV’s Byfield XT, which pumps up the price to a smidge over $100K by including things like dual shock AL-KO offroad suspension, full-length raptor protection, full drawbar toolbox, slide-out kitchen and Maxtrax recovery tracks.

Keep an eye on AUSRV. If the Byfield is anything to go by, its products are well-rendered and priced at the quality end of the market.

For those looking to play in the market at the $90-$110K price band – it’s worth considering. As for Fernvale, I’ll go back for the river and the pies.