Coromal Windsor Caravans has been around a long time, and is largely associated with conventional caravan manufacturing. So when the company produced it’s Hybrid 390 Tourer and the XC offroad version at the Sydney caravan show earlier this year, it was a pleasant surprise.

The Tourer and the XC models have similar body designs but the XC has an uprated suspension system and a few heavy-duty storage boxes on the front drawbar.

My review 390 Tourer came from Coromal Windsor’s Sydney dealer, which is based at Penrith in the outer western suburbs of Sydney and very handy for a trip to the Blue Mountains, or as American tourists call them, the ‘Blue Hills’. The good thing about the area is that a lot of it is away from the main highway and is actually national park. There are quite a few great little spots to discover, including one or two in the back blocks of Blackheath. 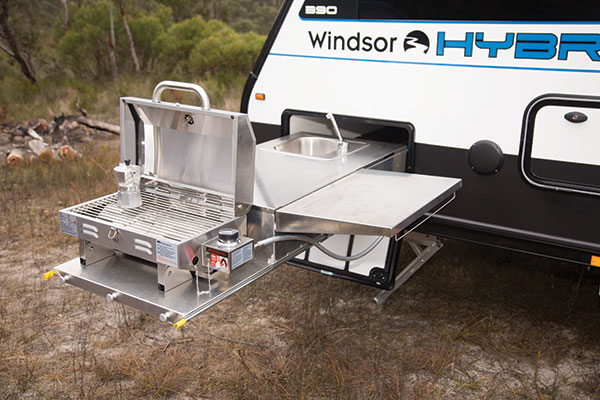 But back to the 390 Tourer. It is an interesting concept, because it’s neither caravan nor a hybrid camper trailer, but something in between. From the front, it looks like a conventional pop-top van with a rear wall entry door. But there are a few things that set it apart. For a start, the roof does lift up but it is hinged at the front and, secondly, the entire rear wall that lifts up for interior access!

The body and roof are made of fibreglass composite panels. The windows are an interesting departure from the norm. Instead of the current industry standard of double glazed acrylic awning windows, Windsor has opted for two sliding windows on either side, all made from toughened automotive glass. All are fitted with internal blinds and screens. There are advantages and disadvantages here. The glass makes sense for the offroad XC, in particular – there’s less risk of tree branch scratching on bush tracks but the windows really can’t be left open during rain.

Underneath the body, the chassis is based on one-piece 150x50mm (6x2in) main rails and drawbar. I thought it was a bit over-engineered, given the van’s Tare weight of just 1161kg. Coromal leaf spring suspension is fitted for the 15in alloy wheels which have 12in electric brakes fitted. Both the 60L water tank and spare wheel are fitted between the chassis rails forward of the wheels.

Raising the roof of the 390 Tourer is simply a matter of undoing the external rear clip and lifting. Opening the rear door is similarly simple and the final major item is the external slide-out kitchen up front.

It’s here you realise that the emphasis with the 390 is on alfresco living. Inside is a double bed up front and two sideways-facing lounges in the rear. So it is possible to sleep and relax inside, but not to cook or bathe.

With the tourer, a batwing awning on the side is an option, as is an annexe to fit around the rear door. I’d think most keen campers would be ticking both those option boxes. If nothing else, an insect screen for the rear entry is almost mandatory.

Given the size of the van, external storage isn’t too bad. There’s a full-width front tunnel boot but much of that is taken up by the slide-out kitchen. Towards the rear on the nearside, there’s another narrow storage bin which creates a large serving table when open but also a very neat rack for plates, cups, glasses and all kinds of cooking utensils. It is also the location for flatscreen TV and a radio/CD player.  A similar sized bin door is fitted on the opposite side but it doesn’t offer much in the way of storage, as it contains the 240V mains circuit breaker, 12V fuses, water tank gauge and battery monitor.

Up front, the stainless steel kitchen comes with a sink, cooker/barbecue, three drawers and a storage compartment under the sink, also a benchtop extension that is easily attached. I think I would have preferred a conventional cooker, given the limited facilities that are otherwise available, but that’s personal preference. The 390 Tourer also lacks a fridge. There’s no space inside for one, and nothing outside, unless you added a storage box to the drawbar. But you’d have to be mindful of the  additional ball weight it would add. The only other option is to carry a portable fridge in the tow vehicle or in the rear of the 390.

Inside the 390 Tourer, things are fairly simple. Up front, the double bed measures 1.91x1.53m (6ft 3inx5ft) and the bed base can be lifted up to get to the storage area underneath. Small compartments have been built in on either side and each occupant gets a reading light. Although they are located right about where they might shine into the eyes, rather than to the side. Both 240V and 12V/5V USB outlets are fitted around the interior.

Both the rear seats are quite comfortable for stretching out on and the nearside one comes with a handy drawer. A feature of interest are the sliding extensions that are fitted to each seat. I guess you get a choice of a footrest or, sans cushions, a table for drinks and nibblies.

There’s a lot to like about the Windsor Hybrid 390 Tourer. It’s an out-of-the-box design and quite different to the usual products on the market, which I appreciate.

It’s been designed for a lightweight tow vehicle and a quick weekend getaway tourer, so it requiring minimal packing. No, it’s probably not suitable for long-term touring but will certainly suit those who might want a simpler, cheaper  style of travel but still prefer solid walls to canvas.