After collecting a new pop-top Jurgens Jindabyne PT2270 bunk van from the Amazing RVs dealership in Seaford, I made tracks along the South Gippsland Highway before turning off at Lang Lang and on to the Bass Highway en-route to Kilcunda Oceanview Holiday Retreat, which is nestled between the popular seaside destinations of Phillip Island and Inverloch on the Bass Coast in Victoria.

A big part of the popularity of the Jindabyne PT2270 is its light towing weight (Tare 1407kg), allowing it to sit comfortably behind many regular family cars. And the PT2270 proved an agile 18-footer, tugged effortlessly by our Toyota Fortuner Crusade tow vehicle. The ride was smooth and steady, which was assisted by the van’s AL-KO independent rubber suspension.

Finally, after the 85km trip, I arrived at the neat-as-a-pin Kilcunda Retreat where photographer/videographer Stu and myself were greeted by the friendly holiday park managers Annette and Frank. We were joined later in the morning by my daughter Alle and my two grandchildren – Millicent, 2, and Leo, 13 weeks – and my son Patrick, 17. My wife Meredyth, who was caught up with work duties, arrived at dusk, so it was a real family affair! That night, we enjoyed a sumptuous meal at the historic Killy pub (Kilcunda Ocean View Hotel). 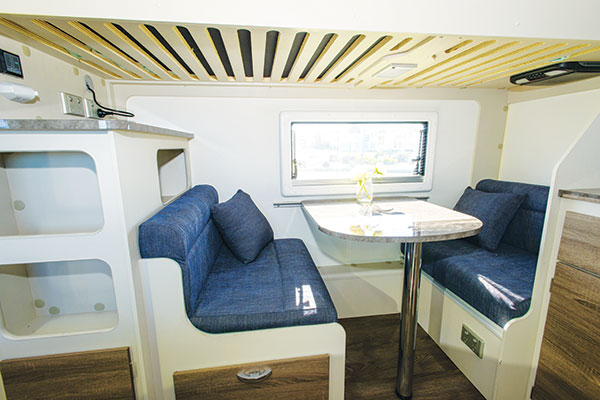 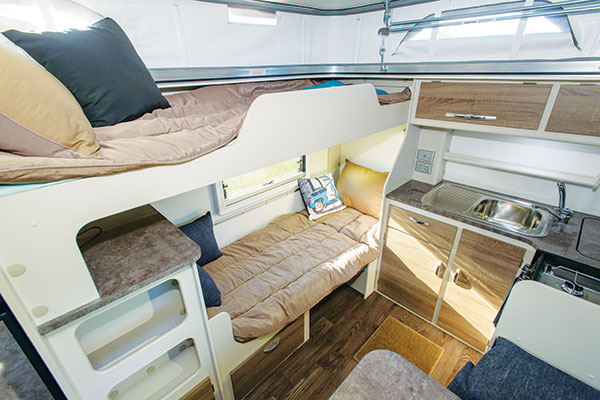 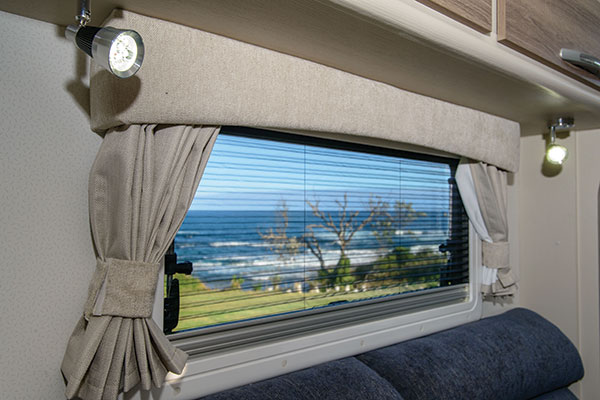 I’ve previously tested a couple of Jurgens vans and the Jindabyne PT2270 is typical of the breed – a well-engineered product with built-in strength while keeping weight to a minimum. This philosophy starts with the C-section Optima chassis and one-piece Integra floor that are bolted and bonded together to add structural integrity. The tough composite Duratherm walls are thermal and impact resistant, and also help keep the weight down along with the one-piece Uniskin fibreglass roof.

Internally, you can see Jurgens has put a lot of thought into how to accommodate a family of four in a snug little van. The double bed (6ft 3in x 4ft 8in) is comfy for parents (Meredyth and I can attest to that) and there is a plush dinette to accommodate two adults.

But where this van shines is the space dedicated for littlies. There is a dedicated bunk (6ft 3in x 2ft 6in) at the top and, below, is a cute dinette for two kids which converts to a lower bunk (6ft 1in x 2ft 6in). I thought the kids’ sleeping quarters could do with a couple of DVD players, though. Children can still get a bit fractious on tour, and completely bored and irritable if confined indoors due to inclement weather, resulting in a parental nightmare! This is mainly an issue because the Jindabyne also doesn’t have a television. Some people are hell-bent on becoming hermits when travelling but not me; I still like to get my current affairs and sports fix, be it electronic or print, along the journey.

The Jindabyne also has a functional kitchen to feed the growing family. There’s a four-burner cooktop and grill, 128L fridge/freezer and 20L microwave, but no hot water provided by the hand pump to the sink. Now, that makes washing up even more of a chore! The kitchen facilities are adequate for a short trip but you’ll do without some of the comforts of home.

I did notice the PT2270 is fitted with an optional gas bayonet, though, so take a long a barbecue and enjoy meals out under the stars! And unlike Meredyth, I’m not totally sold on the lack of an ensuite in a caravan. Yes, it means incredible living space for a van of this size, but having no bathroom means the inconvenience of compulsory trips to the amenities block when nature calls or to shower.

But what the PT2270 does have in spades is the ability to provide special times that build cherished, lifelong family memories! If we had a few more days up our sleeves, I would dearly have loved to have taken Millie on a waddle to the wild side to see the penguin parade on Phillip Island, and also the daily pelican feeding at nearby San Remo pier. I know Patrick, being a teenage rev-head, was more than keen to visit the Grand Prix track – home of the Australian MotoGP – where you can also go-kart. Meanwhile, Meredyth had her eyes firmly set on a few of the Bass Coast’s finest vineyards along the Southern Gippsland Wine Trail.

During our trip, we took the Jindabyne for a spin around some dirt tracks near the mouth of the Powlett River, and gained the attention of some inquisitive locals. One ‘Kilcundan’ even came over for a sticky beak at the PT2270 and returned to his property suitably impressed.

The Jurgens Jindabyne has been a successful little couples’ pop-top for a number of years. But now they have reinvented it as a clever bunk family van pitched at the budget end of the market. The new release PT2270 bunk bed model cuts the mustard in terms of not needing a big tow vehicle, smart build quality, making the most of space for families and, above all, price! As Jurgens justifiably spruiks, “it even has room to take the kids”.

Okay, there’s no shower and toilet or solar, so you’re predominantly confined to caravan parks. But the Jindabyne’s strength and its light weight give it bona fide dirt-road capability. And I reckon it represents excellent value for money, coming in at  under $40,000 with a handful of options fitted. (It is good to know the following items, while not supplied standard, are also optional - DVD player, TV and hot water service (for hot water to sink).